Dana White doesn't want to talk about Jorge Masvidal. Why would he when he can talk about Conor McGregor v Khabib Nurmagomedov?

The cynic in you would say he can't see past the dollar signs but he'd be doing a bad job if he kept looking past them.

He has a generational fight on his hands, he has a superstar he likened to Mike Tyson and even Muhammad Ali so he's going to put him front and centre at every opportunity.

So after McGregor's 40-second destruction of Cowboy Cerrone, the president of the UFC had only one fight on his mind.

END_OF_DOCUMENT_TOKEN_TO_BE_REPLACED

For Dana White, it's the only fight that makes sense.

McGregor has predicted that the Nurmagomedov v Tony Ferguson fight won't take place and has said he'd be willing to fill in when Ferguson pulls out. White, obviously, said he'd be up for that but he thinks the rematch is going to happen one way or another.

And definitely ahead of a potential bout with Jorge Masvidal.

"Going into the Khabib fight, Conor had lots of personal stuff going on - a lot self-inflicted - and he had injuries," Dana White said in the UFC press conference.

"He has been obsessed with getting that rematch because he knows he wasn't 100 per cent right.

"If Conor and Masvidal fight, none of them even have a title."

Dana White explains why Conor McGregor and Khabib rematch is the fight to make over Jorge Masvidal. Says, regarding McGregor vs Masvidal: none of them has a title #UFC246 pic.twitter.com/lrwyS8fvuN

END_OF_DOCUMENT_TOKEN_TO_BE_REPLACED

After McGregor's first win since 2016, he's the money fight again and that draws out the money-grabbers, like Floyd Money Mayweather.

Of course, Mayweather doesn't really care who he fights. As long as he gets paid.

White confirmed that the UFC have been in talks with Mayweather and suggested that another fight with McGregor will be in the making at some stage but, for now, he's hell-bent on ensuring the Khabib rematch happens. Wherever it has to happen.

Dana White was open to all possibilities and he went through them.

Three of the venues discussed for the Nurmagomedov v McGregor rematch are situated in the UK and White was explicit when he said it would not be taking place in Russia.

"Nope, it ain't happening in Moscow," he said.

"I think the Khabib/Conor fight could take place anywhere.

"Unfortunately, Khabib is not a big Vegas fan. We have to sit down and look at what makes most sense."

Of course, McGregor was wondering where the talk of those three UK venues were coming from when Croke Park in Dublin is an 82,000-seater stadium with a bigger pitch than Wembley. 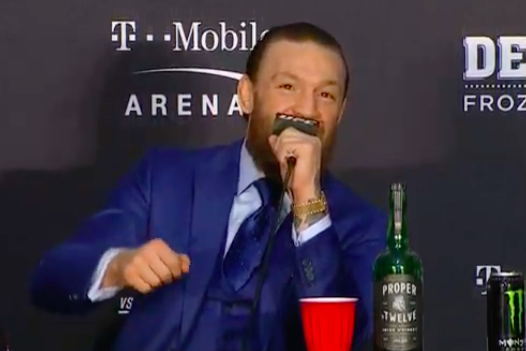 White did stress that he would be keen to diffuse the rivalry between both camps, if a rematch was to happen. He said it's something that the company would need to control and ensure there are no repeats but also that the build-up isn't as hate-fuelled as it was the last time.

"I think he was a lot happier," he said of McGregor.

"What I saw this week was a guy who was happy and re-energised and happy to be here and back in the Octagon.

"When the whole Khabib/Conor press conference was happening, I was thinking this is super weird. It was really dark.