Tony Ferguson says he is hungry. He proclaims he is ready. He believes he is the real deal.

To Conor McGregor, Ferguson is all talk.

The UFC lightweight champion claimed his title the week after Ferguson defeated former champ Rafael Dos Anjos in Mexico City. Neither man has fought since.

McGregor took some time out to recharge the batteries, pursue a multi-million euro fight with boxing legend Floyd Mayweather Jr. and to feather the nest for his newborn son, Conor McGregor Jr. Ferguson was supposed to headline UFC 209 but Khabib Nurmagomedov's botched weight cut saw that interim title bout scratched.

'El Cucuy' is now angling for an interim title fight against Nate Diaz, Al Iaquinta... anybody, but McGregor seems far from impressed.

UFC president Dana White revealed he received a text message from McGregor in the lead-up to UFC 209. Ferguson had been offered a catch-weight fight against No.6 ranked lightweight Michael Johnson but refused as it was not for a title and for a lower purse. During an appearance on GGN News, White commented:

"You know this s**t that went on with Tony Ferguson and Khabib, right?

"Conor text me and said, 'I can't believe you're going to f**king pay that bum Tony Ferguson one dollar. You shouldn't pay that guy one f**king dime.' 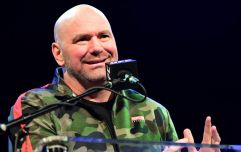 END_OF_DOCUMENT_TOKEN_TO_BE_REPLACED

We suspect White was paraphrasing somewhat [above] but the sentiment sounds very much like McGregor - take the fight or shut your mouth.

It is hard not to feel for Ferguson here, though. He was in line for a title shot, had it whipped away at the last minute and was offered a non-title fight for less money.

One wonders what McGregor would have made of such a proposal at the time.