Our very own Conan Doherty sent us a message this morning.

"I might be a bit late lads. Just watching the fight now."

Seconds later, the next message arrived.

END_OF_DOCUMENT_TOKEN_TO_BE_REPLACED

UFC 194's main event was over that quickly. Conor McGregor knocked Jose Aldo out - ending his 10-year unbeaten streak - with the first punch he landed.

Aldo was out on the way down and, when McGregor pounced to finish him off, referee John McCarthy jumped in to end the fight.

All told, it was done and dusted after 13 seconds.

That means The Notorious now holds the UFC record for fastest ever knock-out in a title fight.

His impressive marker overtakes the 14 seconds it took for Ronda Rousey to defeat Cat Zingano at UFC 184. 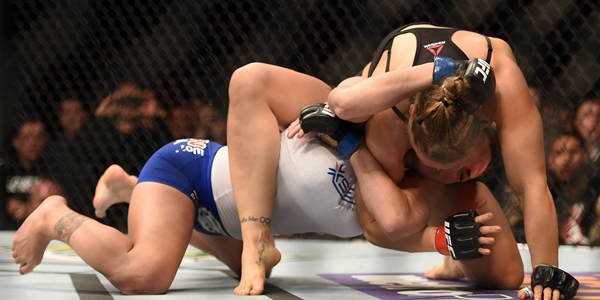 END_OF_DOCUMENT_TOKEN_TO_BE_REPLACED

The other fighters to achieve such a goal are Chuck Liddell, Mike Brown, Ricco Rodriguez, Tiago Alves, Junior Dos Santos.


popular
World Cup 2022 Day 13: All the major action and talking points
Shay Given on how far Ireland could've gone at the 2002 World Cup with Roy Keane in the team
From Ireland to Argentina: Alexis Mac Allister's Irish roots explained
The SportsJOE Friday Pub quiz: Week 3
France demand FIFA change result of World Cup defeat over 'rule break'
Jack Grealish says he regrets his comments about Miguel Almiron
The World Cup 2022 team of the tournament so far
You may also like
2 months ago
Hasbulla signs five year deal with UFC 'worth more than many fighters'
2 months ago
UFC fighter Elias Theodorou has died, aged just 34
2 months ago
John Kavanagh and Johnny Walker kicked out of T-Mobile Arena during UFC 279 main card
2 months ago
Conor McGregor took exception to one part of Nate Diaz victory speech
2 months ago
Nate Diaz and Tony Ferguson tossed together for UFC 279 main event after wild 24 hours
3 months ago
Your guide to a huge weekend of sport and how to watch it all
Next Page