"I've had an insane couple of days."

Sounds like nothing much is changing for Conor McGregor.

Over the St Patrick's Weekend (because it's more than just a day, this year), Conor McGregor was in Chicago at a fundraising event for First Responders - "The people that rush into buildings as we're rushing out" - and headed to Boston to drop a puck at a hockey game.

He also attended the Chicago parade and paid tribute to the city's plumbers' union for extending him an invite. "I used to be a plumber back home, in Ireland," he told ABC 7, "and it's not an easy job... the plumbers are the ones that dye the river green, too, so big respect to them." 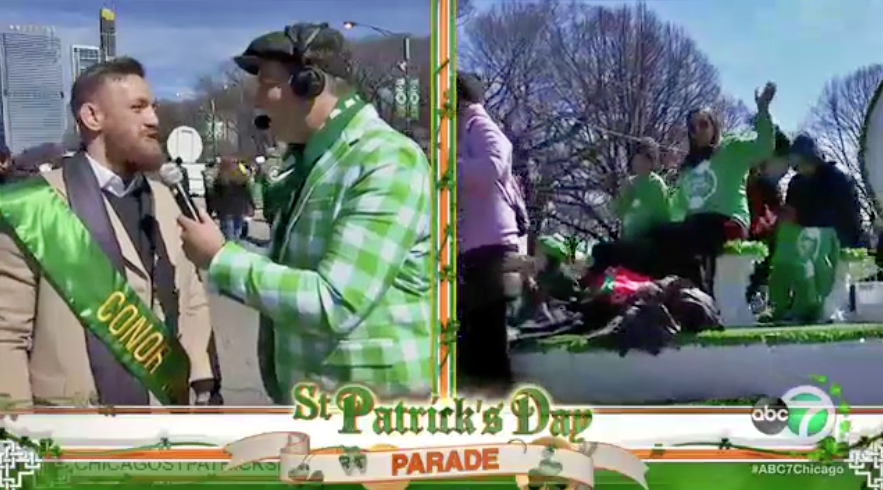 After joking about returning home to begin a campaign for a whole week of St Patrick's celebrations, McGregor was asked if he would be fighting again soon.

"We’re currently in negotiations," he responded.

"We’re aiming for July so we’ll see what happens. I am staying ready. This morning I was doing incline sprints on the treadmill on my program, the McGregor F.A.S.T. program, staying in a hotel room.

"So we’re staying on it. Getting work in as we go."

A fight in July would rule out an immediate rematch against lightweight champion Khabib Nurmagomedov, who defeated him last October at UFC 229.

END_OF_DOCUMENT_TOKEN_TO_BE_REPLACED

'The Notorious' looked all set to face Donald Cerrone but, according to 'Cowboy', that fight hit the skids when the UFC attempted to schedule it as a co-main event. That would mean putting a title fight on the cards and sharing the pay-per-view points.

As the biggest draw in the sport, McGregor has seemingly moved past co-main event status even when he’s not competing for a title but it’s impossible to say right now what options have been presented for his next fight.

McGregor mentioning July would seem to indicate his potential involvement in the UFC's International Fight Week 2019 in Las Vegas. That week is the biggest in the promotion's calendar and their bout-makers like to stack the PPV card for the main showpiece, UFC 239 (T-Mobile Arena on July 6).

Al Iaquinta was on the Ariel Helwani MMA Show, on Monday, and told the host he has been promised 'a big fight' by the UFC. 'Raging Al' went the distance with Nurmagomedov at UFC 223 and has also been angling to take on McGregor.

Another option could be McGregor taking on the winner of UFC 236's interim 155lbs title fight between two men he beat when they all used to be featherweights, Dustin Poirier and Max Holloway.

popular
The SportsJOE 12 o'clock quiz | Day 76
SportsJOE 2000s Football Quiz | Round 4
The SportsJOE 12 o'clock quiz | Day 75
The controversial reason Conor McGregor's win over Nate Diaz was not unanimous
UFC heavyweight Brendan Schaub claims he was too much man for Ronda Rousey in relationship
UFC 197 salaries revealed and Jon Jones earned a whole lot more than everyone else
SportsJOE 2000s Football Quiz | Round 3
You may also like
3 weeks ago
McGregor the fighter just couldn't help himself
3 weeks ago
"I'll go to Ireland; do what I gotta do" - Gaethje has plans for McGregor after title fight
3 weeks ago
Justin Gaethje demolishes Tony Ferguson to claim interim title
3 weeks ago
Donald Cerrone loses fourth fight in a row amid eye-poke controversy
3 weeks ago
Jacare Souza pulled from UFC 249 after positive Covid-19 test
1 month ago
"Donald showed up; Cowboy wasn't there. The wrong guy showed up"
Next Page