He wants to fight Khabib again.

Conor McGregor has tweeted for the first time since his defeat to Khabib Nurmagomedov at UFC 229 in Las Vegas, and he has called for a rematch.

The Dublin fighter lost to the undefeated lightweight champion after a fourth-round submission on his return to the octagon for the first time since November 2016.

END_OF_DOCUMENT_TOKEN_TO_BE_REPLACED

It was a dominant win for Nurmagomedov. The lightweight champion was leading by three or four points before the submission - (39-35 or 39-36, depending on the judge). He forced the tap from the Irishman with a tap after applying a neck crank.

McGregor's call for a rematch may be complicated by the ugly scenes that followed the bout.

Khabib ruined a brilliant performance when he jumped into the crowd after beating McGregor and started on Dillon Danis. 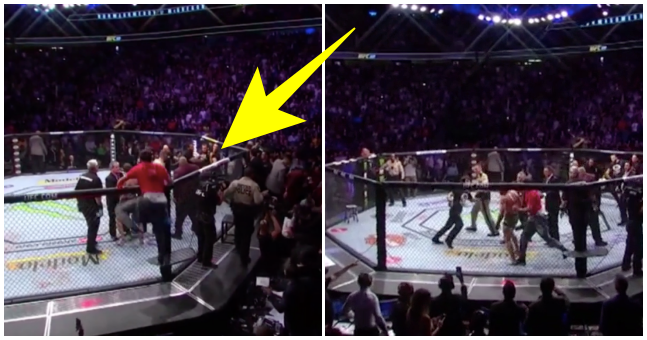 Conor McGregor jumped from behind as he recovers from loss

"That was disgusting." Joe Rogan absolutely nailed it after chaos erupted after the UFC 229 main ...

The Dubliner was then attacked from behind in the cage. In the press conference following the fight, Nurmagomedov, who is having his purse for the bout withheld, turned the focus back on his opponent, saying he had disrespected him.

"First of all I want to say sorry to Athletic Commission. Sorry to Vegas," he said.

"Why are people taking about jumping on top of cage. This is a respect sport. This is not a trash-talking sport. You cannot talk about religion or nation. For me, this is very important."


popular
"I trained with a guy that was born in 2004 the other day. We reckoned Earlsie could be his father!" - Peter O'Mahony
Nigel Owens on most annoying players to referee (three of them are Irish)
"I asked one question and lads slagged the arse off me!" - Johnny Sexton on Roy Keane chat
What is the story with Tyrone clubs' woeful record in the Ulster championship?
Six All Blacks but no Ireland players in world's top 20 list headed by Antoine Dupont
The story of the GAA's greatest ever minor
Longford GAA movie explores the tale so many young footballers can relate to
You may also like
1 month ago
"The Irish are back, baby!" - Ian Garry pays tribute to McGregor after UFC victory
1 month ago
José Mourinho swaps Conor McGregor a Roma jersey for some whiskey
2 months ago
Conor McGregor nearly hits Chicago Cubs fan with wild first pitch at Wrigley Field
4 months ago
What are the dark circles on swimmers backs at Tokyo Olympics?
4 months ago
UFC legend brands Conor McGregor's antics a 'cry for help'
4 months ago
Joe Rogan sends McGregor invitation after explaining that post-fight interview
Next Page