Three years ago, Jose Aldo looked me in the eye and told me he would never be friends with Conor McGregor.

Remarkably, this conversation in Dublin's Convention Centre occurred before Conor McGregor shocked the world with that 13-second knockout. Considering how the consensus greatest featherweight champion ever reacted to losing his belt to the Dubliner, I don't think it's unfair to say that the loss and all the mental warfare building up to it broke Aldo. Even if subsequent wins proved he was only temporarily fragmented.

Aldo's frustration was understandable. After UFC 194's headliner, McGregor leaned over and promised him a rematch inside the cage. That rematch would never come but Aldo kicked up a real fuss to try to force it.

In 2016, 'Scarface' announced that he requested a contract termination. He then announced his intention to leave MMA entirely and pursue other options because the sport had 'lost its way'. His coach Andre Pederneiras even suggested that he would be willing to take the fight to court if the promotion refused to grant him a chance at revenge. If that didn't work, Aldo shockingly suggested deliberately throwing fights in an effort to get his way.

It got real ugly, real fast. Aldo undoubtedly suffered some reputational damage for throwing the toys out of his pram. 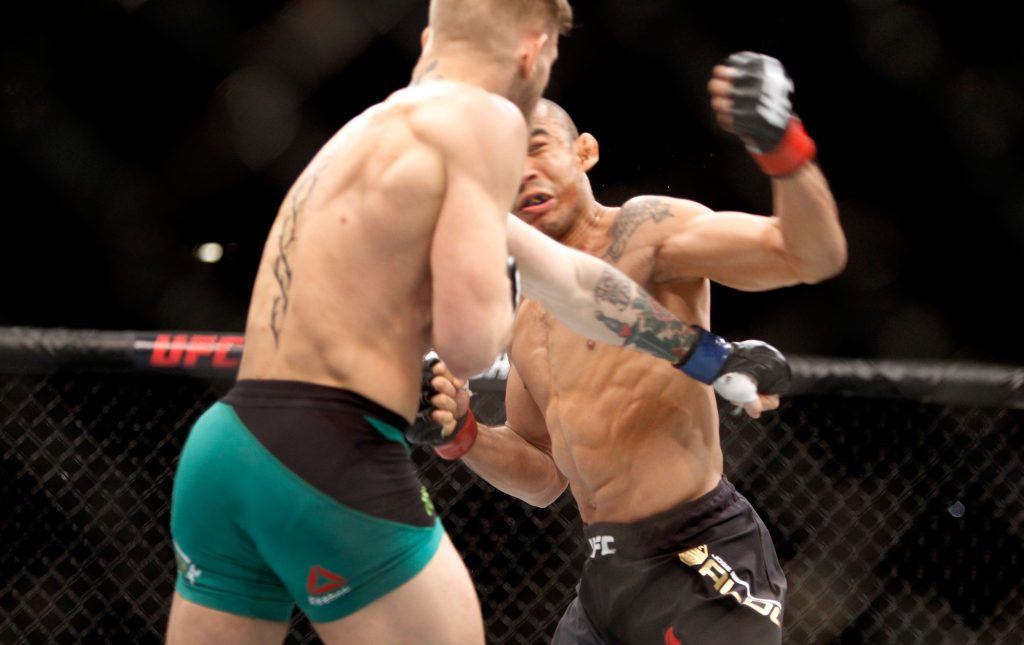 Aldo bounced back to win the interim strap with a phenomenal decision victory over Frankie Edgar at UFC 200. Then, for the first time in his career, he suffered back-to-back knockout losses. On both occasions, Max Holloway beat him to a bloody pulp before the referee stepped in. If there was a glimmer of hope that Aldo may return to his reign of dominance at 145 lbs in McGregor's absence, 'Blessed' put these thoughts to bed with heavy fists.

It was the manner in which he lost to Hawaiian that saw him finish as a slight betting underdog against Jeremy Stephens at UFC Calgary. 'Lil Heathen's penchant for throwing wild shots with reckless abandon makes him a dangerous opponent for any featherweight. However, Aldo stepped forward into the line of fire and dropped him with a thunderous liver shot in the very first round.

His first ever non-title fight in the UFC went about as well as could have been expected. He wept tears of joy inside the Octagon, a cathartic response to snapping a tough losing streak.

Even the most hard-nosed 'Just Bleed' MMA fanatic got a lump in their throat seeing Aldo's celebrations. The man he'll never be friends with was also delighted for him, as he told TMZ.

"I'm so happy for him. Honestly, truly happy to see the joy he had after it. It's a crazy business and I know he's gone through a lot of stuff. So to see him come back with that great finish, I was very happy for him and his coach Andre Pederneiras. The whole of Ireland was happy for Jose Aldo that night."

Respect is earned through battle.


popular
The SportsJOE 12 o'clock quiz | Day 134
"It's not about winning at underage. It's about building players and building people"
"Me and him used to room together, and he was a bit of a nightmare"
Excitement in Mitchelstown as Cork man set for AFL debut at 20
A starting XI of the best free agents available this summer transfer window
The SportsJOE 12 o'clock quiz | Day 133
Here's how much Shane Lowry earned for an excellent, if ultimately disappointing, weekend at Oakmont
You may also like
3 weeks ago
Max Holloway's class gesture after controversial UFC 251 loss transcends the sport
1 month ago
Dana White faces more retirement questions after Garbrandt and Nunes victories
2 months ago
Justin Gaethje tells Conor McGregor to wait his turn
2 months ago
McGregor the fighter just couldn't help himself
2 months ago
"I'll go to Ireland; do what I gotta do" - Gaethje has plans for McGregor after title fight
2 months ago
Justin Gaethje demolishes Tony Ferguson to claim interim title
Next Page