"I'll go to Ireland; do what I gotta do" - Gaethje has plans for McGregor after title fight

We could get that long-awaited Croke Park fight after all...

The prospect of a Gaethje McGregor rumble later in 2020 is enough to get most fight fans salivating. But first, a date with 'The Eagle'.

Justin Gaethje has his eyes on the main prize in the UFC's lightweight division and Conor McGregor - for so long the coveted fight across multiple divisions - was not mentioned by name.

END_OF_DOCUMENT_TOKEN_TO_BE_REPLACED

'The Highlight' picked Tony Ferguson apart in the main event of UFC 249 in Jacksonville, Florida before finishing the former interim champion off in the fifth round. Gaethje claimed interim gold of his own when referee Herb Dean stepped in to put a halt to a brutal assault that Ferguson was somehow still standing for.

The Colorado native had the interim belt strapped around his waist by UFC president Dana White but quickly removed it and handed it to his coach to look after, declaring to Joe Rogan, "I'll wait for the real one."

By the time he had some cuts and bumps attended to, Gaethje arrived for the post-event press conference and set out his goals for the months ahead. He is looking to claim the undisputed lightweight title by fighting champion Khabib Nurmagomedov in the summer.

After that, he will happily take a run at McGregor and does not mind if he has to go travelling to make it happen. He told reporters:

"I want the biggest challenge in the world, that's Khabib Nurmagomedov.

"USA vs Dagestan, and then I'll go to Ireland; do what I gotta do."

END_OF_DOCUMENT_TOKEN_TO_BE_REPLACED

With travel restrictions in place for several countries, due to the Covid-19 pandemic, it remains to be seen when Nurmagomedov and McGregor may be able to head off for fight camps and bouts, even if they wanted to.

McGregor is not the only UFC fighter that will be following the three planned Florida fight nights to see how the promotion is dealing with tests, social distancing a event production. A major advocate of the stay-at-home measures during this pandemic, perhaps a Gaethje bout on the Dubliner's home turf would tempt him to step into The Octagon again, be that later this year or in 2021.

Earlier in the day, on Saturday, McGregor and Nate Diaz had gotten into a slagging match on Instagram but White insisted no trilogy bout was in the offing. As for the main event, White was almost more in awe of how Ferguson was not knocked unconscious after Gaethje uncorked his full arsenal. White commented:

"I don’t want to take anything away from Gaethje, because he fought an incredible fight, but I thought Tony looked off tonight. I thought he looked slow, and I would have to imagine that cutting weight twice in a month will affect you. So I don’t know if that’s it or what.

"The guy isn’t human. He’s got a chin. Nobody takes Gaethje’s punches like that – nobody I’ve seen since I’ve been watching Gaethje fight. But this kid did." 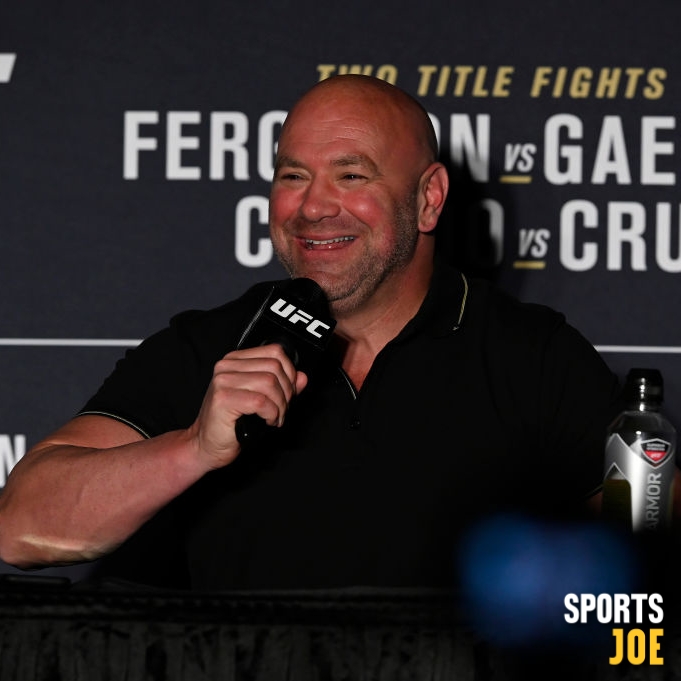 White claimed UFC was a great success in terms of fighter and staff safety, PPV numbers and media coverage. He boasted that ESPN 'should have listened to me three weeks ago' when they forced him to delay UFC 249 from its' original April 18 date.

White declared that the positive Covid-19 tests for fighter Jacare Souza and two of his cornermen were part of a 'home run success' in terms of testing and removing compromised fighters from the card. He did admit, however, that trying to control all those working at and participating at UFC 249 was not yet an exact science.

On Jacare, who was supposed to be isolating himself pending test results, mingling with others before his weigh-in [for a fight that was strick from the card], White said:

Two more UFC events are planned at the Vystar Veterans Memorial Arena in Jacksonville in the next week - Wednesday, May 13 and Saturday, May 16.


popular
Mario Balotelli, Luis Suarez, Fernando Torres and why Rio Ferdinand "hated them"
"I don’t trust you" - Joey Barton delivers brutal dismissal of Irish defender
"I remember just hugging this Irish guy" - How one Kiwi rugby star reacted to Ireland's historic series win
Javier Hernandez offers to play for Manchester United for free
Down county football is in tatters, but Conor Laverty is the man to piece it back together
"I'll ask for everyone that comes to the game to wear purple and roots for us" - Pat Fitzgerald
Amad Diallo scores twice as Cristiano Ronaldo sits out behind-closed-doors friendly
You may also like
1 month ago
Jorge Masvidal speaks about defending BMF title against Conor McGregor
2 months ago
Dana White reveals who Conor McGregor could fight on UFC return
2 months ago
Your guide to a great weekend of sport and how to stream it all
2 months ago
Conor McGregor says he knows his next UFC opponent and fight date
3 months ago
Commentating cage-side, Daniel Cormier missed the UFC knock-out of the year
3 months ago
Conor McGregor responds to Michael Chandler's callout after UFC 274
Next Page