You lose a featherweight title, you gain a professional boxing licence.

It's been a typically unpredictable week in the always entertaining life of Conor McGregor, whose licensure by the California State Athletic Commission made headlines and got fight fans salivating at the prospect of witnessing the much-publicised clash with Floyd Mayweather.

While Mayweather himself remained quiet on the matter, his camp responded to the news by suggesting that the UFC would never allow 'The Notorious' - their most reliable cash-cow - to step foot in the ring with the 49-0 retiree.

END_OF_DOCUMENT_TOKEN_TO_BE_REPLACED

The oddsmakers agree somewhat with the assertion from Mayweather Promotions CEO, Leonard Ellerbe, but McGregor is unsurprisingly confident in his abilities and broke his silence on his brand spanking new boxing licence while speaking at a Q & A event this week.

"If I focus, with the work ethic that I have, solely on the sport of boxing then there’s no telling what I could do," McGregor said. "I would not go in there just to show up, I’d go in there to knock him [Mayweather] out and that's it.

END_OF_DOCUMENT_TOKEN_TO_BE_REPLACED

"There’s a lot to lose for them, so that’s why their scrambling and saying 'McGregor's got the boxing licence, Floyd's in the Bahamas and he doesn't give a fuck.' They're scrambling right now. 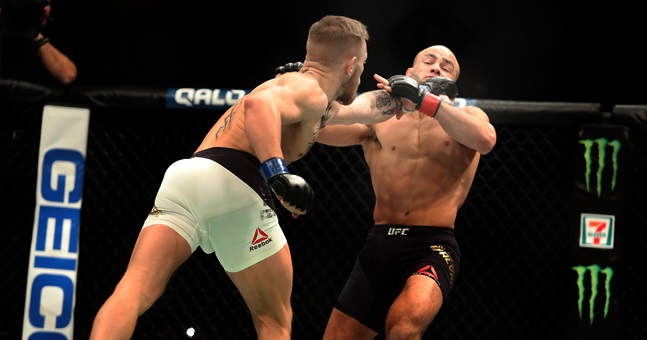 "But that’s okay, I’ll leave them scrambling. I’ve got some other boxing opportunities and potential opponents in mind, some previous Floyd opponents. They can bring in anyone in the game. We’ll see what happens."

END_OF_DOCUMENT_TOKEN_TO_BE_REPLACED

McGregor is adamant that his pursuit of a boxing career is a legitimate one and not just an attempt to gain leverage against the UFC by letting them know that he could swap the Octagon for the ring.

And given the Dubliner's unprecedented drawing power, one can't blame opportunistic boxers for throwing their names in the reckoning when it comes to welcoming McGregor to the squared circle.

Former two division world champion Paulie Malignaggi was quick off the marks to offer his services by announcing that he'd "knock the beard off you homie!"

Got to thinking about this @TheNotoriousMMA situation... I'm interested. Wanna get into #boxing, I'll introduce you to how our side lives... pic.twitter.com/s79aYMZl5L

But McGregor fell back on arguably his greatest ever put-down when a response was asked of him at the Northern Ireland Q & A.

"Who the fuck is that guy?" McGregor roared, to the raucous laughter of the crowd.

"I don’t know who the fuck that is but I’ll slap the nose off him if he ever mentions my name again."
Michael Lundy joins Wooly for a wide-ranging discussion that starts with a chat about Ger Loughnane, dodgy transfers and Davy Fitzgerald's training methods. Subscribe here on iTunes.