To say that Conor McGregor is obsessed with mixed martial arts would be an understatement.

The UFC interim featherweight champion barely has time to think about anything other than the fight game and he's explained that it's taken over his life so much that he's hardly able to hold a regular conversation nowadays. 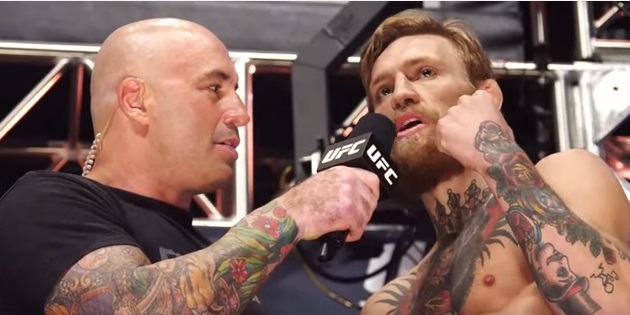 In a chat with Gareth A. Davies for BT Sport, The Notorious has explained his mindset.

"I feel to be at the pinnacle of any game, you have to be a little bit gone. You're not all there. You've got to be almost insane to your craft. Not a lot of people understand that.

"And normal society is like 'let's talk about this, let's engage with this' and I just can't do it.

"People are talking to me and in my head I'm counting something. I'm counting up a number or I'm knee-deep in a sequence on the mat or on the feet.

"That's my life. Sequences and numbers. Nothing else. I cannot pay attention to nothing else."

popular
"They're so far ahead of where I was at 18, it's just off the charts in terms of gym and fitness tests"
"I don't know if the management know what their best 15 is" - Worrying times for Tyrone going into the championship
Damien Duff bides his time before roasting the FAI with 'motivational video' comment
Ronaldo removes Coke, shows off the drink of champions in pre-match conference
Can't imagine Rangers fans were happy about what Ronnie Whelan called Scotland
Euro 2020 Quiz: Group F
Christian Eriksen's first words from hospital are a credit to the man
You may also like
4 weeks ago
Conor McGregor sends message to new UFC lightweight champion
1 month ago
Conor McGregor sells majority share in whiskey company in $600m deal
1 month ago
Chris Weidman snaps leg in half while kicking opponent after just 17 seconds
1 month ago
Daniel Cormier clashes with Jake Paul during UFC 261 broadcast
1 month ago
Kamaru Usman makes Jorge Masvidal eat his words with devastating KO
2 months ago
McGregor and Poirier relationship turns sour over $500,000 donation
Next Page