We want a trilogy.

You want a trilogy.

The moneymaking potential would lead you to believe that both Conor McGregor and Nate Diaz should want a trilogy.

So hopefully that comes to fruition before the career paths of both men grow any further apart.

We were treated to one of the greatest rivalries in UFC history in 2016 as McGregor and Diaz went 1-1 in their pair of welterweight clashes. 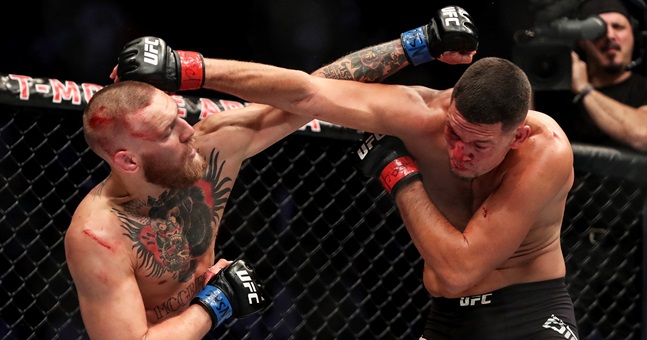 Diaz shocked the world by coming in on days notice to submit 'The Notorious' in the Irishman's first defeat in the Octagon at UFC 196 before McGregor avenged that loss with a gruelling majority decision over his Stockton foe in August.

END_OF_DOCUMENT_TOKEN_TO_BE_REPLACED

Talk has quietened about the rubber match; due in no small part to McGregor's new status as UFC lightweight champion, his decision to step away from the sport for a number of months and his continued toying with the notion of stepping through the ropes to meet Floyd Mayweather.

Diaz is not in McGregor's immediate future, that much is clear, but the Dubliner admits that he still thinks of the former TUF winner and, in fact, it's got to do with Diaz's new friendship with Mayweather.

Last month, footage emerged of Diaz speaking with the retired boxing great via Facetime in a conversation during which the pair took shots at McGregor.

END_OF_DOCUMENT_TOKEN_TO_BE_REPLACED

And that, according to 'The Notorious', was the final straw.

"Nate’s a bitch. Nate’s a fucking bitch, and let me tell you why," McGregor said at a Q&A event in Manchester this weekend. "I had the biggest respect for Nate – and I still have big respect for Nick, he’s out doing his thing – but when [Nate] took that phone call or that video call from Floyd Mayweather, and was like, ‘hello Floyd’s fans,’ he was Floyd’s bitch that night. I was like, you fucking pussy. You absolute pussy.

"When he had that video call, he should’ve been on the other end of that line, and when Floyd was saying ‘you made McGregor tap out,’ he’s like, ‘yeah I did,’ and Floyd is saying, ‘I’m going to finish the job’ — he should’ve said, ‘shut your fucking mouth or I’ll strangle you too,’ and then post that everywhere.


popular
Sean Dyche set to be named Everton manager after Marcelo Bielsa talks break down
Roy Keane flatly rejects longstanding perception of ex-Man United midfielder Paul Ince
Allianz National Football League Round 1: All the action and talking points
Roy Keane leaves ITV pundits in stitches after Pep Guardiola's pre-match interview
Conor McGregor hit by car ‘at full speed’ while cycling
The two toughest calls in Ireland team to face Wales are in the backline
Quiz: Identify these 15 football clubs that are not named after a place
You may also like
1 month ago
Ariel Helwani shares Paddy Pimblett WhatsApp messages as spat becomes public
1 month ago
Conor McGregor savagely hits back at Joe Rogan following PED comments
2 months ago
"There’s a new Irish superstar in town" - Young Derry fighter touted for UFC after big title win
2 months ago
Conor McGregor almost unrecognisable after shaving off iconic beard
3 months ago
Dana White confirms Conor McGregor is not in the USADA testing pool
4 months ago
Hasbulla signs five year deal with UFC 'worth more than many fighters'
Next Page