Nate Diaz has been called a lot of things in his career but 'Homer Simpson' likely isn't one.

That is until Conor McGregor decided to pull a Simpsons reference from his arse when discussing the first fight against his Stockton rival at UFC 196.

McGregor suffered his first UFC defeat at the March 5 event when he gassed after an impressive first round, only for Diaz to take advantage of a visibly fatigued fighter with a second round submission.

And 'The Notorious' believes their first encounter is reminiscent of the below episode of the fan-favourite cartoon, where Homer Simpson's ability to sustain punishment earned him a successful stint in boxing.

END_OF_DOCUMENT_TOKEN_TO_BE_REPLACED

"You ever see that episode of The Simpsons where Homer starts boxing?" McGregor said on Friday. "He's competing, he's just sitting in the ring and getting the head slapped off him. Boom, boom, boom. And then just the guy can't punch him no more. And then Homer tips him and the guy falls over.

"That was similar. That's the way Nate was in that fight. He was like Homer Simpson. 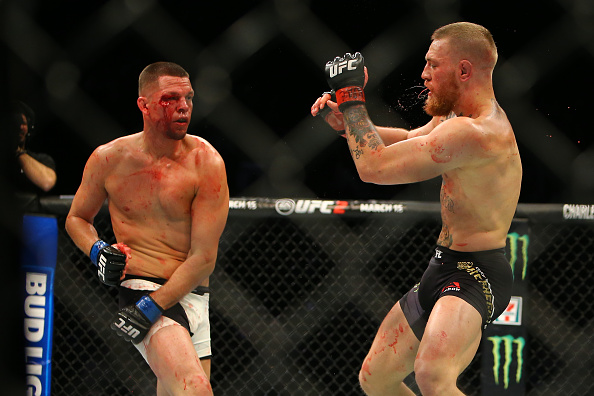 McGregor maintains that he would have been able to finish his opponent at UFC 196 if he just had a little bit more energy and insists that he has learned from his error last time around.

END_OF_DOCUMENT_TOKEN_TO_BE_REPLACED

"I feel I was close," McGregor said. "I feel like if there was a little more in the tank, I would have stopped him in the second round. So I feel I will be prepared for five. I will go in anticipating five. I didn't give him respect. He could take a hell of a smack, the boy can. But he will take a hell of a lot more. I still feel like I'll repay the favour (in the) second round."

The Dubliner admits that he has taken his preparation for the rematch much more seriously, splashing out €300,000 on his camp for UFC 202, and he think that vengeance is on the horizon for him.

"It's a challenge I have," McGregor said. "He's a big, slow Mexican beanbag. But I'm gonna take another stab at it. Second round. Mystic Mac!"