Not exactly best friends, but there is a definite fondness.

Urijah Faber has worked closely with Conor McGregor over the past six weeks and managed to get under the Irishman's skin about six thousand times.

So far, TV cameras have caught the pair grappling at the UFC 189 weigh-in and Faber revealed there was another coming together at the The Ultimate Fighter gym.

END_OF_DOCUMENT_TOKEN_TO_BE_REPLACED

The California Kid, who coaches Team America against McGregor's Team Europe at TUF 22, shed some light on his burgeoning relationship with the UFC Featherweight champion, but couldn't resist having a pop at the Dubliner over his wrestling skills in the fight against Faber's team-mate Chad Mendes in July.

Faber told Submission Radio, 'Conor and I have a funny relationship.

'We like to talk crap to each other but I actually think he’s a decent dude. As a competitor, I think he’s a guy that likes to win so it makes for a good competition. I was pretty pumped about it.

'We’ve had it on a couple of occasions where we start talking and start into a physical confrontation. We’re both fighters and when personal space gets invaded… but we never really cross the line. Tempers never flare too bad.'

Faber added, 'Conor can take a joke, I can dish it out and take a joke as well, so there’s a lot of banter back and forth, and hopefully down the line some sort of fight between us.' 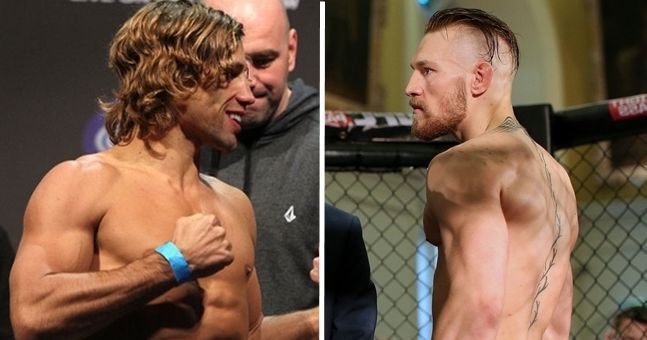 END_OF_DOCUMENT_TOKEN_TO_BE_REPLACED

The 36-year-old's last UFC fight was a loss to Frankie Edgar and, though he is not expecting to fight him this year, he feels he would have McGregor's number.

He reasoned, 'I’m a very durable guy but I have, I think, the most submissions in Pride, UFC and WEC history, so that’s one of the things that would sell that.

END_OF_DOCUMENT_TOKEN_TO_BE_REPLACED

'That’s one of the things that Conor, from what I’ve seen and from his past, his two losses are from submissions. You saw the way Chad [Mendes] was able to handle him on the ground [at UFC 189]. So, for me, it’s a good match-up.

'It would be a dangerous fight, of course, but for both of us. I’m confident I could submit him and I’m sure he feels like he could knock me out.'

Ever the playful scamp, Faber got in another dig about McGregor being lucky to face an under-prepared Mendes when he won his interim strap.

'As much as Conor is in denial about it,' he declared, 'his grappling was exposed a little bit [against Mendes].

'He’s a big strong guy for the weight class, he knows how to stay in it, he knows how to capitalise, but our guy Chad rolled off the couch and basically had his way with him on the ground.'

'Chad was on a hunting trip,' he added. 'They pulled him out of the brush to fight for the world championship.'


popular
"I've never seen anything like it" - Pitiful Manchester United reach new low at Brentford
Gary Neville highlights Erik ten Hag decision that 'backfired spectacularly' at Brentford
"He can add something to our attacking line up" - Jamie Clarke signs for Northern Irish soccer club
Barcelona allowed to register four new signings, but Jules Kounde misses out
Ranking the best county GAA songs of all-time (32-1)
"I’ve never heard someone say something as stupid” - Katie Taylor blasts Jake Paul's rematch comments
Erling Haaland registers strange statistic on home debut as Mark Travers keeps the City score down
You may also like
1 month ago
Jorge Masvidal speaks about defending BMF title against Conor McGregor
2 months ago
Dana White reveals who Conor McGregor could fight on UFC return
2 months ago
Your guide to a great weekend of sport and how to stream it all
2 months ago
Conor McGregor says he knows his next UFC opponent and fight date
3 months ago
Commentating cage-side, Daniel Cormier missed the UFC knock-out of the year
3 months ago
Conor McGregor responds to Michael Chandler's callout after UFC 274
Next Page