As expected, Colby Covington has repeated his incredibly evil troll

Interim UFC welterweight title challenger Colby Covington has only one goal on social media - to piss people off. More often than not, he succeeds too.

Irish fans may remember the time he vowed to bury Cathal Pendred 'like the British buried the Irish.' That rubbed a lot of folks the wrong way. As did labeling Brazil a 'dump' and calling its citizens 'filthy animals' after beating Demian Maia in Brazil. His reward for those comments was exiting the stadium under a shower of boos and projectiles and ultimately, a boomerang to the dome thrown by Fabricio Werdum in Australia (You couldn't make it up!)

END_OF_DOCUMENT_TOKEN_TO_BE_REPLACED

Perhaps his greatest ever troll was spoiling the highly-anticipated release Star Wars: The Last Jedi. The tweet was genius for a lot of reasons. Firstly, the opening three words were the spoiler, so by the time you realised it was ruined, you were already into the insults portion of the post. Secondly, he sent it on the opening night of the movie, using both of its official hashtags to maximise the damage. And his final 'fuck you' to his 'virgin haters' was pinning it to top of his profile.

It was evil, but sweet Lucifer it was genius!

END_OF_DOCUMENT_TOKEN_TO_BE_REPLACED

Covington's been at the spoiling malarky again. If you're an MMA fan who enjoys cinema, you will have seen this one coming from a mile away.

Another beloved movie franchise just released a new instalment and as expected, Covington has stayed true to his gimmick by ruining it for everyone. His spoiler for Avengers: Infinity Wars is less subtle, but his hashtag game is on point again. As well as including three relevant hashtags f0r the movie, he also used the one for the massively popular NFL Draft.

Cleverly, he also included the hashtag for UFC 225, where he will provide the co-main event. He takes on former lightweight king Rafael dos Anjos for the interim welterweight title in Chicago. 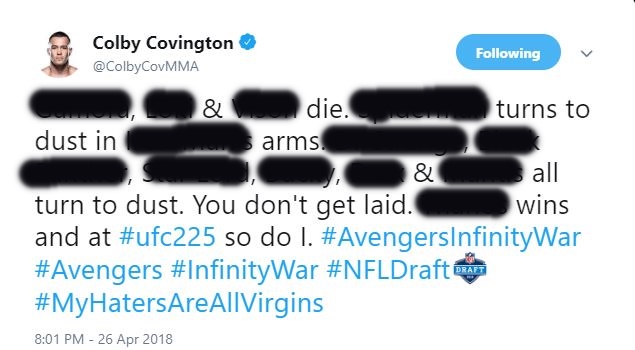 
popular
Kilmacud Crokes to counter Glen's objection over extra players in All-Ireland final
"He's a serious specimen, 6 ft 3 as well, so he's an incredible athlete" - Geaney hails O'Connor's impact
"It's very clear how I felt about it. I had a very definite view on it" - McEntee on Dunboyne's 2005 semi-final saga
Roy Keane on Man United's two most improved players since Ronaldo left
January transfer window 2023: Follow the latest updates live in our hub
"He didn't give me that jersey back!" - Johnny Sexton on new rival Jack Crowley
Roy Keane's threat to Cesc Fabregas about 'pizza incident' has panel in stitches
You may also like
1 month ago
Ariel Helwani shares Paddy Pimblett WhatsApp messages as spat becomes public
1 month ago
Conor McGregor savagely hits back at Joe Rogan following PED comments
2 months ago
"There’s a new Irish superstar in town" - Young Derry fighter touted for UFC after big title win
2 months ago
Conor McGregor almost unrecognisable after shaving off iconic beard
3 months ago
Dana White confirms Conor McGregor is not in the USADA testing pool
4 months ago
Hasbulla signs five year deal with UFC 'worth more than many fighters'
Next Page