Mzwandile Hlongwa is far from a household name in mixed martial arts but he's enjoying some new-found mainstream appreciation for his knockout victory this weekend.

Hlongwa's opponent Torbjorn Madsen literally didn't know what hit him just over a minute into the pair's fight on the EFC 75 card on Saturday night as he was out cold before he hit the mat thanks to a thudding spinning back elbow out of nowhere.

So many one-two combinations are used as range-finders in striking but there was nothing tentative about Hlongwa's as he used it to spin and render Madsen unconscious while still standing.

Hlongwa even managed to land a couple of clean shots as Madsen fell to his back but the referee thankfully saved the Norwegian fighter from even worse punishment.

The South African middleweight will likely never hit another opponent as cleanly as he did this weekend and he's clearly become rather fond of a knockout, having finished each of his last three opponents. 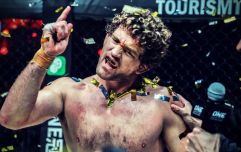 Ben Askren on getting the opportunity of a life-time... after he retired

END_OF_DOCUMENT_TOKEN_TO_BE_REPLACED

Madsen was 5-0 going into Saturday night but he will never forget his first career defeat as it is bound to feature on MMA highlight reels for years to come.

If you see a better knockout this year, consider yourself lucky because this is absolutely devastating.