John Kavanagh has dubbed it "the biggest fight in Irish MMA history".

Two fighters from two of the biggest gyms in Irish MMA collide in the co-main event of this weekend's Bellator 217 at the 3Arena. Straight Blast Gym Ireland's Peter Queally will take on Team Ryano's Myles Price in a 155lbs bout which has bad blood written all over it.

There are a few firsts here. Both fighters will be making their Bellator debuts as they were signed during the influx of 16 Irish fighters brought into the worlds second largest MMA promotion in the summer. It will also be the first time that two Irish mixed martial artists will go head-to-head in the co-main on a global level of the sport, making it a domestic fight for the ages. SBG vs. Team Ryano on the international stage - a dream come true for Irish combat sports fans.

END_OF_DOCUMENT_TOKEN_TO_BE_REPLACED

If you have been living under a rock and are oblivious to the mise en scène of this feud, it goes all the way back to September 2018 prior to UFC 229 when Conor McGregor was due to fight Khabib Nurmagomedov. Price, formerly of SBG and then-regular sparring partner of 'The Notorious', travelled over to San Jose, California to train with the American Kickboxing Academy (Nurmagomedov's gym) at what some might describe as a curious time.

It was his appearance on the Eurobash podcast with Peter Carroll that gave prominence to this, giving detail to many unanswered questions such as why Price left SBG to join Team Ryano, his thoughts on McGregor and how he believed the fight would go. The Kilkenny native even went as far as to brand the Dubliner 'narcissistic', which didn't sit well with the entire SBG roster, along with a portion of Irish MMA fans, who credit McGregor with putting the country on the MMA map. Some believe that without the Crumlin man, there wouldn't be the platform there is today giving other Irish fighters the opportunity to progress with a career in the sport.

END_OF_DOCUMENT_TOKEN_TO_BE_REPLACED

If that wasn't enough to build a wedge between himself and the entire SBG gym, 'Splinter' proceeded to call out McGregor's long-time training partner Peter Queally, believing that it would be a match-up that would make a lot of sense since both men had been signed by Bellator. His wishes were granted when the promotion announced they were coming back to Dublin for the third time. Once officially announced, Queally didn't hold back with the trash talking. 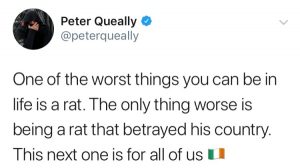 Born and bred in Dungarvan, Co. Waterford, Queally (11-4-1) turned professional back in 2012 has since become one of Ireland's best travelled martial artists, having fought in many countries across the globe such as Italy, Poland, Russia, Kazakhstan and even South Africa.

END_OF_DOCUMENT_TOKEN_TO_BE_REPLACED

The grappling expert is coming off the back of his first KO victory of his career and will be hoping to keep that momentum going in the co-main event of Bellator Dublin. Having gone over four hours without ever being finished in a mixed martial arts contest, 'The Showstopper' has only ever tasted defeat by way of decision, having never been knocked out or submitted in his professional career thus far. Maintaining this record will be the perfect belated birthday present for Queally, who had the unfortunate timing of having his birthday on Tuesday of fight week. SportsJOE had the opportunity to ask Queally about the fued, asking the Dungarvan native if the animosity was real and if Saturday night put an end to the bad blood. "Yeah, there is, he's done what he's done, there is hard feelings. You can't change that, I don't know what's going to happen".

"I, of course, respect that he's getting in to fight me, he's backing up what he said he was going to do, I can't hate him for that, so there is a certain respect there but what will happen afterwards, I can't tell you, you know, there's a lot of animosity there,it's a personal thing he's done and we will see what happens."

On how he saw the fight going, Queally told SportsJOE, "I think it's going to be a scrap that I'm going to get the better of the exchanges in and he's going to come out a hurt man after it but I think it will be a good fight. A very good fight".

Myles Price (10-7), on the other hand, will be entering the Bellator cage this weekend off the back of a unanimous decision loss to UFC veteran, Norman Parke, under the Brave CF promotion. Since the whole AKA debacle took place, 'Splinter' has seemed to have attempted to row back on his apparent animosity towards his former gym. His sole purpose for training at the San Jose gym was, apparently, all about improving his wrestling/grappling skills and not to help out Team Khabib, he told KO! in an interview at the beginning of the year. Talking to SportsJOE, 'Splinter' talked about the benefits of improving his wrestling skills at AKA but refuses to get carried away just yet.

"Yeah, yeah, the wrestling has come on a lot now,I have to say. I feel,like,in my previous interviews as well that I've mentioned this, that I'm not going to become a NCAA wrestler within three months but I'm certainly going to add wrestling that compliments to my game a lot more and I'm a lot more better at dealing with high level wrestlers, so, you know, that comes with the territory with going over to such a high level camp over in AKA, so it was great."

Although he is very confident about his chances of winning at Bellator Dublin, he seems to have zero interest in becoming involved in the social media war-of-words his opponent has been trying to engage in. The stigma surrounding the fight hasn't effected his preparation for this all-Irish clash, he claims.

"None whatsoever because at the end of the day it's a job I've to do in the cage for three fives and, like, I just gave my honest opinion, like, about the situation and of course the media is going to twist it here and there as to what it actually was. But the pure interview, it was honest."

Price isn't delusional, in the sense that some people were offended by the, now-infamous, interview.

"Some people are going to find that they were going to get upset it by it which is expected as well, you know, and it's only added to the fight but the way I see it is, that I don't take anything personally, if I give my honest opinion and like, that's just the way it is. If you do then that's not my problem."

Those familiar with the domestic scene will remember Price from his early days on the regional circuit and will perhaps best remember his rear naked choke victory over SBG's Kieran Davern back in 2013 on a Battlezone FC card. There wasn't as much hostility as there is now between the Kilkenny man and SBG Ireland and he was actually pretty respectful back then whenever asked about his switch to Team Ryano.

Speaking with SportsJOE earlier this week, SBG Ireland's head coach John Kavanagh remained diplomatic on the subject of Price, simply saying: "He did train here for awhile and I found him OK. He actually lived with me for awhile!" before switching the conversation to his current charge, Queally. 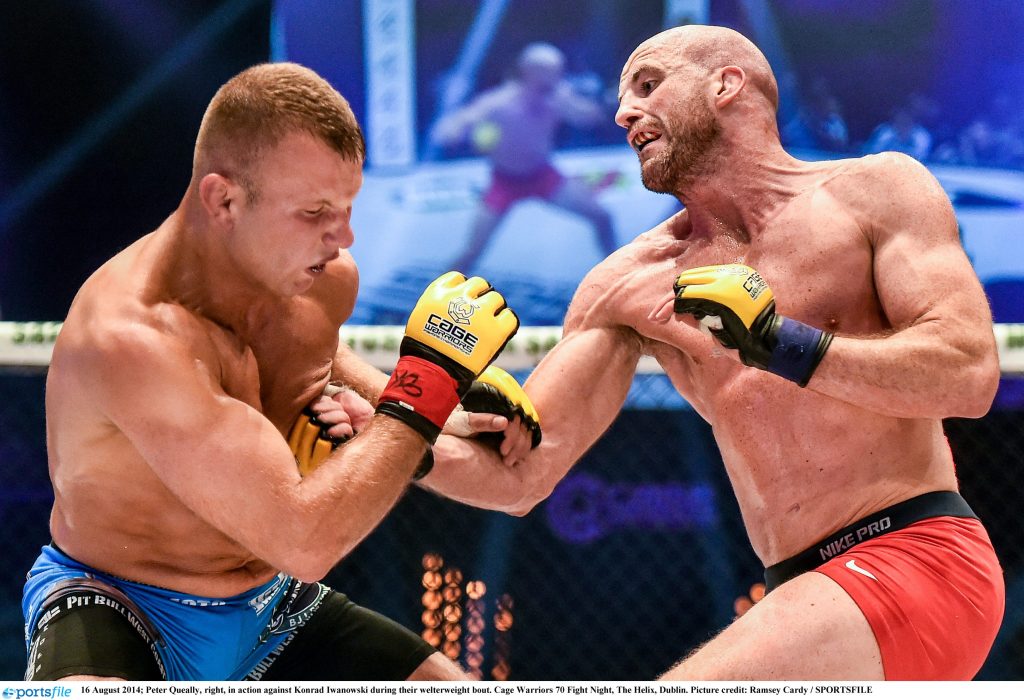 Kavanagh continued: "What I'm most excited about is that Peter Queally, who has kind of travelled to all these parts of Russia, taking on these incredibly tough fights, to now have the chance to do this back in Dublin. He's got a huge following, especially in Waterford, where he's from.

"He's a great athlete, a great fighter and for him to get the chance to fight in what I think is the biggest Irish MMA fight in history, between two Irish guys that are at a really high level at an almost sold-out arena on Sky Sports. It doesn't get better than that."

James Gallagher, who is set to headline Bellator Dublin against Steven Graham and was also present for the interview, wasn't as delicate with his take on Price, labelling his former gym-mate an "absolute twat."

'The Strabanimal' went on to say: "Whatever he did was all good but he just should have did what he did and kept his mouth shut."

How will Price react to standing opposite his former coach and stablemates? Will he succumb to the pressure and the stigma surrounding his Bellator debut? Will Queally's rage derail his game plan or will he stay cool, calm and collected as he did against his most recent opponent, who had the advantage of fighting on home soil? Which Irish club will prevail?

One thing is for sure that a lot of questions will be answered this Saturday. But the real question is, will it put an end to this Irish civil war, or will it just be the beginning?


popular
Ballyhale's Colin Fennelly felt Ballygunner's victory speech was disrespectful
Eniola Aluko responds to criticism after on-air mistake on ITV
Brazil star responds after Roy Keane slates dancing celebrations
Roy Keane reacts to Brazil's jubilant celebrations in first half demolition job
Rory McIlroy explains 'falling out' with Shane Lowry that lasted a few years
Samuel Eto'o involved in an ugly confrontation with fan outside World Cup match
World Cup 2022 Day 16: All the major action and talking points
You may also like
2 years ago
"When you grow up in these places, if you can't fight you're f***ed" - James Gallagher
3 years ago
James Haskell responds to MMA call-outs by Neil Best and Andy Powell
3 years ago
James Gallagher set to headline Bellator show in Dublin
3 years ago
'I really think that me and Ben Askren are gonna fight' - Dillon Danis
3 years ago
'Bellator has a Dublin show in September so I'm thinking of bothering them about it' - Heather Hardy
3 years ago
'Katie's an Olympic gold medallist who unified the belts but is not getting paid like a man'
Next Page