"Two of the best strikers in this sport - me and McGregor. That's amazing."

The challenge was thrown out there by Conor McGregor on Monday.

END_OF_DOCUMENT_TOKEN_TO_BE_REPLACED

The Brazilian 'Spider' versus the Irish 'Gorilla'. Where McGregor is concerned, anything is possible.

Having already claimed the UFC's featherweight and lightweight belts in two stellar performances, against José Aldo and Eddie Alvarez, McGregor is now on the make for bouts that interest and excite him. He is determined to seal out that Nate Diaz trilogy and had lined up a shot at the interim welterweight title, in May, before the Barclays Center bus attack nixed that.

On Saturday he fights Khabib Nurmagomedov for a lightweight title he still carries the belt for despite being stripped of it back in April. Following that contest, at UFC 229, he will remain the biggest draw in Mixed Martial Arts, win or lose.

On the Ariel Helwani MMA Show, earlier this week, McGregor spoke about future fights in boxing and the UFC before pausing at the former middleweight champion.

"I'd be interested in an Anderson Silva bout, I swear to God. Anderson is a legend of the game. I'm sure he's hunting for a few quid, as well."

END_OF_DOCUMENT_TOKEN_TO_BE_REPLACED

It was only a matter of time before the 43-year-old raised his head above the parapet. Silva, who held the 185lbs belt between 2006 and 2013, told ESPN that a fight against 'The Notorious' would be 'a dream come true'.

Asked if he was surprised to hear his name mentioned by McGregor, he replied:

"No, he's a legend. I'm a legend. Let's go do this for the fans. Hopefully McGregor doesn't do the same as Georges St-Pierre. He talked about fighting me and then he run and run and run." 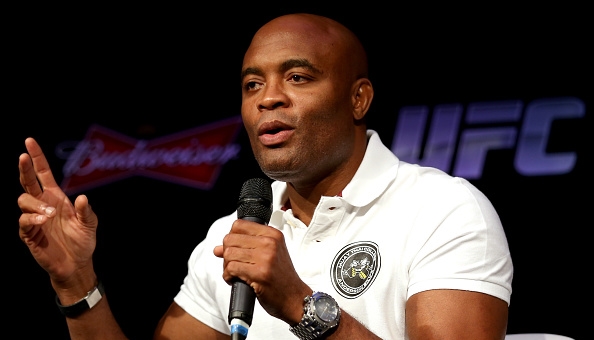 END_OF_DOCUMENT_TOKEN_TO_BE_REPLACED

St-Pierre long talked about a fight against Silva, too, but it never materialised. The Brazilian joked that McGregor could do with the money from a super-fight too especially 'when you're buying castles and private jets and doing something crazy and need lawyers'.

The one condition Silva (34-8) laid out is with regard to his weight for any potential fight. "I believe 180 is perfect," he said. "I'm ready for that."

Pressed on that, Silva said 180lbs would be the lowest he could go. McGregor has fought at welterweight, twice, but going higher than take would take some adjustment. If this fight happens, Silva would have fought a UFC heavyweight champion (Daniel Cormier) and featherweight champion (McGregor) within a short space of time. He lost to Cormier at UFC 200 in July 2016.

He was not drawn into a specific prediction for this Saturday's fight at UFC 229 but remarked that McGregor will have no need to destroy buses carrying him if their fight gets the green light.


popular
Cristiano Ronaldo 'agrees £173m-a-year deal' with Saudi club
"Nowadays, even if I don't hit a ball, I don't care as long as we win" - Gleeson learning from the past
Thibaut Courtois warns teammates after leaks emerge from Belgium camp
Argentina reach World Cup last-16 with convincing win over Poland
World Cup 2022 Day 11: All the major action and talking points
Damien Duff makes 'brutally honest' England World Cup prediction after Wales win
The FootballJOE Qatar World Cup 2022 Geography Quiz
You may also like
2 months ago
Hasbulla signs five year deal with UFC 'worth more than many fighters'
2 months ago
UFC fighter Elias Theodorou has died, aged just 34
2 months ago
John Kavanagh and Johnny Walker kicked out of T-Mobile Arena during UFC 279 main card
2 months ago
Conor McGregor took exception to one part of Nate Diaz victory speech
2 months ago
Nate Diaz and Tony Ferguson tossed together for UFC 279 main event after wild 24 hours
3 months ago
Your guide to a huge weekend of sport and how to watch it all
Next Page