Thanks for the memories, Michael Bisping.

Michael Bisping's UFC career spanned 29 fights over 14 years. So trying to fit every single highlight into one piece would be an impossible task.

With that in mind, we've narrowed it down to 21 moments that we feel sum up the good side of 'The Count'. Legacy-building achievements, times of raw humanity and of, course, the shit talking - this article doesn't have it all, but you might find some gems that you may have missed throughout the years.

END_OF_DOCUMENT_TOKEN_TO_BE_REPLACED

What better place to begin than the start? After demolishing everyone he faced on the show, Bisping took on Josh Haynes in the Ultimate Fighter 3 Finale.

Although he didn't win over many new fans with his cocky demeanour in the competition, it didn't matter in the end. Bisping scored a second-round TKO to become the first ever British TUF winner. The victory earned him a six-figure contract, which turned out to be the first of many deals he signed with the UFC. 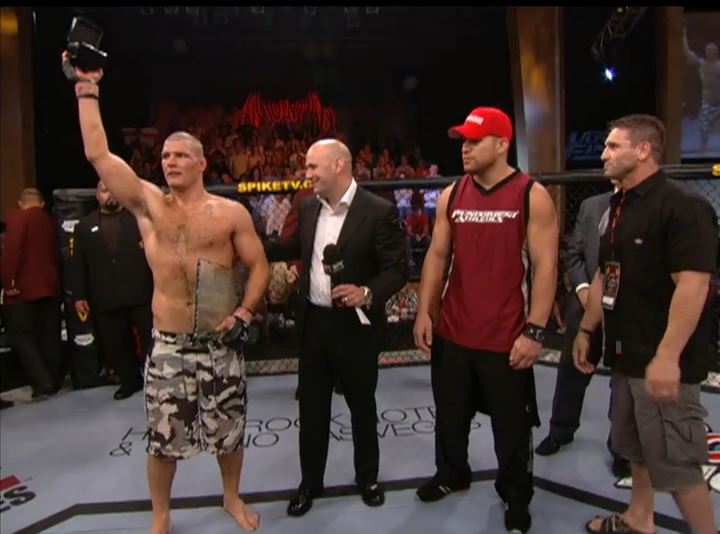 That time he couldn't even take a piss in peace

Skipping forward all the way to UFC 205 where Bisping was fresh off his first title defence. He learned the price of fame that night, not being able to go for a slash without being hounded by chanting fans.

I kept it above the belt @bisping pic.twitter.com/nSR4AqqElq

When Rashad Evans scared the holy bejaysus out of him

Oldest trick in the book.

Confronting the Soldier of God

END_OF_DOCUMENT_TOKEN_TO_BE_REPLACED

Yoel Romero was arguably at his most terrifying the night he split Chris Weidman's head in two with a devastating flying knee. After the victory, he did his patented march celebration around the Octagon and called out the champion in the crowd.

Bisping didn't have a mic, but he didn't need one. He somehow managed to hold his own in the back-and-forth with a series of one-fingered salutes, a couple of thumbs down and pretending to inject some imaginary PEDS into his arse.

Romero had all of a sudden started killing it on social media. Considering he's middle-aged and doesn't have the best grasp of the English language, Bisping was sceptical. Unsure whether he was talking to some social media intern or the real Romero, he told his rival that if he wanted to say something, he needed to call into his radio show on Sirius XM.

@MMAonSiriusXM hey Yoel, I'm not gonna argue with your social media intern.But if you wanna talk call in 8447967874 #fake

Romero responded by saying he was waiting on hold and then, remarkably, he was appearing on the show as a guest.

A lot of bleeped expletives ensued.

Not even a tear

Ahead of his first title defence, Bisping ran into a couple of his fans who had made the journey to his hotel on the off chance they might meet him. The champ went one step further by gifting them a pair of tickets to the event.

It was an incredibly sound gesture, but boxing coach Jason Parillo sounded a little bit let down by the reaction of the supporters.

Bisping returned to the Ultimate Fighter as a coach for the 14th season of the show. He got a little too excited celebrating beating adversary Jason Miller in the coaches' challenge and ended up taking an embarrassing tumble.

Several years later, Bisping showed that he learned from that experience as a TUF coach.

When he told a Twitter troll where to go

What did he honestly expect him to say?

Breaking down a truly awful fight

During a rare lull in UFC action, Bisping was forced to look towards the world of motorsport to get his combat sports fix.

Sure, Anderson Silva's career was in a bit of a tailspin, but Bisping wasn't exactly a spring chicken when he fought 'the Spider'. Beating arguably the greatest fighter ever in the UK after nearly being knocked out earlier in the fight seemed like something out of a fairytale.

Little did he know, the best was yet to come.

Bisping walked off a movie set to take on Luke Rockhold on two weeks' notice for the middleweight strap. Nine years after making his promotional debut, he finally secured the big one.

The problem was he had no time to prepare and Rockhold had beaten him recently enough via submission. To those people who weren't giving him a hope in hell, he issued one hell of a response on the Luke Thomas Show.

"Listen, I'll put it like this. If people can walk around - and I don't mean this in a disrespectful way to religious people - and you believe the son of God came down to earth 2,000 years ago, and he killed himself for our sins, and he can walk on water, and there's a God up there looking after ourselves, and if you get on your knees and pray to him that things will change, if you can believe that, then you can believe that I can knock the fuck out of Luke Rockhold two weeks from Saturday."

A quote so famous he uses it as the intro to his Believe You Me podcast. When Rockhold did his best Dr Seuss impression, Bisping ripped the piss out of him.

World title wins don't come much cleaner than a first0round knockout. At that moment in time, Bisping was the king of the world.

🏆 Knocks out Rockhold for middleweight title

Unsurprisingly, Bisping didn't change his attitude too much after flooring Rockhold. He arrived fashionably late to the presser with a huge grin washed across his face, a beer in hand and the belt around his shoulder. Rockhold looked like he had woken up in a living nightmare.

To be fair, he kind of did as Bisping seized every available opportunity to rub the result in his face.

Bisping never had to go looking for ammo off Rockhold.

Bisping's victory speech after the controversial booking against the retiring Dan Henderson was absolutely masterful. At the time, all the top contenders were dying to fight him, but there was no clear-cut number one contender.

After paying his respects to Hendo, he immediately went into promo mode and told the chasing pack exactly what they needed to do to earn a shot at his belt.

This response to all the haters

Arguably the greatest put-down since the dawn of the internet.

It was the first chance to sell the biggest fight of his career and Bisping turned up late and scuttered. Fortunately, when he arrived, he put his acerbic tongue to use to get the fans going.

UFC 217 was one of the greatest events in UFC history. All three belts changed hands in the marquee bouts. However, as all the new champions celebrated, the former ones were left licking their wounds.

There was a lovely moment between Bisping and Cody Garbrandt backstage that was caught on camera. Both of whom lost their respective titles that night. At the end of Garbrandt's interview with Megan Olivi, Bisping stepped in to offer 'No Love' some supportive words.

If you thought there was no way to make that Rockhold KO any better, you'd be dead wrong. Bisping's description of the finish at the UFC London fan Q & A in 2018 added a new layer to the fight-ending sequence.

Michael Bisping's description of knocking out Luke Rockhold was something else pic.twitter.com/GgX7IoWebo


popular
The most Stone Age tackle you've ever seen gets South African lock straight red card
Galway fans' frosty reception for Davy Fitz doesn't make any sense
"Johnno went, 'We’re not moving! You're trying to mess us about!'" - Ben Kay recalls red carpet controversy
Ryan Manning hacked to the ground by Henri Lansbury in ruthless assault
"Some of the generals wanted me executed" - Irish rugby legend on flag caper that went wrong
Neil McGee hasn't worked in eight weeks after back injury but still won't rule out championship return
'Brian was a genius... he would've killed you to even win a game of touch'