The horse they all forgot about was Minella Indo. A perennial nearly horse, Henry De Bromhead's eight year-old has proven himself as the real deal now.

Having fell over Christmas and then disappointed at the Dublin Racing Festival in February, the horse avoided the radar coming into the biggest race of all but on Gold Cup Day, he delivered on the potential everyone knew was there to seal an immortal treble for De Bromhead, who Following on from his wins with Honeysuckle and Put the Kettle On, became the first handler ever to take the three championship races. 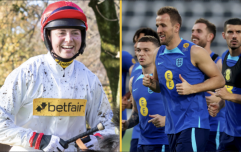 END_OF_DOCUMENT_TOKEN_TO_BE_REPLACED

Rachael Blackmore has undoubtedly been the star of the show, romping to the jockey's championship with six emphatic wins but this was Jack Kennedy's moment in the sun.

The Dingle rider has long been touted as one of the most talented in the weigh-room but injuries haven't spared him. They haven't broken him either and in between the setbacks and falls, he's never failed to impress. This was his best day of all, however, storming up the Cheltenham hill to take the game's biggest prize.

Afterwards, Kennedy's true passion and grá for the game were clear for all to see as the normally reserved character lived his childhood dream.

"This is what I've dreamt of since I was a child. This is what I live for. I just can't believe this is after happening."

"This is what I've dreamt of since I was a child.

"This is what I live for. I just can't believe this is after happening."pic.twitter.com/9PL6eOILhd

That's why he got into the game. That's what it's all about.

You may also like
1 year ago
The moment it dawned on Willie Mullins that Ruby was finished and things would never be the same
1 year ago
"She's so professional. She'll know everything about every horse and every jockey riding in that race"
1 year ago
The SportsJOE 12 o'clock quiz | Day 330
1 year ago
Great things have come to the man who waited
1 year ago
"She's an incredible person" - Ruby chokes back the tears after Blackmore's crowning glory
1 year ago
"I was just looking forward to having a spin in it" - 150/1 shot lands the Irish National
Next Page