WATCH: The Players Championship saw two Shot of the Year contenders in the space of 20 minutes

On the day that 21-year-old Si Woo Kim announced himself to the golfing world, he was nearly upstaged by two spectacular shots in the closing holes of TPC Sawgrass.

The fairytale story of the weekend was that of Ian Poulter, he found himself in contention for the 'unofficial fifth major', it was only three weeks ago that the Englishman thought that he would be without a PGA Tour card.

After a bit of a fiasco to do with medical exemptions, it seemed Poulter wouldn't have a tour card for the remainder of the year but, thankfully for him, the situation was cleared up and he bought himself some time.

END_OF_DOCUMENT_TOKEN_TO_BE_REPLACED

That meant that he was still eligible to play at Sawgrass and despite a torrid run of form he found himself in second place walking down the 18th fairway, to the surprise of many.

At this point. Si Woo Kim was nearly guaranteed tournament victory, holding a two-shot lead over Poulter and the nail was in the coffin when the 41-year-old hit a dreaded shank and was forced to drop after the ball ended up in an unplayable lie, finishing up in a palm tree.

With about $500,000 at stake, Poulter would need to hit the green and make the putt to secure a second place finish alongside Louis Oosthuizen.

And he did just that with this spectacular shot.

From way right to extremely tight.

The ups and downs of golf for @IanJamesPoulter.

Just before that, Rafa Cabrera-Bello shot up the leaderboard after being the first man in over 15,000 attempts to hit an albatross (not a double eagle) on the par 5 16th. 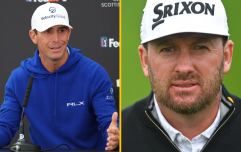 END_OF_DOCUMENT_TOKEN_TO_BE_REPLACED

It was only the third ever albatross in tournament history, and he needed a very lucky bounce to find its way to the hole.

Cabrera-Bello then went on to birdie the infamous 17th hole but any slim chance of victory slipped away on the 18th as his ball suffered the same faith as this poor bird, ending up in the water.

Cabrera-Bello still took home a cool $462,000 for his efforts so he'll probably be okay.