VIDEO: A very relaxed Irish amateur is right in the mix at The Open

Follow the action from St Andrews in our liveblog

Whatever Paul Dunne had for breakfast, or whatever lucky pants he wore today on the opening day of the third major of 2015 then we'd advise him to repeat it all tomorrow.

The Wicklow man enjoyed one of those rare days when he could hardly do any wrong on the golf course at St Andrews on day one of the British Open.

We wouldn't have been surprised if some people mistook him for Jordan Spieth, after he shot a four under in the back nine before dropping just one more shot before the 18th. 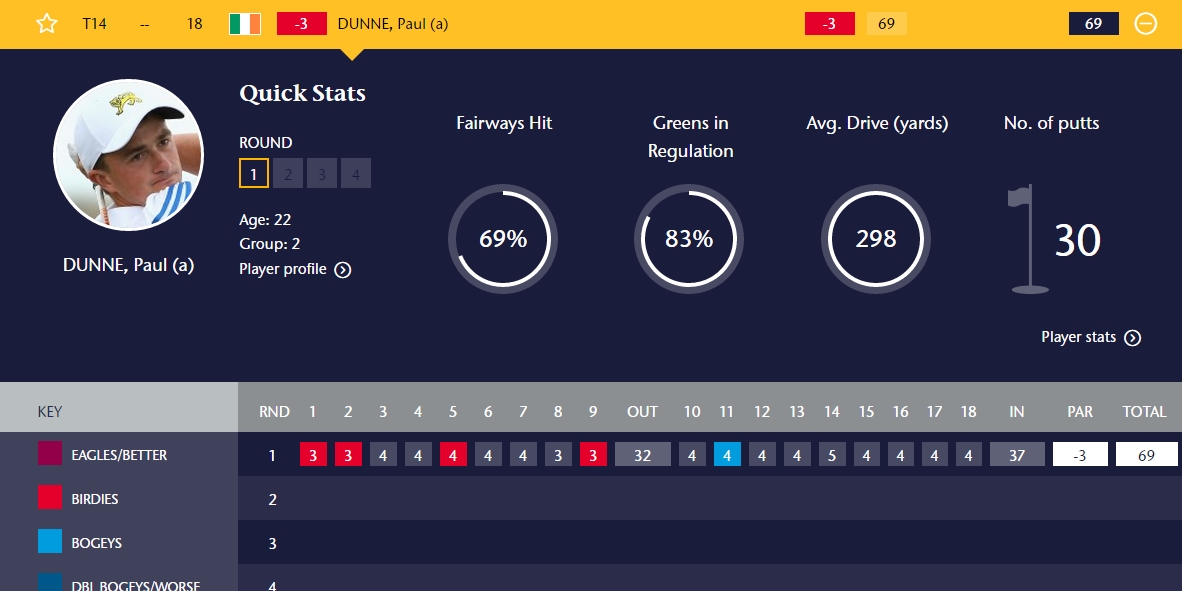 END_OF_DOCUMENT_TOKEN_TO_BE_REPLACED

The Greystones man is just playing in his second ever Open, and first at St Andrews, and after the opening round he's put himself in a brilliant position to challenge over the next few days.

At the time of writing he's on three under after a first-round 69, and is three off the current clubhouse leader David Streb on course at 6 under.

Speaking on the BBC afterwards the Wicklow man was very relaxed.


popular
"Johnno went, 'We’re not moving! You're trying to mess us about!'" - Ben Kay recalls red carpet controversy
"Some of the generals wanted me executed" - Irish rugby legend on flag caper that went wrong
Tommy Fury spotted having the time of his life at student night out
Garry Ringrose challenges "pretty ridiculous" changing conditions for women's players
No Simon Zebo or John Cooney as Ireland gather 50 players for one-day camp
GAA make retrospective decisions on John Small and James McCarthy incidents
Neil McGee hasn't worked in eight weeks after back injury but still won't rule out championship return
You may also like
2 years ago
Harrington recalls tale of Mickelson's five-figure tab that he had to pay
2 years ago
Jordan Spieth and Rickie Fowler back Open return to Portrush
2 years ago
"There is no coming back for Rory McIlroy"
2 years ago
'Little fat kid with the glasses' and one of golf's best predictions
2 years ago
Brooks Koepka hits out at playing partner J.B Holmes for tortuously slow play
2 years ago
Shane Lowry guaranteed for Ryder Cup despite frustrating points rule
Next Page