The US Masters begins on Thursday but the festivities have been going on since Monday.

Practice rounds and par three tournaments, generally, ensure that Augusta National is a hive of activity for this holiest of April weeks. Amongst golfing royalty, there is no congregation as holy as the Champions dinner which, in its realm of exclusivity, takes place each Masters Tuesday.

There was almost a sombre tone to the usually joyous celebration this time around, with the golfing greats paying homage to their sidelined colleague Tiger Woods. Past champs told stories and relived memories about one of the greatest ever to pick up a club, with a chair left vacant in his honour, as he recovers from injuries sustained from his Los Angeles car accident of last month.

98-year-old Jackie Burke Jr. was another past champ who didn't make it to the table, missing out on the pigs in blankets and fillet steak served up during Dustin Johnson's celebration, but another more recent champ was much more conspicuous in his absence and didn't receive anywhere near the same adulation.

Instead of basking in the glories of past triumphs, Argentina's two-time major champ Angel Cabrera spent the day in his prison cell in Brazil. It was earlier this year when the 2009 winner was arrested, with a total of three ex-partner's having alleged charges of domestic abuse against him. One of the charges, filed by Cecilia Torres Mana, contains the allegation that Cabrera had tried to run her over with a car. 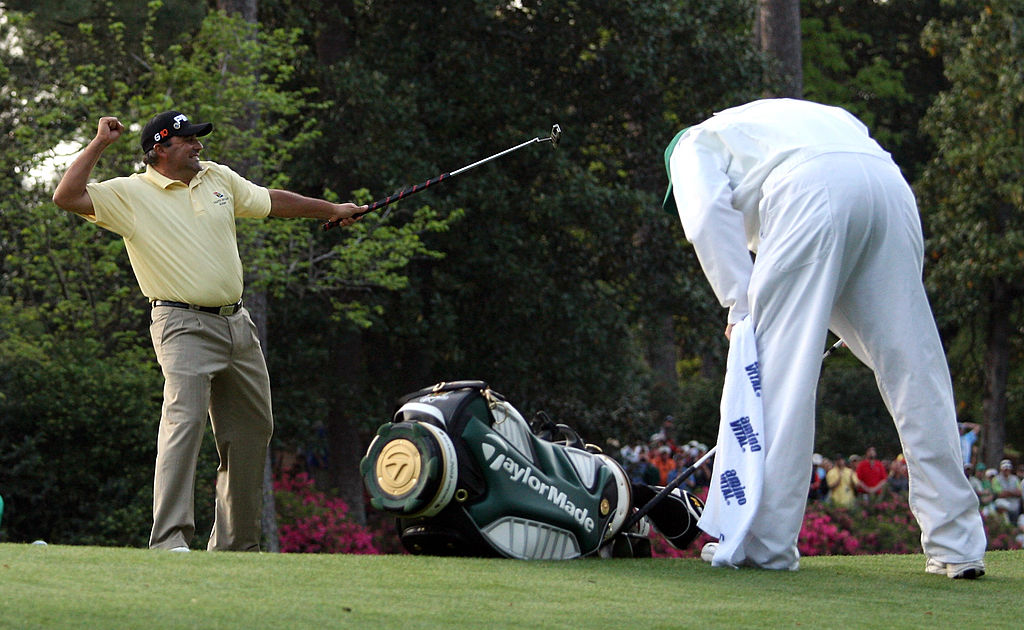 END_OF_DOCUMENT_TOKEN_TO_BE_REPLACED

The 51-year-old's trial was ongoing when, as opposed to its conditions, Cabrera travelled abroad with the intention of playing in the Senior Players Championship in Akron, Ohio. Interpol soon issued an alert and Cabrera has been in prison since, the resumption of his trial pending.

It certainly marks a huge fall from grace for a once iconic player, who with his seemingly laid back demeanour and grip-it-and-rip-it style, became a fan-favourite in the golfing fraternity. His 2007 US Open triumph and 2009 Augusta win certainly seem a long time ago now, as Cabrera prepares for a life far removed from his sporting glories.

Staying in Georgia, the famous tournament begins this evening with Jordan Spieth, Justin Thomas and Rory McIlroy among those vying to take the green jacket off Dustin Johnson's back. From an Irish perspective, Shane Lowry has also been rounding into a bit of form recently with the Offaly man hoping for a good showing at a tournament he has struggled at in the past.

Bring on one of the most eagerly anticipated weeks in sport.

popular
Southgate explains why he didn't move drinks bottles like Ronaldo and Pogba
Cristiano Ronaldo is not human. Not human at all
Rio Ferdinand responds to fans calling him out on terrible Scotland prediction
QUIZ: Name these 50 Euro Championship goalscorers
ITV revisit Highbury tunnel incident, but viewers feel Keane asked wrong question
"Not good enough" - Roy Keane rips England a new one as Scotland keep hopes alive
Ronnie Whelan criticised for his commentary of 10th minute stoppage for Christian Eriksen
You may also like
2 months ago
Rory McIlroy hits father with wayward shot, on way to opening 76
2 months ago
How a trip to Tiger Woods' trophy room taught Rory McIlroy what's what
7 months ago
Bryson DeChambeau hits drive so hard that it disappears into the ground
8 months ago
"My job at Sky is not to be a cheerleader for Rory McIlroy" - Paul McGinley
2 years ago
Tiger Woods completes one of greatest ever sporting comebacks winning US Masters 14 years on
2 years ago
Phil Mickelson's pre-round prediction is about as ballsy as they come
Next Page