Unsurprisingly, Woods has not been as forthcoming this year.

Tiger Woods brought the heat at the PGA Tour Championship and the galleries flocked to him.

"It is unbelievable playing with Tiger," says Ryder Cup teammate Justin Thomas. "It will be great, but it will be fun. It will be that fun/nervous.

Woods' overal Ryder Cup record - 13-3-17 (won, halved, lost) - is hardly something to set the Europeans quaking but he is a top gun in singles action and just needs a steady companion to cause some fourball and foursome issues. That man could be 25-year-old Thomas.

The two-time Major winner spoke with the press over at Guyancourt (Le Golf National) and is thrilled at being on the same time as his golfing idol. He remarked:

"I still kind of say that to myself sometimes. It is bizarre, just for me, he's the reason why I love golf so much. He is the person that I was -- when I was seven and eight, nine years old, putting by myself on the putting green, in my head I was making this putt to beat him.

"So it's, again, like a lot of guys on our team, I'm happy to have him on my team, as opposed to playing against him in stroke-play events. It's cool." 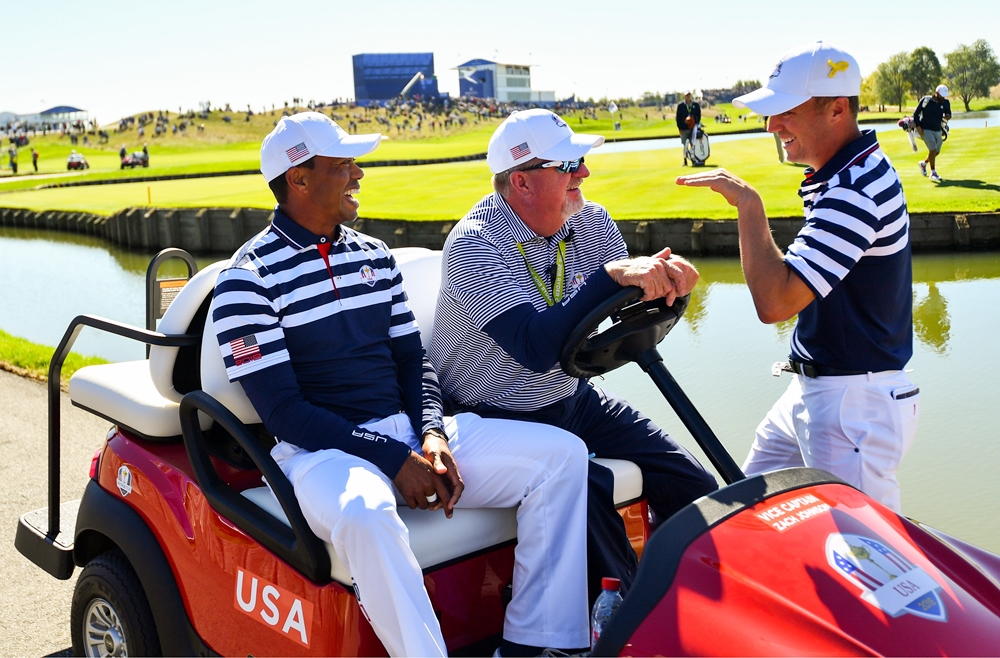 END_OF_DOCUMENT_TOKEN_TO_BE_REPLACED

Back in 2016, Thomas was preparing for his first ever US Masters appearance and reached out to Woods, who was out injured due to his debilitating back issues. The 14-time Major winner was only too happy to give the young gun some advice.

At a time when he could have easily shut himself away, Woods was giving of his time and support. Thomas commented:

"I would say a couple years ago, my first Masters, I reached out to him and just talked to him about Augusta. He wasn't playing, so he was going to be helpful. You know, it's not like it was this year or whenever he plays. His mouth kind of closes a little bit or how much information he gives out is not quite as much.

"So I tried to take advantage of that time when he was hurt as much as I possibly could. I think during that process, I wanted to be there for him as a friend, or as somebody, because the life he lives is so different than everybody else. If he gets bored, he can't go out in public and do something without getting harassed.

"Myself, Rickie Fowler, other guys in Jupiter (Florida), we wanted to hang out with him and we wanted to do whatever he wanted to do. So to be able to have that friendship relationship with him is cool."

Thomas finished 39th in his first Masters appearance and 22nd the year after. He will be hoping for his first ever green jacket in 2019 but, first, Ryder Cup duty with woods awaits.


popular
Baz & Andrew's House Of Rugby - Twickenham carnage
Jacob Stockdale and Johnny Sexton not spared by English press
'Were they up for it more than us? That's my responsibility' - Andy Farrell
Triple Crown wrenched away as England scrape Ireland off their boots
ROG hits the nail on the head assessing Ireland's performance
The Ireland XV that should definitely start against Italy
QUIZ: How well can you remember this season's Premier League results so far?
You may also like
8 months ago
Tiger Woods planning early arrival in Ireland as attention switches to The Open
10 months ago
Tiger Woods took time out at end of his press conference to praise Tony Finau
10 months ago
Tiger Woods on caddy advice that sparked his Masters comeback
10 months ago
Francesco Molinari response to Masters disappointment says so much about him
10 months ago
Patrick Reed is copping grief for how he presented Tiger Woods his green jacket
10 months ago
Whispered Tiger Woods confession really puts Masters triumph into perspective
Next Page