Padraig Harrington feared for his career after freak practice accident

Padraig Harrington will miss this week's PGA Tour event after suffering an elbow injury during practice.

It was not even his own practice.

The FedEx St Jude Classic in Memphis will have to make do without the three-time Major winner after he was hit on the elbow by an amateur player he was coaching.

It sounds like this amateur needs a lot more practice.

However it is no laughing matter, really, as the Dubliner admitted he feared his career was over following the injury. Instead he will miss 12 days as he allows the six stitches to heal.

Just withdrawn from @PGATOUR @fesjcmemphis this week.I was hit on the elbow with a practice swing by an amateur I was coaching at an outing.

Thankfully nothing was broken,just 6 stitches. I thought it was the end of me playing competitive golf.

I'll only be out for 12 days or so to let stitches heal. 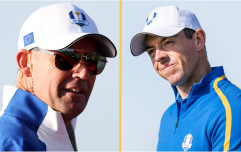 END_OF_DOCUMENT_TOKEN_TO_BE_REPLACED

Harrington returned from an injury lay-off last weekend, finishing in a tie for 31st at the Memorial tournament, having been sidelined following neck surgery back in February.

The incident may give him another chance to fire up that cryotherapy chamber he keeps in the garage.

Knee op recovery is going great,I could already play if I had to.It helps to have a cryotherapy unit in your garage pic.twitter.com/SW4AF4oIq5


popular
The FootballJOE Pub Quiz: Week 10
'I was sitting here this week and people were wondering if I was going to retire'
Andy Farrell's Ireland squad for November internationals to feature some exciting talents
Luiz Felipe in tears after bizarre red card after full-time whistle
Man United aren't good enough to accommodate Ronaldo's refusal to work
Player manager takes over Naas just days before county senior semi-final
"I won't let that happen!" - Peter O'Mahony riled up by Connacht star
You may also like
4 months ago
Phil Mickelson makes golfing history as Irish boys make late run
1 year ago
Padraig Harrington talks us through the greatest shot of his career
1 year ago
The best sporting challenges to use time off to our advantage
2 years ago
Harrington recalls tale of Mickelson's five-figure tab that he had to pay
2 years ago
Padraig Harrington moves into the lead at the Irish Open
2 years ago
Shane Lowry victory speech after €1,000,000 victory shows where his head's at
Next Page