Everyone suddenly cares about the Solheim Cup, for nefarious reasons

One in the eye for Team USA.

Brittany Lincicome and Alison Lee were in tears, this morning, after they lost their fourball to their European opponents in one of the Solheim Cup's most controversial moments.

Suzann Pettersen and Charley Hull of Team Europe were all square with two holes to play when Lee missed a birdie putt. 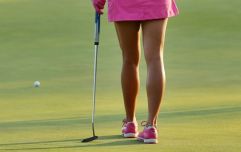 END_OF_DOCUMENT_TOKEN_TO_BE_REPLACED

The American thought the hole had been halved and scooped up her ball, which lay 16 inches from the hole.

However, the Europeans had not conceded the putt.

Confusion reigned for a few minutes until the hole was eventually awarded to Europe. They went 1-Up and closed the match out on the next hole, to give Europe a 10-6 lead going into this afternoon's singles.


popular
World Cup 2022 Day 10: All the major action and talking points
Iran demand action by FIFA after USA team change flag on social media
"I have equal love for football and hurling" - Sheehy set for two Leinster finals in two hours
Canelo Alvarez duped by fake Lionel Messi Instagram post
World Cup 2022 Day Nine: All the major action and talking points
"I appreciate Moycullen now more than ever" - Cooke's American lifestyle from a Moycullen base
Roy Keane's issue with Argentina star could rival Graeme Souness and Paul Pogba
You may also like
4 years ago
David Pocock shares class post-match dressing room picture with Conor Murray
4 years ago
Ian Madigan brilliantly shuts down Twitter user who was complaining about female referees
4 years ago
Sean O'Brien plays very funny prank on shop assistant in Kilkenny
5 years ago
Home and Away's Alf Stewart sends brilliant response to Cork City's league win
5 years ago
Sean O'Brien not impressed with Kearney brothers being referred to as 'famous farm boys'
5 years ago
WATCH: Andy Gray, bless him, got himself a bit muddled while talking about Tony Blair
Next Page