Following his third Major win in 14 months, Brooks Koepka was asked if he ever felt 'rattled or intimidated'.

"I have a lot of self belief. I knew, even today, when everybody was making that charge, if I just hung in there, made one more shot, one good shot at a time, kept it rolling, I knew I was going to have a chance to kind of separate myself maybe a little bit, and that finally came on 15.

"And then to hit such a good shot on 16, and especially to make the putt when Scotty [Adam Scott] almost chipped it in. You know, that could... if I missed that, that could be a real role reversal right there." 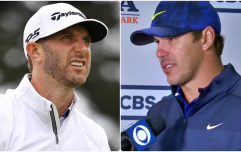 END_OF_DOCUMENT_TOKEN_TO_BE_REPLACED

The CBS and Eleven Sports commentators spoke of the 28-year-old "grinding it out" in his PGA Championship win but his closing round of 66 had its fair share of sublime moments. As second placed Tiger Woods noted, after his round, Koepka was "booming" drives 320 and 340 yards, giving him wedge approaches that he was sticking in birdie range.

Nick Faldo marvelled, on CBS, that Koepka had put himself within 18-feet of the hole, in birdie position, on 41 occasions over his 72 holes. How anyone could hope to compete with that level of accuracy is staggering but there was a hell of a lot of excellent golf on Saturday and Sunday.

Woods, the best of the rest, hit his best ever closing round in a Major (a -6 round of 64) and still finished two adrift.

If the Woods group was the place everyone wanted to be, Koepka and Scott were sedately and serenely going about their own personal duel as the last two out. The Florida native approached Scott last year and told the Aussie that he was one of his idols growing up.

Brooks Koepka shares how special it was to compete against his two childhood favorites, Tiger Woods and Adam Scott.#PGAChamp pic.twitter.com/FbaxVxzLs0 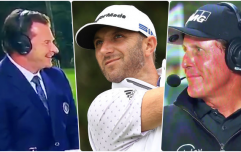 END_OF_DOCUMENT_TOKEN_TO_BE_REPLACED

Scott is 38 now and back in top form, after this weekend, but he could not live with Koepka.

With Scott in trouble off the tee on the 18th, the trophy was definitely heading the American's way but Koepka demurred when it came to him taking the championship's final putt. 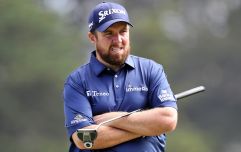 Frustration boils over for Shane Lowry at PGA Championship

END_OF_DOCUMENT_TOKEN_TO_BE_REPLACED

Most fans expected Koepka to mark his ball when his lag putt ended up within two feet of the hole. Scott would surely take his putt, or two, and leave the stage to the champions elect?

Not so. Koepka assessed the situation and sunk his ball before most could notice and it was Scott, missing for par and then tapping in to finish at -13 who closed out a compelling day of golf. Following his victory, Koepka explained his actions to reporters.

"It was so close to the hole, I didn't want to take away from anything that he was doing because I knew he needed to make the putt, and I kind of wanted to get out of his way. Otherwise, if I'd have hit it six, eight inches further and not directly behind the hole, I probably would have marked it.

"But just for the fact that it was in his sight line when he's looking at the hole, especially right with the way it breaks coming up left to right, I just didn't want him staring at it."

A gentleman, right until the end.

Europe's Ryder Cup stars will hope Koepka is as accommodating when he lines up for the USA team in France next month. They'll be hoping that he leaves his 'A' game Stateside, however.


popular
"This game is going to get abandoned" - Mass brawl between Kilcoo and Burren results in six red cards
"He'll have the best seat in the house" - emotional Mageean pays tribute to late great Kiernan after the race of her life
Quiz: Which player has scored more goals for Ireland?
Teddy Sheringham says Roy Keane didn't speak to him for three years at Man United
Court hears cringeworthy poems Ryan Giggs wrote to his ex
Your guide to a huge weekend of sport and how to watch it all
"Or is she? Or is she" - Greg Allen's frantic commentary perfectly captures Louise Shanahan's outstanding run
You may also like
4 years ago
Shane Lowry facing tough decision on Ryder Cup, and we can't blame him
4 years ago
Shane Lowry responds after crass American commentary during his final PGA round
4 years ago
Tiger Woods' classy reaction to Brooks Koepka's win left his girlfriend Jena Sims stunned
4 years ago
Shane Lowry is bloody killing it at the USPGA Championships
4 years ago
Super starts for Shane Lowry and Rickie Fowler at US PGA
4 years ago
Final golf major of the year will not be shown on Irish television
Next Page