Brought to you by

Alright people of Galway, we've got a proposition for you. We're looking to find people skilled enough to conquer both the digital and physical worlds of football, and we've teamed up with Coca-Cola to send them on the trip of a lifetime. 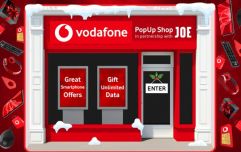 Visit Vodafone’s Pop-Up Shop at JOE with heaps of offers on smartphones, smartwatches and more

END_OF_DOCUMENT_TOKEN_TO_BE_REPLACED

If you can get a high score on our online 5-a-side shootout game, we'll invite you to one of four real tournaments, and the winning team will be sent to the grand final. That final will be held in Dublin, and six lucky ducks will be sent on a Premier League trip they'll never forget.

To make Galway your chosen venue for the initial tournament, simply select it when setting up your account. The Galway tournament will be played on Saturday, 17 August in Astrobay in Renmore.

This year, Coca-Cola wants to send six lucky football fans on the trip of a lifetime. After proving your skills in our online game, we'll be inviting people to play in our five-a-side tournaments across the country, #WhereEveryonePlays.

Brought to you by


popular
"It's giving the Kerry team a bad image. They don't look like footballers, they look like gurriers." - Liveline has peaked
Bundee Aki overheard in the stands after Faf de Klerk hit on Conor Murray
Eoin Murphy's calls from the goals show Cork they're in for a completely different ball-game
"That's one of the best races I've ever had" - Coscoran kicks like a demon to seize the day
Gatland on his decision to start Bundee Aki, and drop Tadhg Beirne
The SportsJOE 12 o'clock quiz | Day 377
Aidan O'Shea better get to a telly soon after his All-Ireland semi-final admission
You may also like
1 month ago
Forget counting your steps, this is the key metric you should be tracking instead
1 month ago
Football fans are going to love these brand new Cadbury chocolate bars
1 month ago
Ireland's 2009 Grand Slam stars recall closest call in our rugby history
1 month ago
4 simple ways you can vastly improve the quality of your sleep
2 months ago
Calling all sports fans! This week's Powerball Super Jackpot is €348 million*, here's how to place your bet
2 months ago
The next generation of fitness trackers is here and it's an absolute game-changer for your health
Next Page