"What was Aidan O'Shea doing? He had a stinker" - Aaron Kernan reacts to O'Shea running onto the field during altercation

"The whole thing had lost the plot at that stage."

With the hundred different talking points that have come from the Dublin v Mayo game at the weekend, one thing sort of went under the radar.

Aidan O'Shea running onto the field, still wearing a bib after being substituted earlier on, and getting involved in an altercation with Philly McMahon was an unusual thing to do.

END_OF_DOCUMENT_TOKEN_TO_BE_REPLACED

The scrummage itself has been well documented and discussed, but O'Shea's actual decision to come from the sideline, knowing full well he isn't a part of what's going on in the field anymore, and choosing to get involved, was very strange.

Speaking on the GAA Hour, Colm Parkinson raises the point.

"Philly came on and started pinching lads, and Aidan O'Shea ran in on the field, and that needs to be called out as well, because you can't be doing that.

"He was in on the field, getting involved with Philly, and it was all getting very messy at that stage." 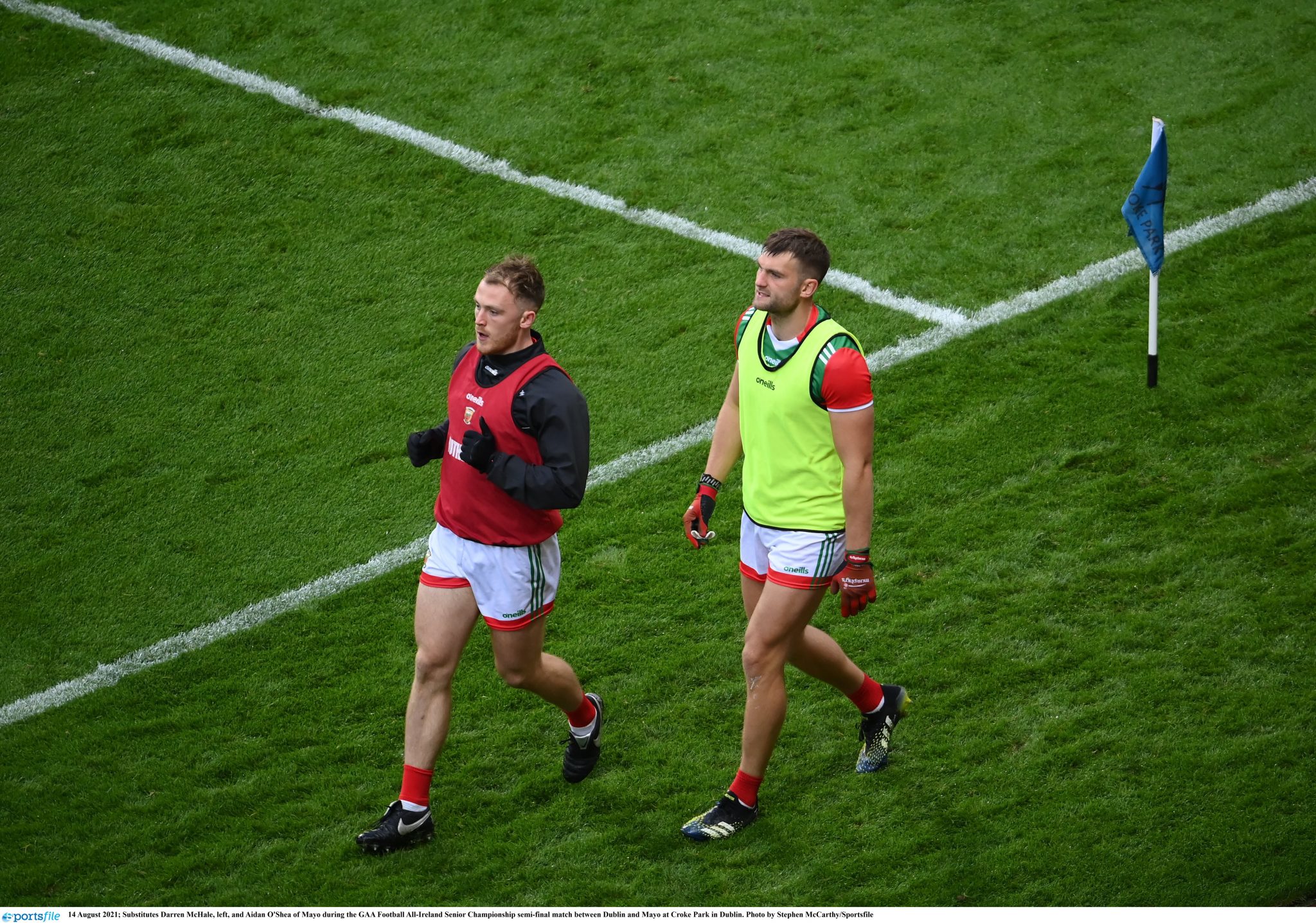 END_OF_DOCUMENT_TOKEN_TO_BE_REPLACED

Former Armagh star Aaron Kernan was also on the show, and he couldn't make sense of the Mayo captain's decision to run onto the field after being subbed.

"To be honest, the whole thing had lost the plot at that stage, I couldn't believe what I was seeing because I didn't hear the whistle blowing, and I don't even believe the whistle was blown.

"I don't know whether full time was up or not, but to be fair to Conor Lane he had to just stop it at that stage, it was chaos.

"But what was Aidan O'Shea doing running out, into the middle of the field, after being that rank during the game? He had a stinker.

"His head was gone and he was sitting in the stands, he was just getting caught up in the whole emotion where there was the big comeback. They had drawn level, but I would say he found himself in the middle of that field and he was thinking, 'what am I after doing, what am I doing here?'" 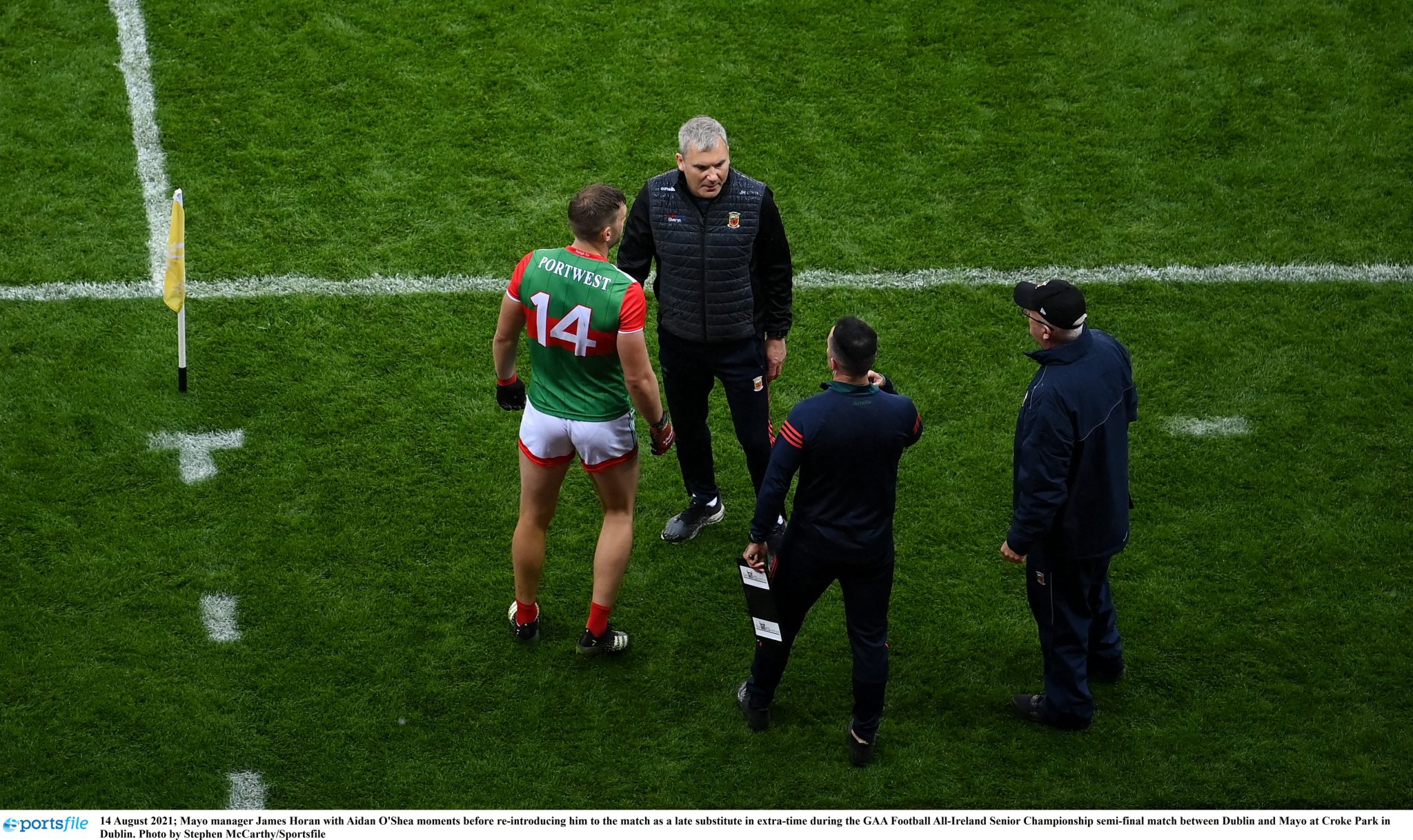 END_OF_DOCUMENT_TOKEN_TO_BE_REPLACED

"To be fair to him, he wasn't in the stands, he was down warming up, he would have ran in, he obviously got a rush of blood," added Parkinson.

"That's fair enough," replied Kernan. "But under no circumstances do you run onto the field whenever you're off as a sub in that situation, it's certainly not going to sort things out, it's just going to make things worse.

"It was only a bit of handbags, pushing and shoving, the usual, trying to see who can rip whose jersey here, but it wasn't helpful to the situation."

"To be fair, Aidan O'Shea is getting a free pass on this. If that was Philly McMahon running on with a bib on from the sideline, that reaction would have been a lot worse, I'm sure," concluded Parkinson.


popular
Andy Farrell goes for Munster veterans as Ireland team to face New Zealand named
The four stone-cold certainties for All-Stars even as early as this
Eamon McGee just couldn't help himself with Armagh-melee tweet
Kylian Mbappe reportedly wants PSG to sell Neymar
"The economy was one of the big reasons" - Cadogan's move from an electrician to personal training
"He's actually smiling putting the ball over the bar. He should nearly be fainting." - Ryall on Limerick's legacy
Gavin Coombes one of four Irish players to push themselves into Test picture
You may also like
2 days ago
'They’re a distraction' - Barry Cahill on players outside of the 26-man panel being on the pitch
2 days ago
Colm Cooper calls for "harsher penalties and more severe" punishments to stop brawls
2 days ago
Eamon McGee just couldn't help himself with Armagh-melee tweet
3 days ago
Roy Keane makes good on bet after seeing Cork fall to Dublin
4 days ago
Shane McGuigan does a 'Sueey' Cristiano Ronaldo would be proud of after winning MOTM
4 days ago
Glass half full as Derry's positive play produces five fantastic goals to reach All-Ireland semis
Next Page