"What did Paul Donaghy do to p*ss Mickey Harte off?" - Why Donaghy's dream debut is so exciting for Tyrone fans

"He's a bit like Clifford, soloing off the right and left, can kick with both feet, he had no fear."

Dungannon Clarkes' Paul Donaghy had a dream debut against Donegal on Saturday in the first game of Tyrone's National League campaign. He might not have gotten the win against the green-and-golds, but on a personal level, he scored 10 points and played with the kind of fearless confidence that would scare any defender in the country.

Speaking on the GAA Hour, former Tyrone veteran Colm Cavanagh shared his thoughts: "I've known him for a number of years.

"He's a young lad. He used to play for a club Edendork up here, and was always a fairly good player who we would have played regularly, but couldn't really have stood him out. Darren McCurry was always the stand out player for Edendork.

Wonder what Paul Donaghy did to piss Mickey Harte off 😁

"He subsequently moved to Dungannon, one of the local clubs last year and ended up winning the Tyrone Championship and he was un-markable. He was doing what he was doing there at the weekend. He was getting on the ball, scoring from absolutely everywhere; he couldn't miss.

"He's a bit like Clifford in a way, soloing right and left, can kick with both feet, he had no fear, he went into the game and just took it by the scruff of the neck."

Donaghy's obvious talent and ability to score from play wasn't the only bonus for Tyrone, as his skill on the dead ball was equally impressive, stepping up to take the free kicks, despite it being his county debut.

END_OF_DOCUMENT_TOKEN_TO_BE_REPLACED

"One of the big plus points from seeing him at the weekend was his free-taking - knowing him from club football, he's able to hit frees fairly comfortably and it's something Tyrone has probably struggled with in the last number of years," added Cavanagh. 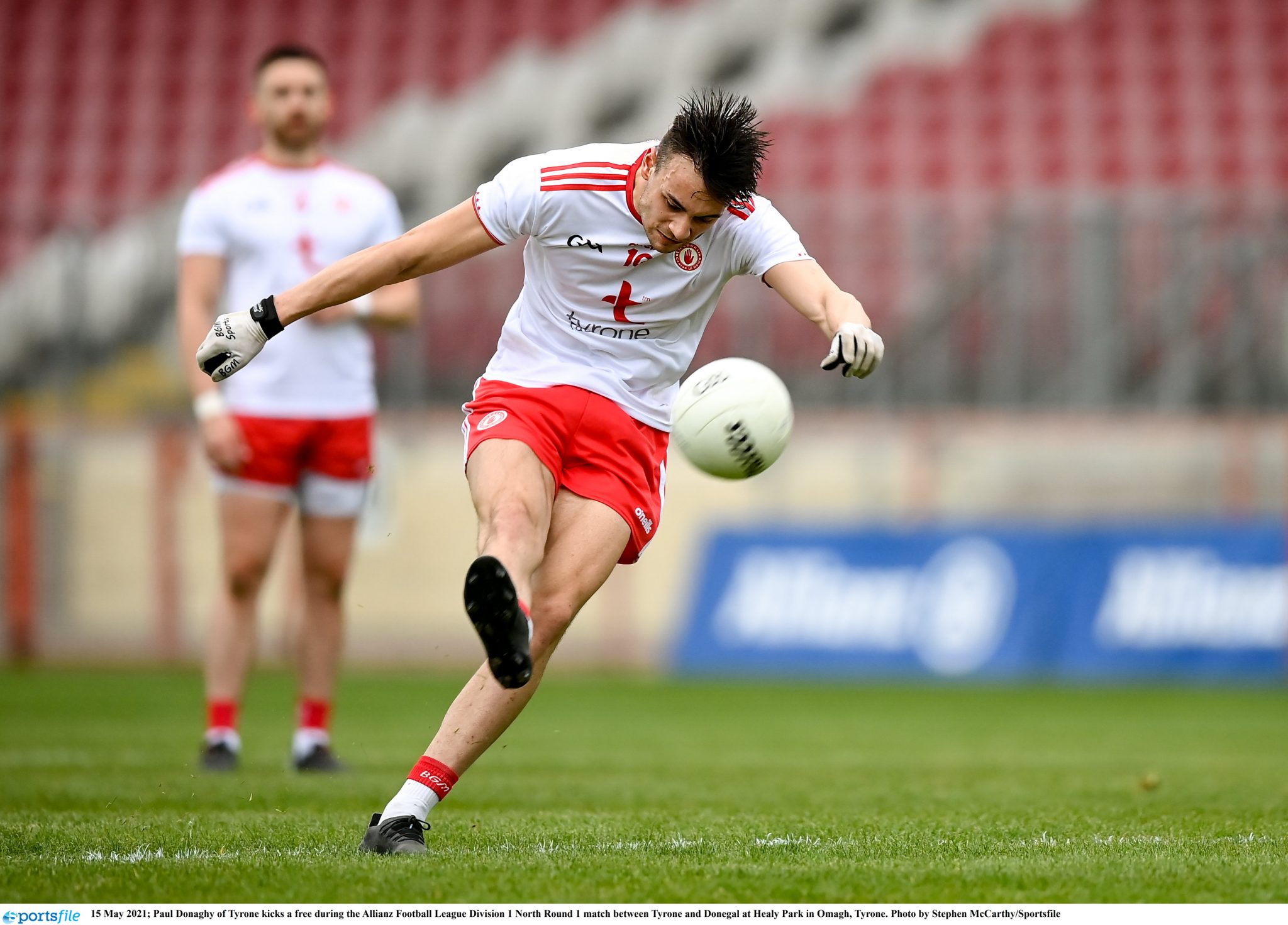 "Mickey, I think, did ask him in last year from what I'm hearing in the grapevine, he did actually get asked - whether it was a trial or to be on the team I don't know but he's came back this year and what a way to start it."

Kildare legend Johnny Doyle always oozed class on the football field and he too was hugely impressed by Donaghy's performance.

"To do it on your debut as well, like whatever if you're a seasoned campaigner and you try a few of these things - he played with that freedom, no pressure," said Doyle.

END_OF_DOCUMENT_TOKEN_TO_BE_REPLACED

Parkinson added: "I remember my debut. I take the 'young so no pressure' thing, after your debut - I felt unbelievably nervous and under pressure in my debut!

"I do accept that then a few games after that, you get the passes of being young, but it's not pressure from the outside, it's the pressure you feel to prove yourself on your debut."

"I was the same," confessed Doyle. "You ramp yourself up and you nearly play a game before you play the game, it normally doesn't work out for you.

"I suppose sometimes with a young lad, you maybe go in with that open mindset and think 'let's see how this goes, if it doesn't work out, I'm no worse off' and just play with that freedom and expression."

Listen to the full discussion on The GAA Hour here!


popular
"I never really cried or got emotional over what I've done as an individual. I couldn't give a s***"
"If I break my wrist, it's on f***ing both of you." - Koepka and Berger act the spoiled child
"I was off the grid" - Aidan O'Shea respond's to Mayo criticism after club championship win
The FootballJOE Pub Quiz: Week 7
Garry Ringrose raves about four young Leinster stars to watch this season
'I won The Open by six shots in my home country, but this was the best week of my golfing career'
Galway fans' frosty reception for Davy Fitz doesn't make any sense
You may also like
2 weeks ago
"There were murmurs that he didn't have it on the big days" - McCurry's redemption
2 weeks ago
"Why is he going for the top right hand corner?" - The GAA Hour break down Ryan O’Donoghue’s penalty miss
2 weeks ago
"I do think Dublin were complacent, you could even see it in their play" - Briege Corkery
3 weeks ago
"To us, I think that was a huge insult. How we got there was definitely not through luck"
4 weeks ago
'From a Tyrone perspective, I was glad to see Tommy Walsh take that shot'
1 month ago
"Hegarty looks like he's hitting with a pitching wedge. Diarmaid looks like he's going with the driver"
Next Page