Straight out of school, Conor McKenna, the future of Eglish and of Tyrone, was snapped up. At the AFL draft, he lorded it and Essendon were all over him.

Professional sport. Sunny Melbourne. All day long. Nobody in their right mind would think twice and McKenna, as an 18-year-old, completed his first pre-season Down Under before Christmas 2014.

But when he came home, he did not want to go back.

"18 is very young, I went out at 18, straight from school, and that breaks many players. I was very immature when I went over like, I never had a full-time job. I went straight from school, getting a good pay and I didn't know what to do with it...you really were on your own," he says to Colm Parkinson on Thursday's GAA Hour Show. 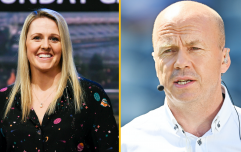 END_OF_DOCUMENT_TOKEN_TO_BE_REPLACED

Zap on five and a half years. McKenna is a fan favourite at Essendon, one of the team's most talented and important players with over 73 appearances and 19 goals to his name. But the battle is still the same.

While his performances have been stand-out, his skills precocious, the Tyrone man has never really overcome the the lure of Eglish, the memories of Tyrone. On a number of occasions, the most recent less than two months ago, McKenna has made unscheduled trips back to Ireland due to home-sickness.

"I've always said I want to get home at some stage and play Gaelic. I still have a year and a half, this season and next season on the contract so the idea is to finish it out and see what happens, I definitely have the idea of coming home in the next 1-3 years before I'm done playing Gaelic..."

"Every year, I've struggled with home-sickness, and this year was probably the worst it has been after the first year. This year, after Christmas, I just couldn't really get settled. There was times, I couldn't finish training, I'd just walk off, there was a couple of times I was in tears and I didn't know what it was but one time it happened, I met one of the lads in the club and just told him I want to go home and see what happens, that's when I came home a month ago, but the club are really good with me..."

END_OF_DOCUMENT_TOKEN_TO_BE_REPLACED

With McKenna playing so well, the club were always going to be understanding. Gaelic football is what he misses most.

"I went to the All-Ireland final two years ago, Tyrone v Dublin, I was sitting in the stand watching it with one of my mates and I felt sick just watching it. You want them so much to win but you're hurting so much watching them do it, it was something you always wanted to do..."

For now, McKenna is home for an extended spell with the AFL suspended until May 31, and he spent his first two weeks training away up in Downings with his teammates, Meath man Cian McBride and Ross McQuillan from Armagh.

"Cian's lucky enough to have a holiday home up there in Downings in Donegal where his da's from so the three of us went up there and did isolation together, it was lovely, just nice weather and it's only 100metres from the beech, so we were just running on the beech most days, walking on mountains, just keeping busy..."

"We got a weekly programme there to do, it involves weights, one day of cross-training, then three days of running - one to do with speed, one with distance, so we're just doing that, ticking over until we get the phone call to go back..."

But it's not all hunky dory for AFL players, who have been forced to take a 50% pay-cut, that could rise even further.

"On a pay cut now for the next two months, 50%, then if we don't go back to resuming games soon after, it'll be up to 80%. I'm just happy to be home, I'm still paying rent in Australia but there's no rent over here and free dinners too so it levels itself out!

You can listen to the Conor McKenna interview and much more from this week's GAA Hour.