The strange feeling of scoring a goal into Hill 16

So, this was the sight in Hill 16 two seconds after Killian Spillane had rattled the Dublin net. 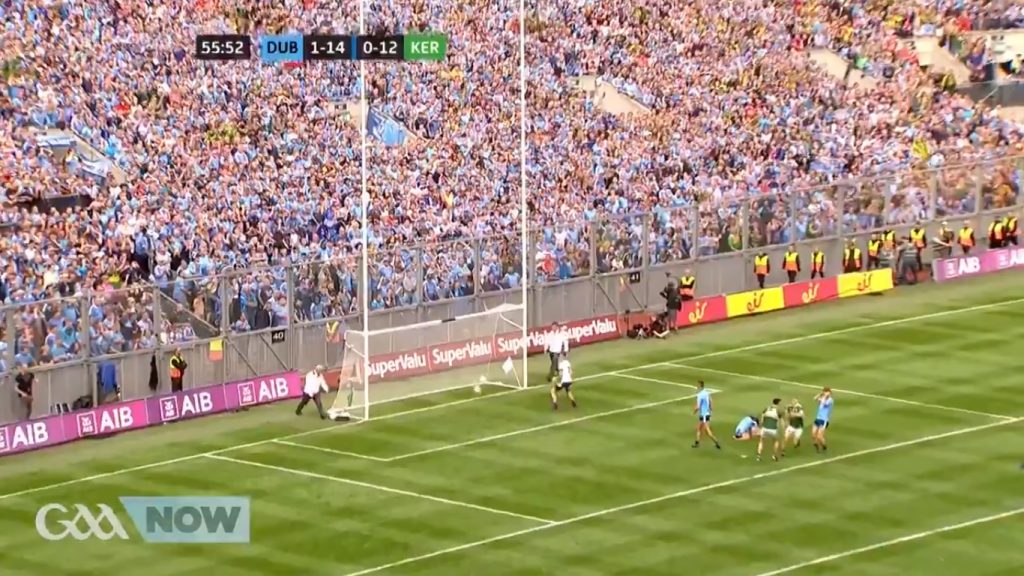 Let's make that a little clearer you.

Except for one fella.

From the Hogan Stand, the sight was a bizarre one. The Cusack stand too. A fella had just banged in a screamer to re-ignite the All-Ireland final and still, there wasn't so much as a budge or even a mig out of the ten thousand or so people who had the best view of it.

We're not used to this. Goals always get the crowd going, no matter where their spot is. And this wasn't just an ordinary goal.

END_OF_DOCUMENT_TOKEN_TO_BE_REPLACED

There's another reason for our lack of familiarity though.

These days, Dublin don't concede all that many goals and fewer still are the amount conceded at the Dineen Hill 16 end. Dublin's perch, opposition goals aren't that kindly received.

And so, all around the grounds, Kerry fans were double-guessing themselves. Worried that the eerie silence meant play had been called back. Maybe Hawk-Eye was acting up above Shane Ryan's head.

That is the way you finish them

Killian Spillane of @Templenoeabu pure ice and now we have a game pic.twitter.com/FGirANmVyE

"Spillane's goal was phenomenal but when a goal goes into Hill 16, I was actually thinking, 'has that goal been disallowed?' It's just so surreal. Nobody cheers, nobody moves. The camera is on the Hill and it's just deathly silence. I think it's so weird when opposition score a goal into Hill 16..."

Cian Ward has been there before.

"Having scored a goal into Hill 16," says the Meath man with a laugh "It's strange because you score the goal and despite the fact that there's a massive crowd in front of you where you're after kicking the ball in, all the noise is coming from behind or left or right of you. There's just no noise from directly in front of you, just crossed arms..."

It might make it all the sweeter for the opposition. Although Dublin's attitude towards the iconic Hill 16 end appears to have changed down through the years. While the team used always angle to finish shooting into the Hill, the current team have relaxed that stance.

Steven Cluxton for example, opted to play into the Hill in the first half on Sunday when he won the toss. Not long after that toss, a couple of boos were heard from Hill 16 as the players took a turn at the 45 rather than the 21. This was due to time constraints with the minor game having gone to extra-time.

"The parade turned along the 45 instead of marching along the 21 in front of the Hill, and the Hill started booing. I haven't seen that before, I don't know if that's an All-Ireland final thing but they came to the 45 and came across there. There were loads of boos. I would say both Kerry and Dublin players would have enjoyed that, I did it before and it was a cool thing to do. You know there's no pressure because the game's not on..."


popular
"I did enjoy Roy Keane absolutely sh*tting his pants when someone tougher than him challenged him"
You'd be doing extremely well to get 100% in this US sports badge quiz
The SportsJOE 12 o'clock quiz | Day 192
Josh van der Flier recalls first Leinster training session with Brian O'Driscoll
Johann van Graan addresses talk of Munster return for Simon Zebo
SportsJOE 2000s Football Quiz | Round 2
The SportsJOE 12 o'clock quiz | Day 193
You may also like
2 weeks ago
"My own mother would go to three games on Saturday, three games on Sunday"
1 month ago
"I'd say to fellas 'if you bring a friend and they stay playing, we'll give you a prize"
1 month ago
"That's a risk I'd be willing to take" - Byrne ready and raring for a championship
1 month ago
Goal disallowed in Dublin SFC because player wasn't wearing his gumshield
2 months ago
The former Dublin minor star that led Ireland to Grand Slam glory
3 months ago
No promotion or relegation in Dublin championship in 2020
Next Page