If he had gotten a bit more luck, Paudie Clifford could have been making a difference for Kerry this year.

Having shown well for East Kerry in the 2018 championship, it was fair to say he'd put himself in the shop window. Playing a key role in UCC's Sigerson Cup triumph, this fella was on the cusp of it.

Unfortunately for him, disaster struck in a club game in March when a serious leg injury ended his day. It would go on to end his year as far as Kerry football is concerned.

So, instead of Croke Park and summer championship Sundays, Paudie Clifford spent his summer on the other side of the world. America was his resting place as Kerry made it all the way to the All-Ireland final.

The best is yet to come.

Ah nothing much, just David Clifford taking the piss of a Saturday eveningpic.twitter.com/4kjOqriYwc

His younger brother David didn't delay in making his mark but good things come to those who wait. Paudie will have his time yet.

Saturday night's evidence suggests his time is only around the corner. East Kerry absolutely demolished a disappointing Dingle challenge in the Kerry quarter final and as you would expect, the brothers from Fossa had a huge part to play in it.

David was in relentless form. It was poetry in motion watching the best young footballer in the country plot his way to 1-5 from play. 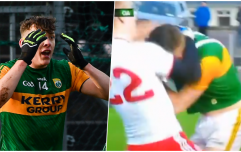 END_OF_DOCUMENT_TOKEN_TO_BE_REPLACED

We're used to that kind of thing from him, but his brother's form was just as eye-catching. Lining out at centre forward, Paudie covered every blade and he always moved with pace.

His left foot is a gem too and while kicking two fine scores from play, it was his link-up play and his composure in possession that was most impressive.

The smile he brings to young player's faces. The example and the inspiration he sets out in front of them.

What it's all about

More of a provider, he put a number of scores on a plate for David and the dazzling Darragh Roche in the full forward line, who had the Dingle rearguard in a spin.

Speaking on RTÉ after the game, Tomás Ó Sé talked up the older Clifford brother's claims for a spot on the Kerry panel.

"I'd be very surprised - it's in these types of matches that guys put up their hands for Kerry and he's a guy that you'd have to say would could possibly be a Kerry player in the future," said Ó Sé.

"He would add to it. He was the link-man throughout tonight. I saw him with UCC last year and I definitely thought he's a guy who could do something with Kerry. I'd say injury hampered any chance he had, it's a long time between this and next year, but he's definitely put his hand up..."

"His biggest strength is how clever he is. He can see stuff that's happening, he can make the quick run and if it's not for him - he can take himself out of the play. But one of the best abilities he has is to get up and down the field. He was on the end of an awful lot of scores but then he can get back and work hard too and tackle and create too..."


popular
ROG hits the nail on the head assessing Ireland's performance
The Ireland XV that should definitely start against Italy
Triple Crown wrenched away as England scrape Ireland off their boots
QUIZ: How well can you remember this season's Premier League results so far?
Player ratings on a dismal day for Ireland in Twickenham
Tyson Fury reveals what happened when he sparred Anthony Joshua
"Next thing, all I see is this 'BANG' coming in over me... It was O'Driscoll"
You may also like
4 weeks ago
Two giants rise above the fray
4 weeks ago
Kerry vs. Dublin ends in meleé, and a draw
4 weeks ago
David Clifford leaves Dublin for dead to score sublime goal
4 weeks ago
Wexford trailblazers go down but father and son show why club GAA is best
2 months ago
15-year-old in Kerry doesn't even need to bounce ball on way to brilliant intercept goal
2 months ago
GAA JOE football team of the weekend
Next Page