"I was scratching my head thinking ‘Did I see that right?’"

In a cagey, tight, first-half between Galway and Derry, points were pretty scarce to see, and spectators were deprived of that satisfying feeling when you see the ball sail over the bar again and again.

So when Shane Walsh kicked a solid looking score between the posts, it was a rare feeling of excitement in pretty dull half of football.

That was until Hawk-eye intervened and ruled the point out, stating that it went wide of the post. You can't argue with the hard cold facts of technology and video replays, so everyone just pretty much accepted it for what it was. 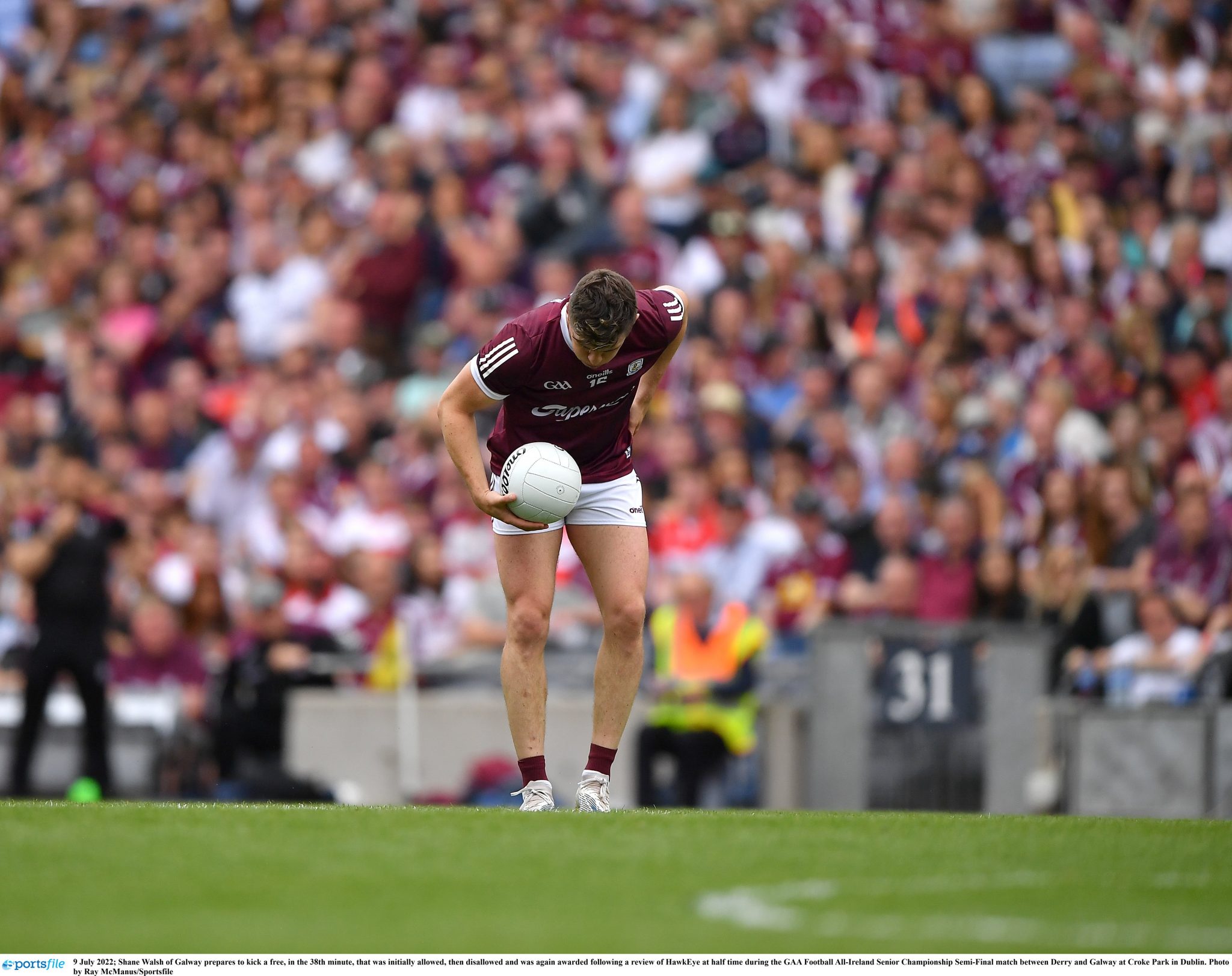 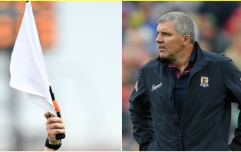 END_OF_DOCUMENT_TOKEN_TO_BE_REPLACED

Then when the video footage was replayed to the viewers, and it was plain to see for everyone that the ball did indeed go over - chaos ensued.

In an unprecedented move, the referee overturned the ruling, and awarded the point before the second half started.

It was the biggest talking point of the game as the whole system was brought into question, but Walsh did not feel too aggrieved. 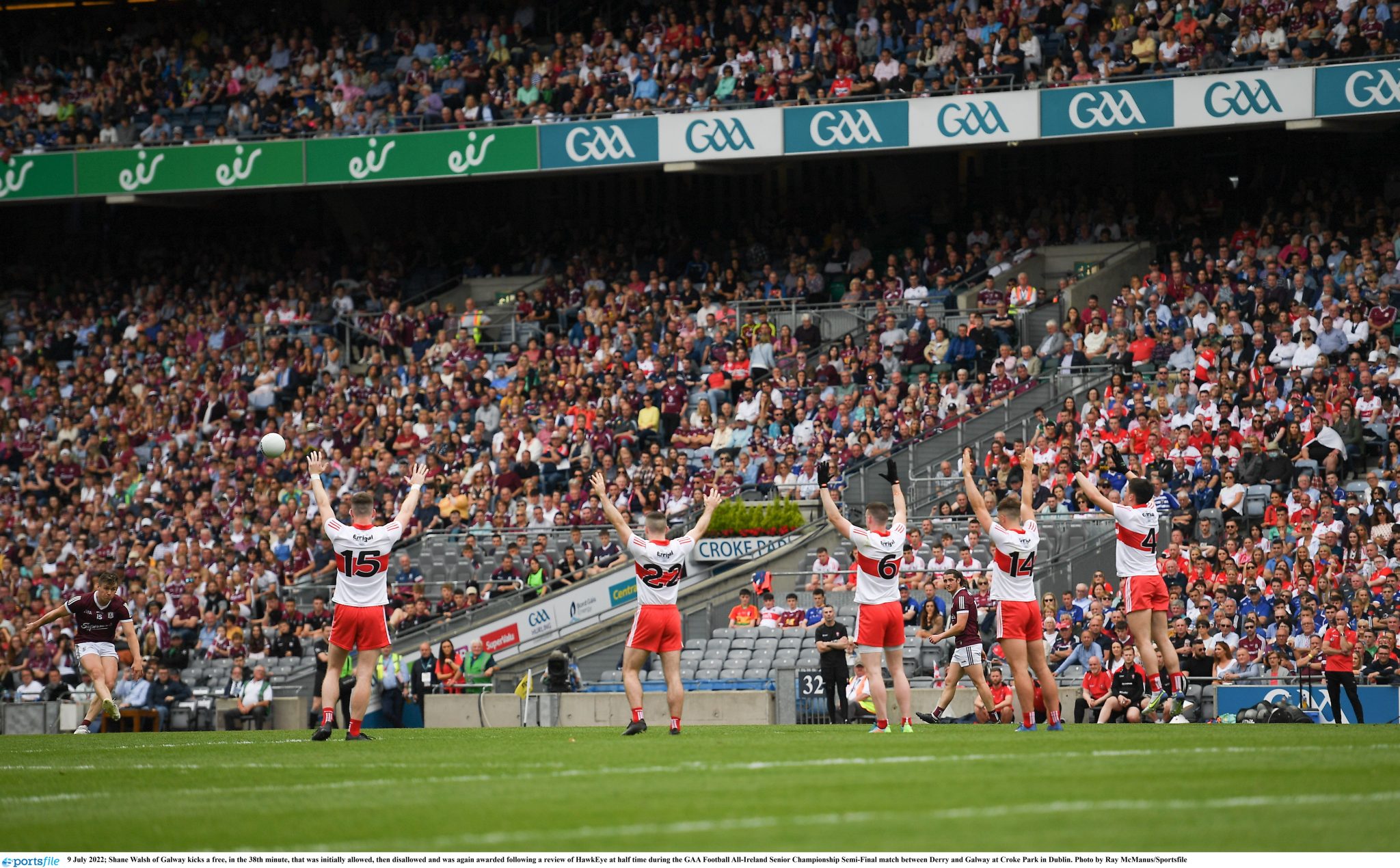 "When I kicked it, I was kind of saying ‘Come in come in’ and next thing it did, so, lovely," said the sharp shooter.

"I was jogging up and as far as I was concerned it went over. As I understood it Hawk-Eye only ever came in when there was a mistake.

"I turned around then and I could see Damo [Comer] giving out, shock, and the next thing the ref is saying he’s not telling Hawk-Eye, Hawk-Eye is telling him.

"I was scratching my head thinking ‘Did I see that right?’ I knew I was to the left of the goal, I wasn’t straight on. But at the same time I have kicked so many of them in training and that I thought the line looked perfect. 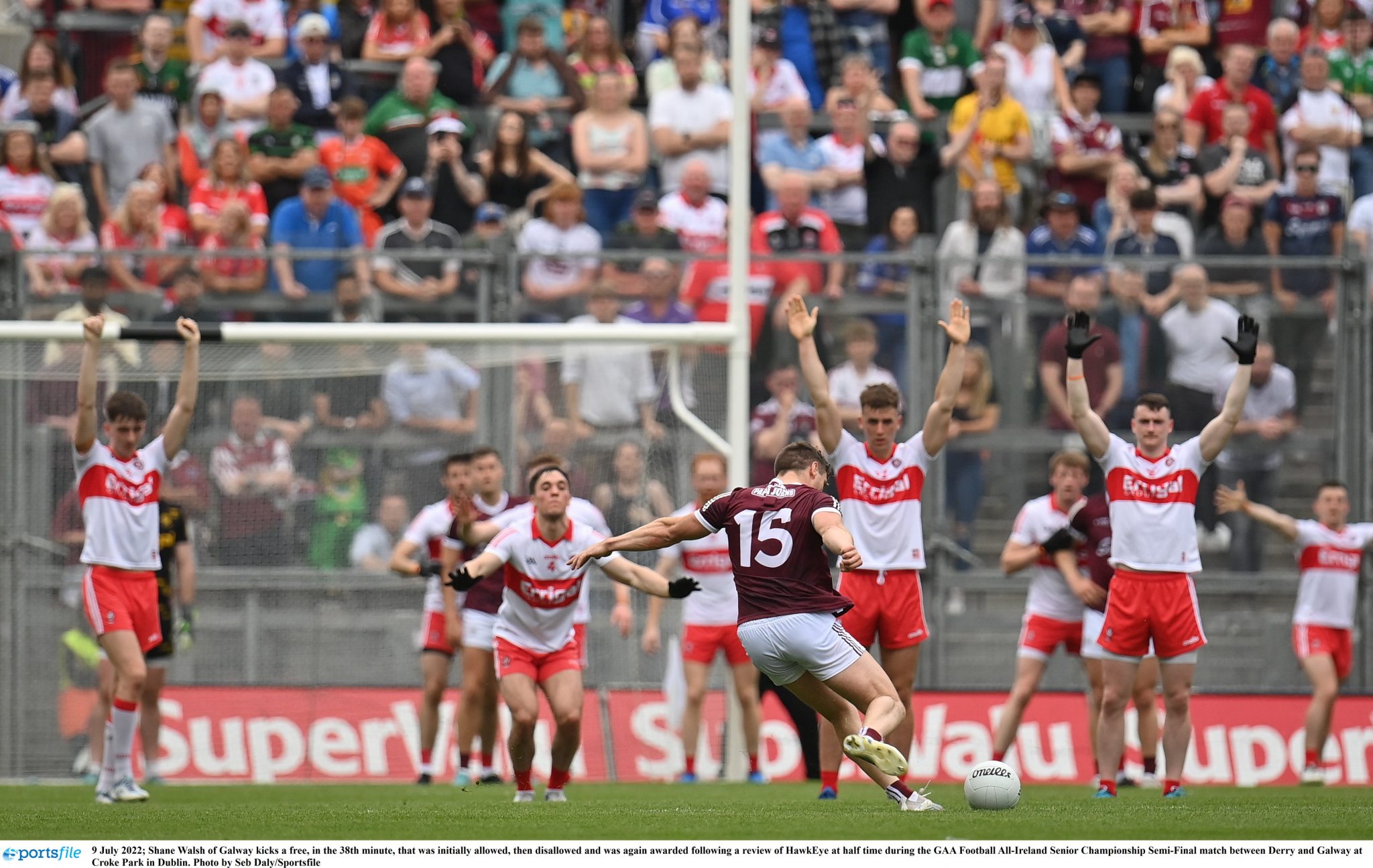 "I'm not going to be able to influence that decision right now. It'll be something you'll look back on probably after the game, and hopefully get over it.

"It was a strange one the way it all panned out. In fairness to Damo and the others they were under the goals at the time. Even the umpire was sure with his decision." 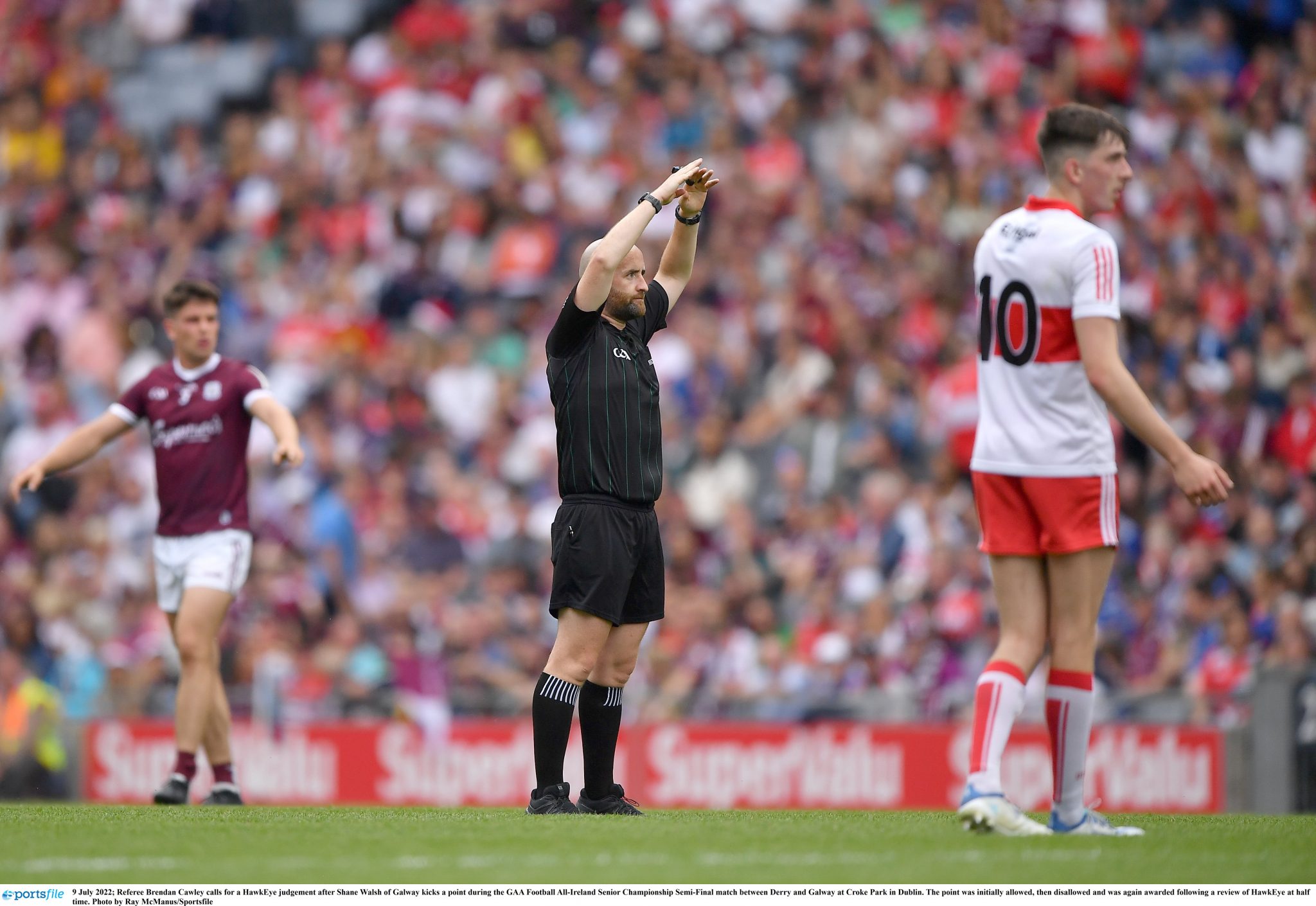 In all of his good grace, Walsh even bumped into the man who made that decision, and didn't hold any grudges.

"Yeah, it was actually a funny story, in the All-Ireland Final I was behind the goal in the first half for water and I was kind of messing with the umpire just showing him my jersey and saying he's having a hold of me here, just keep an eye out. 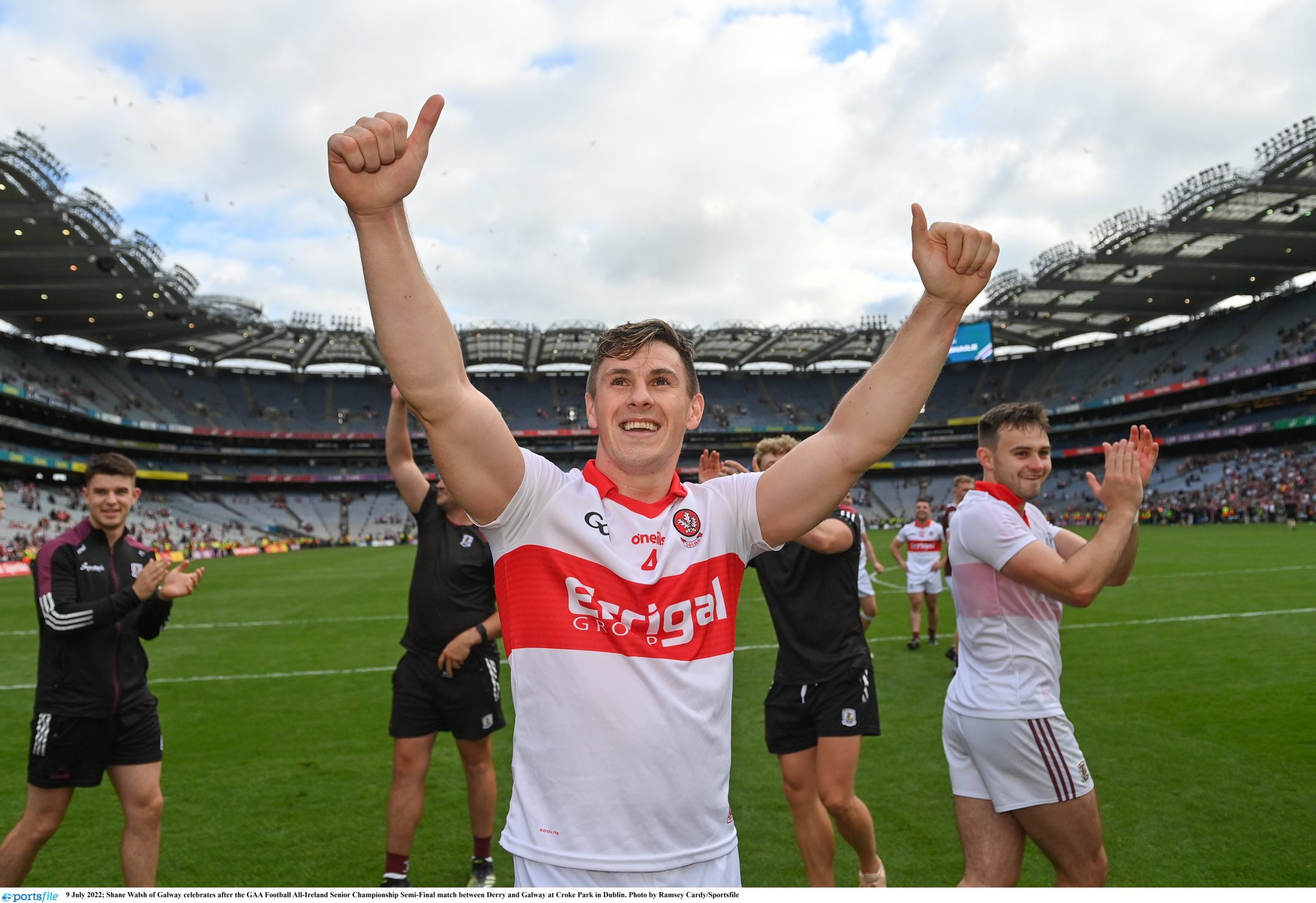 "I was kind of looking at him, like what do you mean? And he said, 'I was in charge of Hawkeye that day'. So I said, 'we came to the right conclusion at the end of it all so I won't fall out with you now unless something goes against me today!'"


popular
World Cup 2022 Day 12: All the major action and talking points
France demand FIFA change result of World Cup defeat over 'rule break'
Cristiano Ronaldo 'agrees £173m-a-year deal' with Saudi club
Damien Duff makes 'brutally honest' England World Cup prediction after Wales win
"Nowadays, even if I don't hit a ball, I don't care as long as we win" - Gleeson learning from the past
Castleknock's Warnock the hero as Maynooth win first ever Ryan Cup final
World Cup 2022 Day 11: All the major action and talking points
You may also like
3 months ago
"It wasn't communicated very well" - Conor Glass criticises GAA for role in Shane Walsh's Hawkeye debacle
3 months ago
Shane Walsh reveals why he wasn't as prolific against Derry and how he knew he was going to perform in All-Ireland final
3 months ago
Galway dominates as GAA Minor Star Football Team of the Year is announced
3 months ago
"It was unfair on the Galway backs” - Tomás Ó Sé admits that Kerry benefitted from unfair rule
3 months ago
Colm O'Rourke belives that Shane Walsh should at least wait a year before making club transfer
3 months ago
Bernard Brogan tweets Shane Walsh interesting proposition regarding Dublin club transfer
Next Page