One of Padraic Joyce's first acts as Galway manager was to make Shane Walsh captain.

It was an early statement of intent. Much like when Eamon O'Shea entrusted Seamus Callanan with Tipperary's free-taking duties in 2014, the manager showed faith and the player responded.

In Callanan's case, he transformed from a potentially game-changing player to the best in the land. Just two games into the Joyce revolution, and Shane Walsh is already playing the football of his life.

A closer look at the Callanan link shows that Walsh and his Tipperary counterpart have plenty in common.

To date, Shane Walsh's career is none too dissimilar to Callanan's early years in the blue and gold. Rated to the sky and with a gold carat skill-set, Tipperary folk always knew that the Drom and Inch forward had something special, yet to reach the very top, he needed to add some more consistency to his game.

The year is 2020 and Shane Walsh is still wearing Mikasa gloves.

A hero we can all get behind 🙌🙌 pic.twitter.com/mgX7EdCOJF

Callanan revelled in the responsibility and and now he's Hurler of the year. He was 25 when he was made Tipp's main man, Shane Walsh is just a year older now.

The sky is the limit for that man, and as he graced Letterkenny with another jaw-dropping performance on Sunday afternoon, everyone connected with Galway football could feel the beginning of something seismic.

"He's becoming a real leader for Galway, now I know he had one great year under Kevin Walsh when he got man-of-the-match in the Connacht final and he was playing really well - but that was kind of living off scraps. This is him being in the game all the time, he's constantly in the game, constantly running at lads," said Colm Parkinson on Monday's GAA Hour Show. 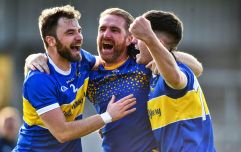 END_OF_DOCUMENT_TOKEN_TO_BE_REPLACED

"He's a total confidence player, and I think it was a bit brittle - hand-passing it off isn't his game. His game is excitement and taking lads on..."

"Did you see him getting a ball yesterday where he wasn't either on the 45 or inside it? All the balls he's getting are in offensive positions where he's on the ball and he's running, and he's causing mayhem and panic..."

And he wasn't just causing panic for any defender.

"He's doing this with Eoghan Bán Gallagher trying to mark him as well, and Gallagher couldn't cope with him," added Conan Doherty.

The Killybegs back man is one of the fastest players in the game, but Walsh sped away from him.

"It seems to be a ploy now to get him on the ball. What I love about him is his range off both feet - he kicks frees, sidelines off both feet. He's just an unbelievably skilful player, most fellas, when they come forward and they don't have a shot off naturally, it's a lateral pass or it's back out to the centre of the field. He steps inside and he drives at the guys again," he said.

"For me, the main difference in Shane Walsh under Kevin Walsh and Padraic Joyce is that he's not worried of losing possession all the time. He's being expressive, he's probing the opposition, he's taking them all on," he added.

And we'll leave the last word to Colm Parkinson.

"Imagine having someone like Shane Walsh and using him back on his own 45. It's like having a Ferrari and going out to a field with it. It doesn't make sense, you should be driving down the main street with that..."

popular
The SportsJOE 12 o'clock quiz | Sam Bennett special (Day 184)
Irish cyclist Sam Bennett delivers classic putdown to British cycling magazine
"We never ever do that. Okay?" Klopp scolds Liverpool bench for reaction to red card
The SportsJOE 12 o'clock quiz | Day 183
The SportsJOE 12 o'clock quiz | Day 182
Peter Sagan pays classy tribute ahead of Sam Bennett's big moment
Sam Bennett's green jersey masterclass got Lance Armstrong talking
You may also like
1 week ago
"You'd be wondering whether you need to bring the hurleys over or what gear you'd need to bring"
2 weeks ago
More Mahonys on their way as younger brothers take on the mantle in Ballygunner
3 weeks ago
"I haven't heard a thing. And I don't think I will to be honest with you"
4 weeks ago
"Shaun Murphy sent me a photo with the seven of them, and that was lovely to get"
1 month ago
"There's times I do think I probably have let people down but in fairness, I have got good support from back home"
1 month ago
"Don't consider carpooling to training is the advice now" - Killeavy back in business
Next Page