Universal respect for the man who had a universal effect.

There's probably not one being on this planet who would ever deny Colm Cooper his dues as one of the greatest the game has ever seen.

Masterful with a football, tactful with his ambitions, he reinvented a sport that was in the middle of being reinvented in a different direction. With pure gracefulness and elegance, Gooch was a destructive force who tore apart all before him in the most beautiful way.

Like the opposite of Roy Keane, Colm Cooper's pure desire is overlooked because of his skill, writes @ConanDohertyhttps://t.co/r9ga2LY58h 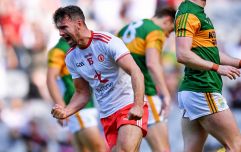 END_OF_DOCUMENT_TOKEN_TO_BE_REPLACED

As Gaelic Football changed rapidly at the turn of the millennium and everyone bought into the idea that conditioning had a direct correlation with success, Colm Cooper garnered eight All-Stars for himself and five All-Irelands for his county by playing ball.

When guys were off curling their biceps, the man who will go down in history was too busy kicking points and goals and his legacy will never be questioned now because of his decisions.

From idol to teammate to friend it's been some journey! Delighted I got the chance to play with the best, great memories @colmcooper13 pic.twitter.com/MWhHzt5Ut4

His impact was felt far and wide and loved all over.

What a footballer The Gooch has been. Unmarkable at his best. The greatest 'Two trick pony' you're ever likely to see... Been a pleasure pic.twitter.com/oqkIiV8ZhO

@colmcooper13, one of the best forwards ever to play our game. An absolute joy to watch and lit up Croke park in many of an occasion.

But it was Ronan O'Gara who summed up the man and his genius to complete perfection.

The Irish rugby legend is hardly a stranger to the values of strength and conditioning coming from the background he does but even O'Gara prioritised the skill levels he had with the oval ball over how much he could bench press.

When you're playing sport - especially football - it all boils down to whether or not you can actually play. For Cooper, he excelled above everyone else - probably across the entire history of the game - because of the possibilities he could see in his head and the way he could execute them with his body.

In that sense, he was a trailblazer in the modern game and one which O'Gara appreciated to the maximum.

A footballing genius bows out. Bravo Gooch. You showed why brains and speed of thought always wins out.

Even Cork men can hold their hands up.


popular
Roy Keane reacts to Brazil's jubilant celebrations in first half demolition job
World Cup 2022 Day 16: All the major action and talking points
Didi Hamann thought Brazil substitution was "disrespectful" to South Korea
Roy Keane handled Gary Neville’s goal celebration as most Irish fans would
Portugal boss could strip Cristiano Ronaldo of captaincy
Rory McIlroy explains 'falling out' with Shane Lowry that lasted a few years
World Cup 2022 Day 17: All the major action and talking points
You may also like
1 week ago
Ronan O'Gara confirms he is on shortlist for England head coach job
3 weeks ago
Ronan O'Gara posts lovely Jack Crowley message after Cork youngster's Ireland debut
1 month ago
"Suddenly, up pops Ronan O'Gara" - How the European champions 'threw a lifeline' and saved a rugby career
1 month ago
"You throw a stone across the river, you're in Waterford, boy!" - Tadhg Furlong on growing up near Munster border
1 month ago
"Ronan O'Gara came in and said, 'On the 28th of May, we are winning the Champions Cup'"
4 months ago
"There's no magic wand. A lot of it starts and finishes with hard work" - Ronan O'Gara
Next Page