What would hurling be without celebrating the good days?

Laois' year didn't begin overly smoothly. An almighty row in the county final had the camp wounded. Some players opted not to commit for the year because of it.

The League was up and down. Two losses to Galway and to Waterford kicked it off. Offaly were the only team they'd beat in five games and it was clear that Eddie Brennan had work to do.

The Kilkenny man got to work. Men like Ross King came back in and they began making quiet headway. They found their groove in the Joe McDonagh Cup, cleaning every team out of it with their blend of fast, natural hurling and ravenous defending.

Their final display against Westmeath was awesome. Laois were back in Leinster for 2020, that's huge for the county and it represented a big goal for the year achieved. 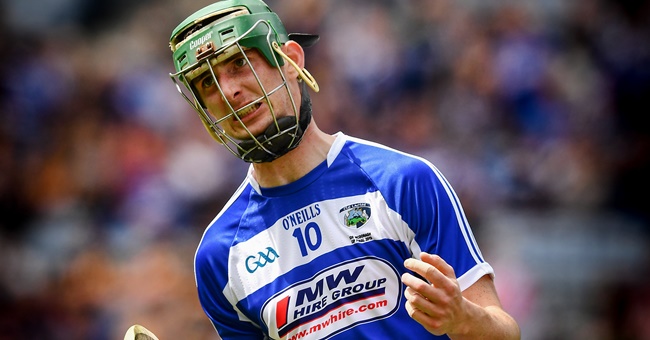 Misfortune, disregard, neglect - whatever you like to call it - had them in an All-Ireland preliminary quarter final just seven days later. That was the narrative anyway, they didn't see it like that.

"We saw this as a huge opportunity. This is the chance of a lifetime. We didn't read into the seven day turnaround," said captain Paddy Purcell to us after the game.

"We heard so many articles about it, lads feeling sorry for us, but we were looking forward to it all day boy. We enjoyed Sunday and Monday, but we wanted to get back and get working," he added.

The players' followed their captain's example. Key to that hunger, key to that drive and key to that high squad morale were Sunday's and Monday's celebrations. Manager Eddie Brennan spoke to us after the game and it's clear that he encouraged his squad to enjoy their Joe McDonagh Cup win.

"No problem and they enjoyed Monday as well but they came back in here Tuesday evening and not one of them grumbled or groaned. That was a sign for me that right, there is something here.

“I am getting a little bit of credit and I don’t want it. The players are ones that crossed the line, that drove it on. Our game plan is very very simple. We focus on being able to execute the skills of the game under pressure and under fatigue. They done that in abundance today when they needed to.”

"Eddie Brennan is some man. He’s going to be a hero of county Laois now!”

Laois' Enda Rowland on their barnstorming bainisteoir after the game pic.twitter.com/0pNglr1kA8

The former Dublin player and current Laois selector was in a strange position on Sunday, but he was singing off the same hymn sheet.

"They had a few pints Sunday night and they had a few more Monday, there was a bit of black smoke at training Tuesday and Wednesday," said Corcoran.

"I guess the question was posed to them was what was the group's ambition? Is it the Joe McDonagh Cup or do they want more for themselves? As a management group we saw the ability that they do have, huge hurling, they showed it there today, it was about the ambition and did they want to go a step further and I think they answered that there out on the pitch. I think it was just phenomenal and I'm so delighted for them."

By all accounts, the Laois hurlers celebrated Sunday's win the right way too.

Bring on Tipperary next weekend.


popular
"Conor Murray was hung out to dry"
Kilkenny youngster pulls off the no-look hand-pass once more
"Ireland don't ever do anything different and that's the worry" - Mike Tindall
Tyson Fury reveals what happened when he sparred Anthony Joshua
Jacob Stockdale and Johnny Sexton not spared by English press
Angel Gomes considering leaving Man United for European giants
Joe Rogan reveals the diet and training plan that keeps him so shredded
You may also like
1 week ago
"At the end of it, you're just saying, 'thank God I didn't block that ball down'"
1 week ago
The GAA Hour | Football | Jonny Cooper interview and David Gough clarifies
1 week ago
"You're still trying to get your one-rep max higher, and your fitness higher"
4 weeks ago
Tipperary make statement of intent with battling draw against Dublin
1 month ago
"I was thinking, 'Oh my God, how am I supposed to play beside them?'"
1 month ago
Two giants rise above the fray
Next Page