Paul Mannion's left foot was the difference between Kilmacud Crokes and Wolfe Tones in Páirc Tailteann on Sunday.

The three-time All-Star was in electrifying form for the Dublin champions, kicking scores whenever his side needed them in a performance that, from the start to the finish of this Leinster club football quarter final, showed Dublin all they're missing. Kilmacud Crokes certainly know how lucky they are to have him as, from his new centre forward base, Mannion orchestrated the play, he linked up well with his team-mates and most impressively, he kicked scores from miles out with the wand.

END_OF_DOCUMENT_TOKEN_TO_BE_REPLACED

In the form he was in here, the man is close to unplayable and for team-mates and supporters alike, it's a total joy to watch. In truth, that's the way it's been all year though and from the minute he swung over an early long-ranger off the left, Wolfe Tones must have known they were up against it. That's how good he is.

To the Meath champions credit, despite a rough start that had them 1-3 to 0-1 down after 14 minutes, they stuck to the plan and manager Michael McDermott surely liked what he saw when Cian Ward showed all his class and experience to set-up Cian O'Neill for a goal that dragged them back into this game.

You can't teach that 🙌

Cian Ward is rolling back the years in Páirc Tailteannpic.twitter.com/PSeuV77FRs

By that stage, with Thomas Reilly coming into it and with Conor Shepherd causing consternation with his rampaging runs from deep, Wolfe Tones were well in it but this game changed on moments. Most of them came from the eventual man-of-the-match Mannion who, as if blessed with a capacity for magic on request, turned on the style whenever the game needed it.

In fairness, right up until to the finish, it was an entertaining game to watch with both teams attacking with purpose and with pace. Cian Ward's 50th minute red card, for a high and mistimed tackle signalled the end for his side as Dara Purcell, Shane Cunningham and of course, that man Mannion finished the job for the travelling side.

Afterewards, Mannion spoke with Micheál Ó Domhnaill on TG4 when, with typical modesty and self depreciation, he played down the role he played in the win. Having scored 0-6, 0-5 from play, his football certainly did the talking there though. 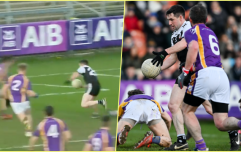 END_OF_DOCUMENT_TOKEN_TO_BE_REPLACED

"I wouldn't say it's freedom as such. But yeah, it's a different kind of game coming in on the end of plays, linking it and I suppose, when the opportunity presents itself, to burst through the gap and take a score. I missed a lot of chances today as well that put us under a lot of pressure."

Watch some of his scores below.

"It's been mentioned a few times 2018, that Leinster final, we came away from that really, really hurt. We made a lot of mistakes that day, that we'll hope to learn from down the line," he continued.

On the Crokes go to the semis now, where they'll be joined by Portarlington of Laois, Shelmaliers of Wexford and Naas from Kildare.

You may also like
1 week ago
Pauric Mahony gives advice on how GAA players can recover from ACL injuries
1 week ago
America produces the goods again with another gorgeous GAA jersey
1 week ago
Bríd Stack can't hold back tears as she is named to make AFWL debut after recovering from fractured neck
1 week ago
"I think you’re going to see inter-county players retiring at an earlier age" - Pauric Mahony on the demands of county training
1 week ago
"I've told the lads that I don't plan on it" - Paul Mannion speaks about his future with Dublin
1 week ago
"If only I knew that in my early 20s, I'd know a lot more." - O'Brien's advice worth heeding
Next Page