"I still get the odd free pint for it...'twas good times"

So in one corner you've Ken McGrath.

Skint head, scant teeth. A hurl will be banged off that table in a minute. Dan Shanahan, granite physique and expressive tattoos, strolls around the place like a man free.

John Mullane is dancing inside and out, his eyes would cut you in two and his head is wired to the moon. Tony Browne is cool and collected, a legend by the word's very definition. 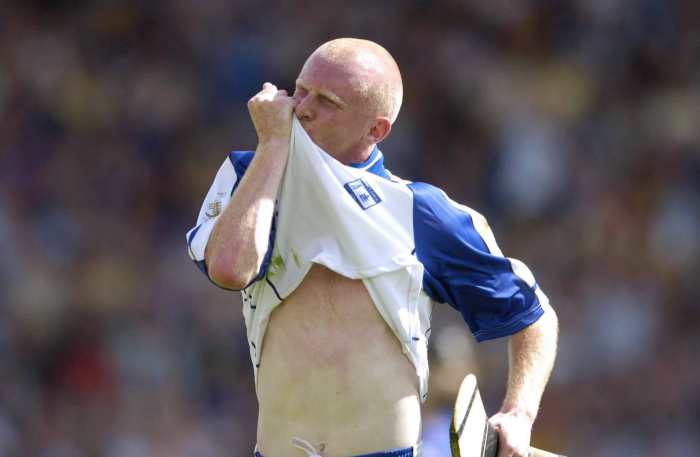 Paul Flynn, he was somewhere in the middle.

Couple of years on, he stops and smiles. The Waterford dressing room was a mad house in the early noughties, a pick and mix of all characters great and small, all personalities loud and unassuming but inside was a magical bunch; a magical bunch who caused a whirlwind wherever they went.

The memories come flooding back.

"Mullane, the anger in his face, Dan 6 ft 4, like a model with tattoos on his hand and then grabbing balls and hanging them in the net," recalls Flynn, a star of that Waterford team on Monday's GAA Hour Show.

"Ken at centre back - no teeth in him...You know, we used to have lads taking out their teeth in the dressing rooms and putting them in their pockets!

And the 2004 Munster hurling final was their day of days. The sun scorched over Thurles on a Sunday that had a near religious feel to it, as the people of Cork and Waterford travelled in their droves to hurling's own promised land.

END_OF_DOCUMENT_TOKEN_TO_BE_REPLACED

Their representatives didn't disappoint with a contest and a game that will live long, as TG4 viewers found out on Sunday, when the game was shown again to much fanfare.

Mullane's red card, Deane's majesty, Ken McGrath's catches all had the hair standing perhaps the most pulsating moment of all came when, Paul Flynn hammered one in from 40 yards to keep Waterford alive.

The magical, the mythical, the incredible Paul Flynn.

40 yards out? Sure I'll just roof it in the top cornerpic.twitter.com/QUAuihcVqO

Years of conjecture and debate has followed but speaking to Colm Parkinson, Paul Flynn notes that he and Dan Shanahan had spoken about the prospect of a long-range shot before.

"I have to go along with the public perception that I did, because at this stage, I still get the free odd pint over it so if I actually contradicted myself, that would stop.

"To not sound cock-of-the-hoop about it, myself and Dan did have a little thing in place where if Dan stood in front of the goalie that the odd day, we might try something. We tried it once or twice before, and two of them hit the cross-bar. Of course when one does go in, it was a mistake.

But Flynn had form for it. Known as one of the game's deadliest finishers, he could strike the ball at an almighty pace. The Ballygunner man looks back fondly.

"Funny enough, we used have a good bit of banter. Diarmuid O'Sullivan started pointing to the bottom corner...I just looked at him, shook my head and said 'no!' Even in the Munster hurling final, there was a good bit of craic going on between us..."

You can listen to the Paul Flynn Interview on The GAA Hour Show here.


popular
The 14 Irish players Down Under as TG4 come up with the goods once again
Roy Keane's first impression of Cristiano Ronaldo proved to be very accurate
The SportsJOE 12 o'clock quiz | Day 290
Jurgen Klopp chases Sean Dyche down Anfield tunnel after half-time fracas
Joe Rogan reveals he could be parting ways with the UFC
"I kind of decided on Hill 16, 'you're either going to do this or you're not going to do this.'"
Fernando Torres has got absolutely jacked since retiring from football
You may also like
1 week ago
"The divil you know is better than the divil you don't" - Larkin stands by Cody
2 weeks ago
"Is it curry or is it stew?" - Seamus Flanagan and a Limerick training session in November
1 month ago
"Cillian O'Connor, amazingly, didn't even flinch at what was said by Philly"
1 month ago
"It's going to be very hard to see anyone laying a glove on Limerick for a while" - JJ Delaney
1 month ago
"He isn't a flat track bully; he's the reason Mayo hammered them"
1 month ago
Mayo know what's required to beat Dublin... but it could get dicey
Next Page