"Look at this place! What it means to all of us!"

Padraig O'Hora was struggling to hear what Damian Lawlor was asking him, but he could not give a fiddlers. He was in a state of pure bliss.

The Mayo defender busted up a couple of ribs in the Connacht Final win over Galway and it was questionable, from that day to this evening, whether he would line out against Dublin in the All-Ireland semi-final.

END_OF_DOCUMENT_TOKEN_TO_BE_REPLACED

That he most definitely did, and he delivered a performance so effective and eye-catching that he edged out the likes of Lee Keegan, Robbie Hennelly, Tommy Conroy and Diarmuid O'Connor for Man of the Match.

Following the game, which Mayo won 0-17 to 0-13 after extra time, O'Hora was visibly emotional as he soaked up the scenes of sheer joy on the Croke Park pitch, and up in the stands.

"It's impossible to even put it into words," he started, before looking around him. "Look at this place! What it means to all of us! I can't even describe it. Just... unbelievable. The best day of my life.

"We love a battle!" he added. "We always seem to put ourselves at the bottom of the hill before we go climbing it.

"We knew what we needed to do. We put in the work all year. It's an outrageous squad. Everyone put in a shift, and we turned them over like we planned to."

Asked about the absence of Cillian O'Connor and Oisín Mullin, O'Hora returned to his previous comment about Mayo having a strong squad.

"We put in hard work, week-in, week-out, that you don't see. So when Oisín got hurt, someone else stepped up and that's what it's all about. This is a unit. It's not a group of individuals. It's a team."

Lawlor finished off with a long question about whether this Mayo team, full of up-and-coming players and others that have been there and missed out, had what it took to win the Sam Maguire. O'Hora nodded and took his place back behind the microphone.

"Absolutely," he said. "We have only one plan."

"Look at this place... it's the best day of my life" - An emotional Padraig O'Hora is named man of the match after an epic Mayo performance #RTEgaa pic.twitter.com/WlthukIWxD 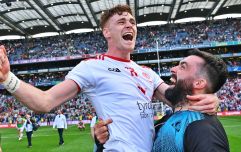 END_OF_DOCUMENT_TOKEN_TO_BE_REPLACED

Five words - We have only one plan. Padraig O'Hora and his teammates have one hurdle left.

An interview that sums up the maniacal obsession for All-Ireland glory - no matter the set-backs - that makes this Mayo story so compelling.

Even the staunchest of Dublin supporters would find it hard to take anything away from the lad after such a superb performance, and interview.


popular
Shane Lowry had no problem setting reporters straight at Ryder Cup briefing
Rob Kearney taught a classic GAA lesson when he tried to have the craic in second game back
The scenes in Newbridge as the biggest hit and hope ever knocks Moorefield out
When Liam Brady lit into Brian Clough for his dismissive Mick McCarthy comments
Kieran McGeary on his relationship with Mickey Harte and his role in Tyrone's success this year
How one text message a teammate sent Kieran McGeary proves that Tyrone's success was a team effort
"I just knew that Karen was going to be there with us... I absolutely adored her" - Maeve Kelly
You may also like
2 hours ago
'Solskjaer has started the new season the same, so why would you expect a different result?"
4 hours ago
Premier League clubs agree on calendar ahead of 2022 World Cup
7 hours ago
Pep Guardiola renews calls for U23 sides in lower leagues after win over Wycombe Wanderers
1 day ago
Cristiano Ronaldo reportedly rejected by Atletico before sealing Man United return
1 day ago
Lionel Messi has knee injury, Paris Saint-Germain confirm
1 day ago
David Beckham tells Inter Miami boss Phil Neville to be 'particularly hard' on son Romeo
Next Page