"He is now one of the most feared forwards in Ireland"

Owen Mulligan is liking what he sees.

Tyrone coasting through the qualifiers and bringing that form into the Super 8s too. Their weekend victory over Roscommon was the Red Hand at their very best.

Tight in defence and efficient in attack, Roscommon were there or thereabouts but they never really looked like kicking onto win that game.

Tyrone are the masters are controlling a game and sucking the life out of the opposition. Key players like Conor Cox and Cathal Cregg didn't end up getting much change out of that Tyrone rearguard. Ronan McNamee for one, was unbeatable and he reduced Cox to mere scraps while Colm Cavanagh's sweeping worked a treat.

In attack it was all about the twin threat. Peter Harte and Cathal McShane. After fearing he could miss out due to suspension, Errigal Ciarán club man Harte ran the game from half forward. His passing was precise, his direct-running threatening and his movement was brilliant.

On his Paddy Power News column, Tyrone legend Owen Mulligan praised Harte and his contribution to the team.2

"Peter Harte is the key man for Tyrone. It is so vital to have him fully fit and suspension free," wrote Mugsy. 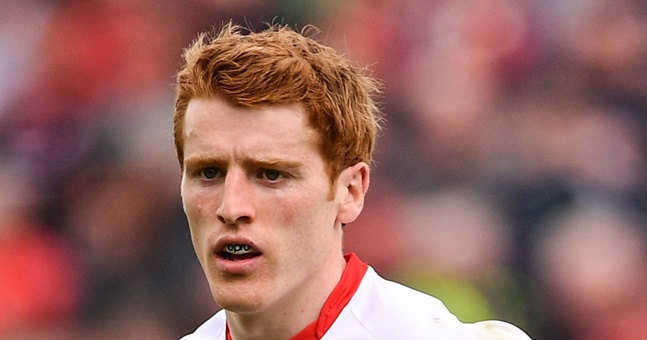 "There is no doubt that other teams realise this and if you can keep him quiet, you’ll go a long way to getting a result against The Red Hands.

"Harte controlled the game on Saturday pulling the strings and interlinking with McShane. He sees things before anyone else, leaving him one step ahead constantly. He committed in the tackle and helped his backline out on several occasions by getting in some last-ditch tackles.

END_OF_DOCUMENT_TOKEN_TO_BE_REPLACED

As for McShane, Mugsy outlined his growing importance to the Tyrone machine.

"For years Tyrone have lacked a man that can win his own ball, both on the ground and aerially. With a strong physical presence and direct running at the edge of the square, McShane is now one of the most feared forwards in Ireland.

"His vision to bring other players into the game has reaped rewards for Tyrone on the scoreboard, but his own finishing has also improved vastly from last year. We are looking at a possible Tyrone full-forward All-star if he keeps shining the way he is.

McShane with 2-36 to his name, is the top scorer in the 2019 All-Ireland senior football championship, more than eight points clear of his nearest rival Adam Tyrrell from Kidlare.


popular
The SportsJOE 12 o'clock quiz | Day 143
SportsJOE 2000s Football Quiz | Round 12
Brooks Koepka puts PGA Championship leaders on notice with final round comments
Rory McIlroy defends Dustin Johnson after Brooks Koepka comments
Collin Morikawa makes huge world rankings leap as Lowry drops back
Only a Champions League fanatic would get full marks in this quiz
Robin McBryde on training session that sent message to Leinster's international stars
You may also like
4 months ago
"I went out at 18, straight from school and that breaks many players"
5 months ago
"That's not just handbags, there is a lot of really serious punches being thrown"
5 months ago
Monumental wind causes havoc in Healy Park for Dublin v Tyrone
6 months ago
Mickey Harte and Tyrone revitalised as McShane stays put
9 months ago
Trillick show their class after Brennan's missed penalty
11 months ago
"It dilutes your focus, it's very beneficial to get away from social media"
Next Page