Monaghan get black card, throw every man behind ball, Tyrone refuse to attack them for 3 minutes

Tyrone haven't gone away, you know.

Beware the results and performances of the first three league games because nobody gives a shit about them come the summer.

Tyrone had just one point from a possible six in their opening rounds but the two-week break has seen them completely and utterly transform from the flat, predictable team of January into that vicious, organised and dynamic animal that forced them into the top four bracket.

Monaghan went to Healy Park on Saturday and got eaten up by a hungry home side who recorded their first win of the season with sheer intensity in defence and break-neck pace in attack.

1-16 to 0-12 was the final score in Omagh, the goal a piece of brilliance from Peter Harte - his run and his finish - but a pair of deft, cheeky hands from Richie Donnelly made it all possible.

Oh baby, check out those soft Richard Donnelly hands as he palms off for Peter Harte's goal 🤤pic.twitter.com/7UV28QxOMO

Tyrone were on it for this fixture and one of Cathal McShane's scores encapsulated the difference in them from two weeks ago. Ben McDonnell rose high to pluck a Rory Beggan free from the skies inside the Tyrone square. Within seconds, the red jerseys had washed upfield like Moses himself was parting the sea and McShane finished off an unstoppably sweeping move.

But, by the 33rd minute, that pace and vigour was completely taken out of the game when Dessie Ward was issued a black card for Monaghan.

Malachy O'Rourke reacted like other teams have already done to the sin bin by lumping every single player - bar none - behind the ball and what unfolded was a bit of a farcical three minutes for the 5,800 in attendance.

Every single Monaghan player drops in behind their own 65'. 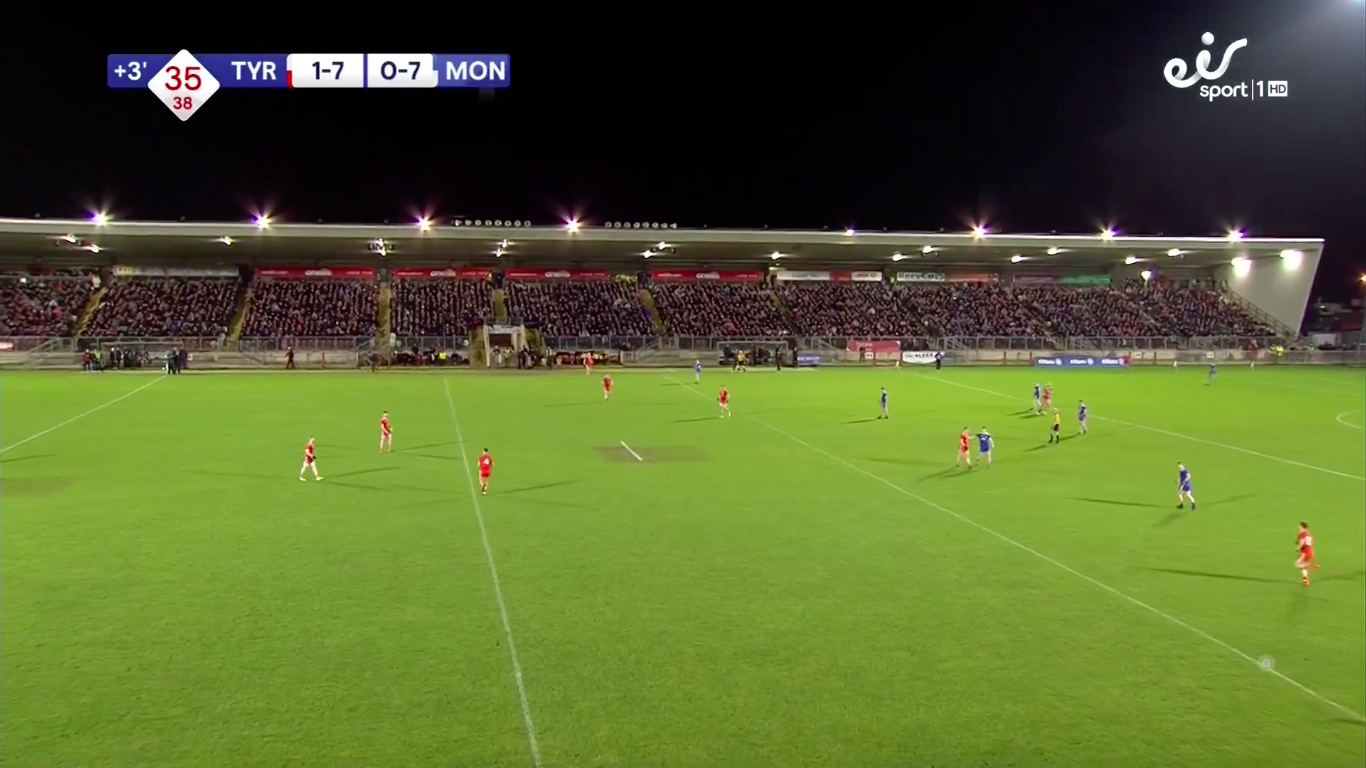 Tyrone decide that they won't be stupid enough to walk into that wall - especially with the three-point advantage. 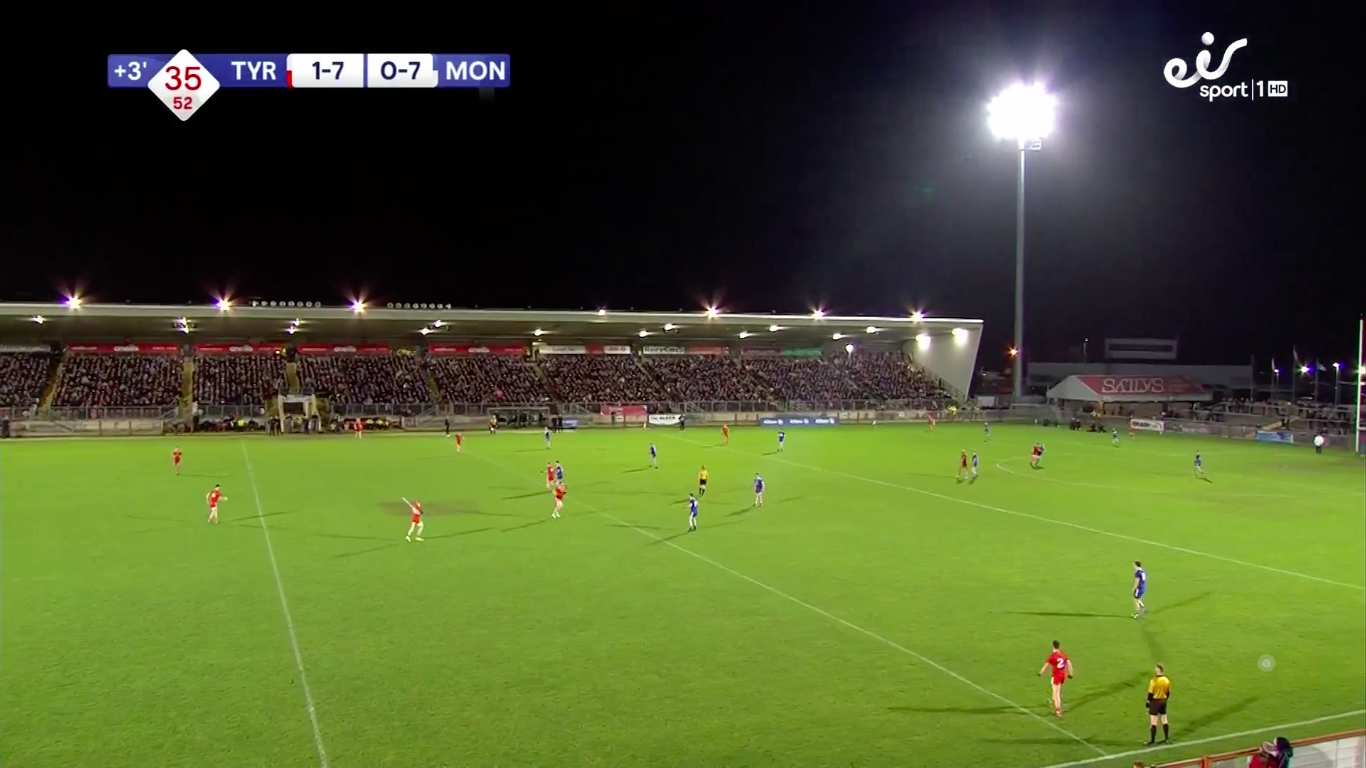 So they just kicked the ball around under absolutely no pressure in their own half and the crowd grew restless.

Tyrone tried to advance but knew they'd be drawing contact. So Niall Morgan himself arrived to help. 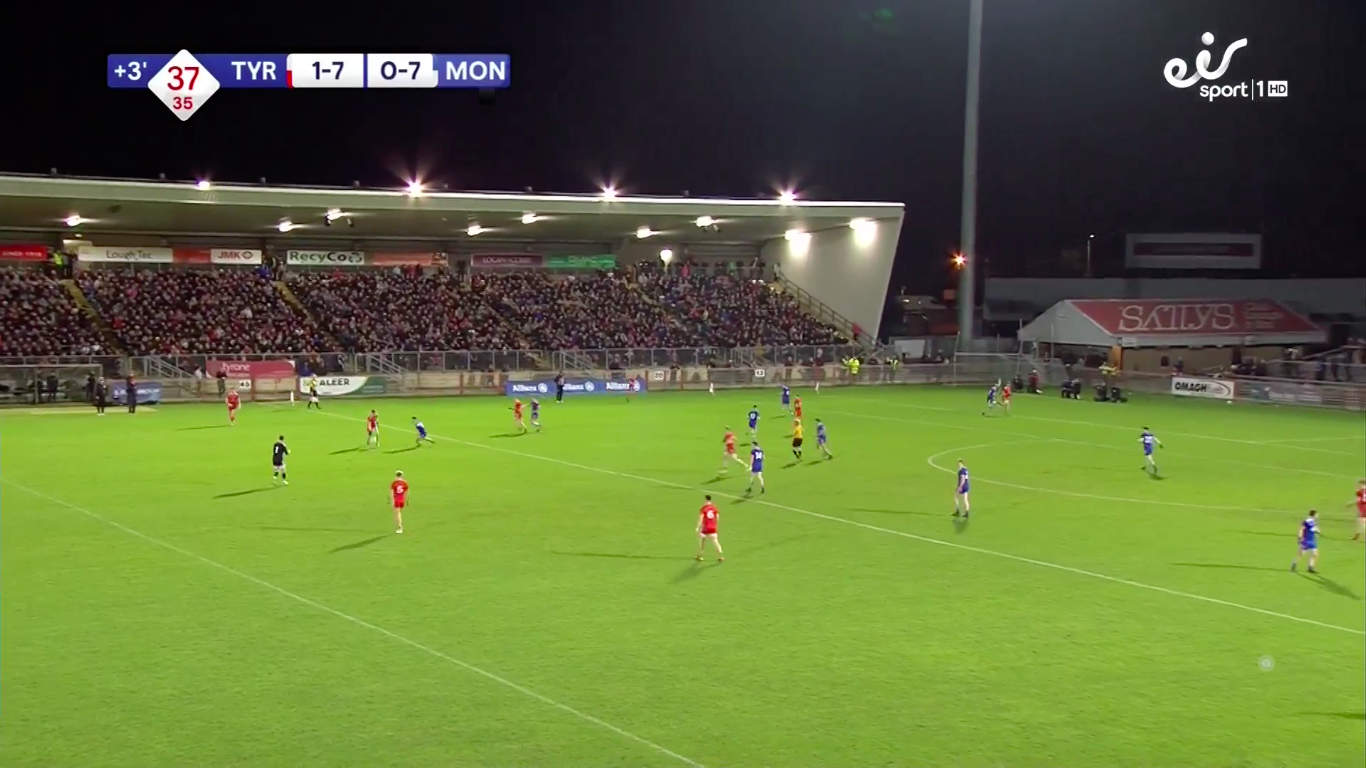 Every single player on the pitch - 29 of them - were inside the Monaghan 65' and Tyrone kept the ball there. 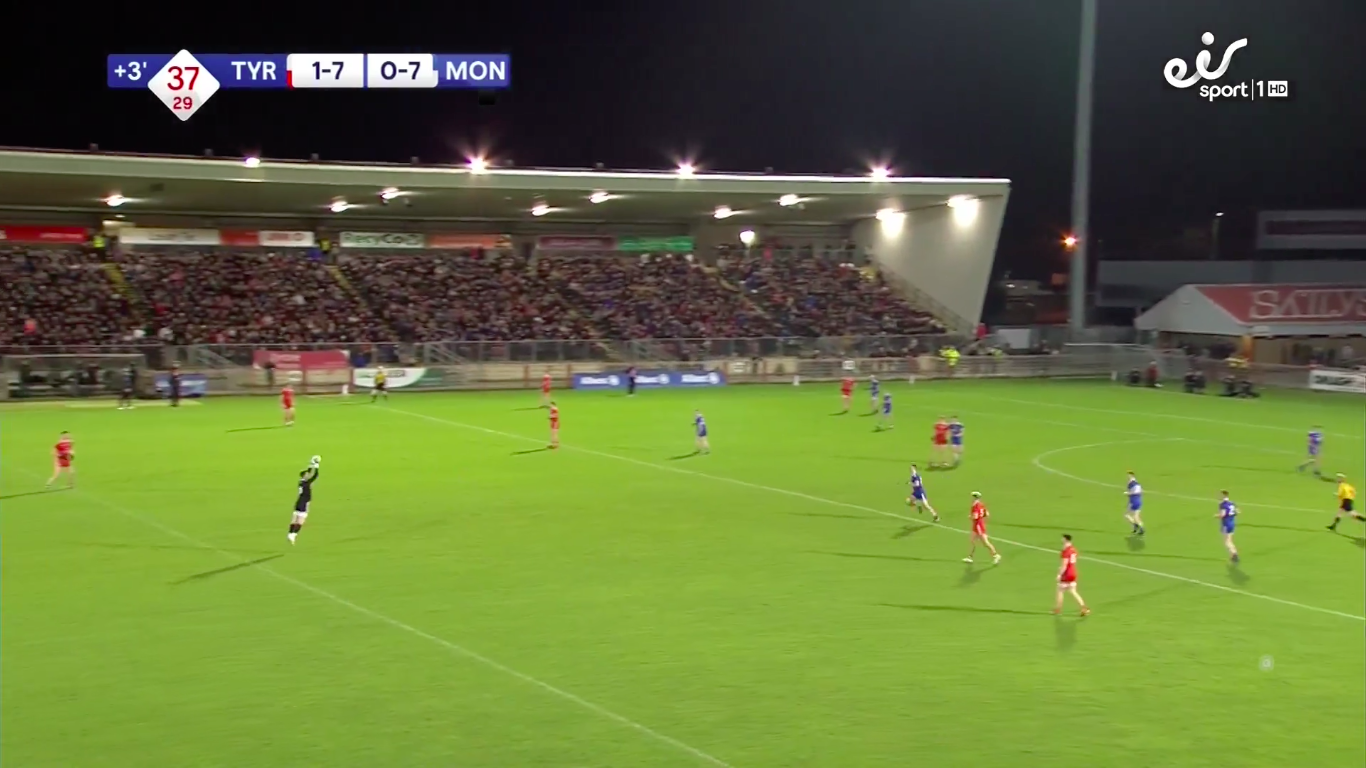 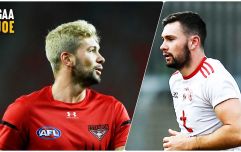 "Just to get that Tyrone jersey on my back and playing with the lads, it has been amazing."

END_OF_DOCUMENT_TOKEN_TO_BE_REPLACED

Tyrone eventually got a way through - taking risks with all the bodies there - but McShane ballooned an effort wide. It took three minutes though for that bit of action and then the half time whistle blew much to the relief of the crowd.

At one point, the camera flashed to the Tyrone dugout. Mickey Harte was motionless - he's not going to tell his players to willingly surrender themselves to the blanket but Stephen O'Neill was in the background shaking his head, presumably exasperated at Monaghan's tactic during that sin bin spell.

It's difficult to stop teams who want to play so defensively - even just for a brief period like Monaghan - and, in truth, they should be allowed to be defensive, like every sport allows for. But you can incentivise them to come out by introducing a back-court rule into Gaelic football.

Every time the ball crosses a line in your own half, you can't go back inside it.

Once you're outside the 13, you can't go back there. Same for 20, 45, 65 until you cross half way line and you have to stay in the opposition half. pic.twitter.com/R5X4tMHUSW

That wouldn't punish the team on the ball - Tyrone weren't at fault for what happened on Saturday. As the game showed, there is still comfortably enough space inside the opposition half to keep possession if that's what you want to or have to do, but a team might like the chances of pushing up or pushing you back and, suddenly, you'd have a new dynamic.

Another reason for Tyrone's caution with the ball is because they know what would happen if they give it up. Monaghan would've kept it and ran the clock down until they were back to their full compliment. The back-court rule would make it tougher to keep the ball - a pitch is too vast for it to really be a skill to appreciate. But if a team wants to keep possession - and they should be allowed to do that too if they really want - this just makes it more of a skill to be appreciated. And it might encourage some teams to push out because they could be handsomely rewarded if successful.


popular
"There were some tough battles but I was happy to test myself against the best"
QUIZ: Name the clubs to have lost in every Champions League final
Chris Barrett's tackle stats against Dublin are unprecedented
QUIZ: Can you name the Football Italia cult heroes? | Part 2
"The divil you know is better than the divil you don't" - Larkin stands by Cody
Teammates XI Quiz: Liverpool – 2005 Champions League Final
QUIZ: Name the Man United XI from the last time they led after 17 games

You may also like
2 months ago
"Conor McKenna is a better addition to Tyrone than what Tadhg Kennelly was to Kerry"
4 months ago
GAA voices need to make more noise in fight against disjointed restrictions
4 months ago
Donnelly back with a bang as Trillick win the shoot-out
8 months ago
No club football for nine years but Canavan was always going to make it work
9 months ago
"I went out at 18, straight from school and that breaks many players"
10 months ago
"That's not just handbags, there is a lot of really serious punches being thrown"
Next Page