Ciara Butler looks around but there's nothing doing.

Not even the faintest little thing. Where do we go from here? 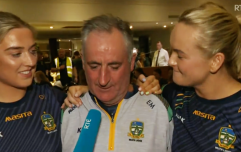 END_OF_DOCUMENT_TOKEN_TO_BE_REPLACED

Her joint-managers can't help her out with that one because, on the line, and even from a distance, the view is no better for Darragh Long or Declan Quill.

Meath are known for pushing up on opposition kick-outs - it was how they smothered the life out of Donegal in the semi-final - but even for them, this is impressive and even by their standards, this is something special. It's more like a tidal wave.

For a finish, she can't hold onto it forever, Butler just hits and hopes down the middle but nothing new here, Meath are ready, waiting and like sharks in the water, you just know they're going to pounce. Emma Duggan has had a fairly quiet game by her standards but she does very well here and it's no surprise to see that, by the time she's intercepted the kick-out, Kerry are in for it now, she's already eyeing up the perfect pass.

Bridgetta Lynch runs onto it, Stacey Grimes runs off the shoulder and then, like clock-work, Niamh O'Sullivan arrives to palm it home. Game, set and there's no doubt about it, five points up with 15 minutes to go, that's the match now.

Meath increase their lead to five, is there any way back for Kerry now? #ProperFan

END_OF_DOCUMENT_TOKEN_TO_BE_REPLACED

Meath were never going to lose it from there.

Still, it was far from a procession and it would have rattled many teams, certainly lesser teams, if they found themselves four points down with the national anthem still ringing in their ears. But Meath are champs for a reason, and Niamh O'Sullivan gave that reason away in her post-match interview.

"Us Meath women know how to stand up and fight," she said defiantly.

END_OF_DOCUMENT_TOKEN_TO_BE_REPLACED

At 31, and as the team's beating heart, all energy and skill and dainty feet in the corner, O'Sullivan knows all about that but Meath have fighters all over this team. For someone who's sweet as sugar in interviews, Vikki Wall is one fiery lady on the pitch.

Ciara Murphy was given the unenviable job of picking her up from the start and right at the start, as she horsed into her at the throw-in, Wall let Murphy know that this was going to be one of those days.

The Dunboyne player's day - and indeed her Meath career for the time being - ended when she was black carded with eight minutes to go but even then, with the victory in the bag, the AFL-bound-player was still hyped-up as ever. The official who ushered her towards the dug-out wasn't given too much hop on the way off.

The job was already done at that stage though and a couple of minutes later, when the camera panned to the Meath bench, and when a smile broke out across her face, it was a sign to those loyal Royal supporters that it was party-time now. Wall's mettle is a key part of their team, and that's why, when she came up on the big screen, they let out a roar that would almost deafen you.

It takes a good team to win one, it takes a great team to win two. Wall will head to Australia content in the knowledge that she has gone out at the very top.

Wall and O'Sullivan played key roles in securing that win but nobody, from one to 15, made as many inroads into that Kerry defence as Meath's Duracell bunny in the half-back line. They haven't seen an engine like Aoibhín Cleary's in the Mercedes HQ in Germany.

The Donaghmore Ashbourne player is one of the best movers in Gaelic football and for the game that Meath play, full of energy and ball-carrying, Cleary is their go-to woman. She breezes past tacklers like they're not even there and on the biggest stage of all, against the best players in the country, it's no exaggeration to say that she was in a League of her own.

A class apart from the rest.

Kerry will have better days and, when the dust settles, they'll surely look back on this season with great pride - Síofra O'Shea and Louise Ní Mhuircheartaigh would make it into any team in the country - but this was Meath's day.

And what a day it was.

You may also like
1 month ago
Emma Duggan saves Meath with outrageous buzzer-beater in All-Ireland quarter final
2 months ago
“Monaghan had 15 players behind the ball and only for Stacey on the frees, it was awful to watch." - Murray calls a spade a spade after awful game
2 months ago
Outstanding Goldrick gives Dublin the bragging rights against Meath
2 months ago
“You don’t want people thinking that it was a one-time thing" - McGuirk gunning for more glory
4 months ago
"There’s no problem, they’d train seven nights a week if you asked them." - Meath are no flash in the pan
4 months ago
Niamh O'Sullivan gives a lesson in forward play with genius movement for Meath goal
Next Page