"I would have loved to have started.

"All you've ever dreamt of is the 15 players going around for the parade..."

Teenage sensation, Munster champion, All-Star. Shane Dowling hadn't a clue what it was like to sit on the bench, until 2018.

From the next big thing under John Allen to the free-taking fulcrum under Donal O'Grady, the periphery was a strange place for Dowling, who knew nothing other than being Limerick's main man.

But in 2018, Na Piarsaigh's club run brought them to St Patrick's day and in the meantime, Limerick's youngsters copper-fastened their places on the team.

Thanks for inspiring the country, @dowlerznap.

Gillane took over the frees and John Kiely had settled on his first fifteen. For Dowling, a player in the prime of his life at 26, it was a bitter pill to swallow and on All-Ireland final day, the disappointment of being dropped to the bench really hit home.

"Even the whole Michael D thing," he said after the 2018 final on The GAA Hour, "I went into the dressing room, into the bathroom. I wanted to stay away from it to get my own head right.

"All this circus going on outside, I just went away from it. I didn't want that negative stuff, to be feeling sorry for myself...it was just to leave whatever disappointment, fire it into the sink and get back out."

True colours are revealed in times of adversity though and Dowling proved a team player. Indeed, most Limerick fans would agree now that the Treaty wouldn't have won that All-Ireland were it not for Shane Dowling's influence. 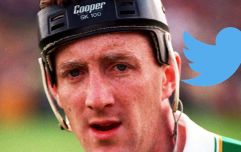 END_OF_DOCUMENT_TOKEN_TO_BE_REPLACED

In the final itself, he got his just reward when skilfully dispatching the winning goal that left Galway reeling and eventually defeated.

But his impact stretched the whole year, having come off the bench to shoot 1-4 and tip the balance in his county's favour in their extra-time semi-final win over Cork. While not making the starting 15 clearly devastated the sharpshooter, the fact that he kept spirits high and standards higher is something that the people of Limerick will always appreciate.

Thursday morning's news that Dowling has been forced into an early retirement due to persistent knee problems is a blow not just to his county, but to the game of hurling in general.

He wasn't fast, he may not have been the fittest but Shane Dowling possessed the type of gold carat skill that very few players are blessed with. From his time as an under-21, he could puck the ball a country mile and right through his career those Rolex wrists did things that most hurlers could only dream of.

Come 2019, there were kids all over attempting the 'Shane Dowling.'

There aren't many hurlers who could score a goal like this.

Shane Dowling of @NapGAA will be sorely, sorely missed 🟢pic.twitter.com/OHPm2ya4xE

In the Na Piarsaigh colours, he always made that ball sing.

And so in times of upset or regret at a career cut short, Shane Dowling can always ask himself whether it would have been better just march behind the band, or to score the winning goal on All-Ireland final day. He came out the right side of that one.


popular
Conor McGregor wants immediate Dustin Poirier rematch, for UFC title
QUIZ: Name every Chelsea manager hired by Roman Abramovich
SportsJOE 2000s Football Quiz | Round 20
The SportsJOE 12 o'clock quiz | Day 293
Quigley's shot from heaven is worth a year without hurling
"It’s an easier life in goal, you’re not waiting for some fella to give you a box in the jaw"
Lady Gaga will perform Satanic ritual during Super Bowl halftime show, according to conspiracy theorist

You may also like
1 week ago
Limerick dominate All Star nominations with fair Hurler of the Year spread
2 weeks ago
"Is it curry or is it stew?" - Seamus Flanagan and a Limerick training session in November
1 month ago
"It's going to be very hard to see anyone laying a glove on Limerick for a while" - JJ Delaney
1 month ago
GAA JOE All-Star hurling team
1 month ago
You may write the weekend off with no fewer than 11 GAA games LIVE on TV
1 month ago
"There's no nonsense with this team, they're just going out there and playing the game"
Next Page