"When legs are gone and cramps are in, it's just about your head and your heart..."

2014 was their last Connacht minor final win. You'd nearly have to go back that far to find the last time they'd beaten Galway. At any level.

That's because prior to this famous Electric Ireland Connacht minor final win in Tuam Stadium, Galway had won 14 of the county's last 14 meetings at all levels from senior down to minor.

Mayo needed a response in this grudge game. And that's exactly Tomas Morley got from his under-17s. In a balmy evening in west Galway, the two teams went at it long into the night in a tit-for-tat, point for point thriller. 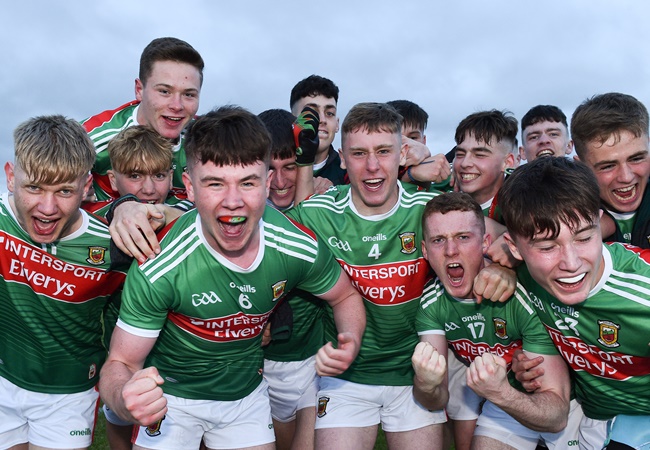 Eventually, the game would turn on a well-taken goal. With nothing between them after an hour of football, on they went to extra-time where Galway's nippy start looked like it would be enough. Four points up and with the clock ticking, their names were almost etched on the cup.

Dylan McLaughlin hit back. So did Paul Walsh. Then came the penalty and the nerveless Frank Irwin made no mistake lashing it into the top corner.

Speaking to Oisin Langan on The Electric Ireland TG4 sport stream after the game, their manager Morley paid tribute to the team's character.

"My over-riding feeling at the moment is just pure pride in them," he said.

"Into extra-time and four points down, these guys could have folded up but they didn't.

"Lads who were questioned about their character, as to whether they wanted enough, by me as well, and then that they went on actually did it. It's brilliant..."

"Every time we got a big score, they responded. I think in the last ten minutes of extra-time, we won midfield - when Galway had a much vaunted midfield pairing. It was just pure determination. When legs are gone and cramps are in, it's just about your head and your heart...Galway will feel sick, but when we needed it, we pulled away with character..."

This will be some inspiration for the men and ladies who go to war against the Tribesmen in a double-header in Limerick on Saturday evening.

"Hopefully the rest of the teams for the next week or so push on now...The perception is that Mayo can't dig it out when it gets to a final and that's why I'm delighted, that they dug it out as they did..."

END_OF_DOCUMENT_TOKEN_TO_BE_REPLACED

Former Galway All-Ireland winner Sean Ó Domhnaill was speaking on the TG4 stream, and he picked out a couple of players for particular praise.

Rory Morrin, the Ballina Stephenite who came on as a sub and made all the difference. He kicked two points, but his pace, power and ability to run straight through Galway men was huge in turning this game.

He mightn't have started, but this powerful young @NaStiofanaigh youngster made some difference for Mayo last night

Some pace and power for a 17-year-old

Some going from Rory Morrinpic.twitter.com/DJ8zv3Vln9

"We must talk about Rory Morrin. Ethan Fiorentini was having his own in that first 20 minutes but then when Rory Morrin came in, he was taken out of it. When they needed something up in the danger area there, he was the man," said Ó Domhnaill.

So too did Ruairi King, scorer of the point that raises the bar for full backs all over.

So this is what's expected from full backs now...

"We must also look at the Galway full back as well, Ruairi King, he was colossal back there..."


popular
"Conor Murray was hung out to dry"
Kilkenny youngster pulls off the no-look hand-pass once more
"Ireland don't ever do anything different and that's the worry" - Mike Tindall
Tyson Fury's official purse for Deontay Wilder fight revealed
Conor McGregor prepared to risk it all on next fight
Tyson Fury reveals what happened when he sparred Anthony Joshua
"If Murray is playing that first half for England, he's probably Man of the Match"
You may also like
1 month ago
"Growing up, I would always have been naturally fit"
2 months ago
Mayo confirm cult hero Ciaran McDonald has joined their coaching staff
4 months ago
"I was slow, I was never a David Clifford finisher" - Moran's modesty a genuine thing
4 months ago
"You've to work, pay bills, you've to deal with these massive changes" - former AFL star driving his club on
5 months ago
GAA JOE club team of the weekend
5 months ago
Dublin City traffic is bad, but the motorways don't get any shorter
Next Page