Killian Spillane shows what he's made of on day of reckoning

Killian Spillane has spent a long time waiting in the wings.

Wonderful beginnings toiled and he met a few bumps in the road. Down in Kerry, they're not that patient though.

He got a couple of chances but couldn't nail 13 or 15 down. Early substitutions and late introductions were the name of the game. His first taste of senior inter-county football wasn't all that pleasant.

But this is a fella who's made of sterner stuff. A son of Tom and a nephew of the great Pat, it's in his genes to kick scores for the Kingdom, it was only a matter of time before he let them all know about it.

And on the first Sunday of September 2019, the 23-year-old (yes, he's still only 23) experienced a coming of age. The question marks will disappear now because this fella is ready to take off.

Named to start, he was the one to lose out for Jack Barry but he was going to make an impact whether he was starting or not. And when his county needed him most, Killian stepped up with a contribution they all knew he was capable of.

A goal to keep Kerry alive when they looked lifeless. It was no ordinary net-bulger. It was total football, Kerry football at its most beautiful, free-flowing best.

Tommy Walsh did well to wrestle the ball away from Davy Byrne's grasp. Killian Spillane was gone running. Walsh gave it to him where he wanted it and Spillane stretched those long legs.

The bounce was perfect. It was one of those hops thrown down with purpose. It pulled Spillane along with it for five metres. He had Brian Howard, master of the sidestep in an unfamiliar spin and then he let rip with the golden gun. Nestled in the bottom corner.

That is the way you finish them

Killian Spillane of @Templenoeabu pure ice and now we have a game pic.twitter.com/FGirANmVyE

"His movement ah, Killian is a very, very skilful player. Absolutely brilliant player, this was class because he had very little of an angle. He can kick left and right, went left this time. It was absolutely unstoppable," said uncle Pat on The Sunday Game afterwards.

"He was a brilliant minor but he never became the senior he should have been, he was magnificent and you'd have to be proud, a nice moment," he continued.

END_OF_DOCUMENT_TOKEN_TO_BE_REPLACED

That goal got them up off the canvas and within two points of the invincibles. Suddenly, the green and gold were roaring in Croker as this game took off.

A point seconds later to turn the screw on a weary looking Dublin team. His left reminded you of Gooch in his pomp and now Spillane looks a cert to start the replay.

It took him a long time to realise just how good he can be but now Killian Spillane is well on his way. You'd have to go back five years to when he kicked five points in the All-Ireland minor final to help Kerry to their first under 18 win in 20 years. 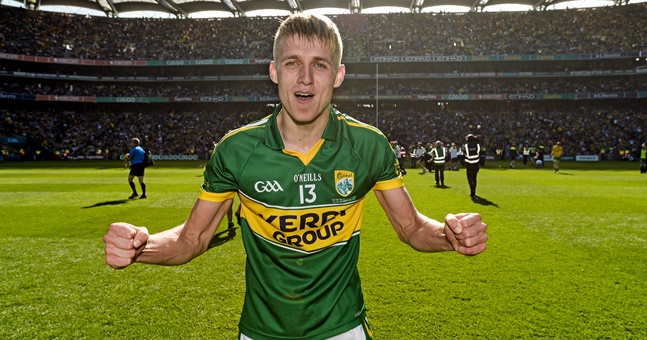 This fella is a clutch player and we'd better start getting used to him.

popular
The SportsJOE 12 o'clock quiz | Day 142
SportsJOE 2000s Football Quiz | Round 12
Robin McBryde on training session that sent message to Leinster's international stars
Rory McIlroy defends Dustin Johnson after Brooks Koepka comments
Collin Morikawa makes huge world rankings leap as Lowry drops back
Only a Champions League fanatic would get full marks in this quiz
Brooks Koepka puts PGA Championship leaders on notice with final round comments
You may also like
1 month ago
"He was a nightmare to play against...you were just a sitting duck"
3 months ago
Closed doors no issue for O'Brien
4 months ago
"I'd play 18 holes of Pitch n Putt" - Jack O'Shea's All-Ireland final prep pure class
4 months ago
St Patrick's day memories: Rural Caltra with one of the great underdog triumphs
5 months ago
"I was kind of going 'I'm not a Kerry player" - Donaghy's story a brilliant watch
5 months ago
Mayo issue update on crunch Allianz Leagues clash with Kerry
Next Page