The Kilkenny minor championship begins on Monday night. One team are still in limbo.

With both clubs struggling for numbers at the start of the year, Slieverue and the Blacks and Whites were granted permission by the Kilkenny county board to form an amalgamation.

This came with the stipulation however, that the team would be allowed to play in the League and not in the championship. The affected clubs maintain that this restriction 'goes against the ethos of the GAA and that championship competition should be available to them, as is being afforded to other amalgamations within the county.'

Indeed, the Slieverue and Blacks and Whites amalgamation side played against a Galmoy/Windgap combined team recently in a challenge game and while their opponents (an amalgamation side for ten years) are allowed to play in the championship, it appears the newly formed side will be prohibited from playing.

Members of the clubs have contacted representatives of the Kilkenny county board and the Leinster board but claim they are yet to receive a satisfactory explanation as to why they're being omitted.

The club issued a statement here. 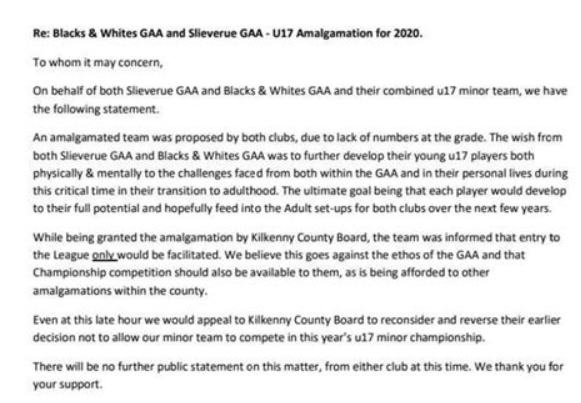 SportsJOE contacted the Kilkenny county board but are yet to receive a response.

popular
The SportsJOE 12 o'clock quiz | Day 186
Only old-school fans will get 20/20 in this 1990s footballers quiz | Part 2
Tottenham open talks for Inter's Milan Skriniar
QUIZ: Identify the football club from these 12 crests
Rio Ferdinand story about Dwight Yorke conversation shows Alex Ferguson's ruthless streak
The SportsJOE 12 o'clock quiz | Day 185
Sam Bennett's green jersey masterclass got Lance Armstrong talking
You may also like
1 week ago
"My own mother would go to three games on Saturday, three games on Sunday"
1 week ago
"There was only one puck after that, straight down on top of JJ, JJ caught it and that was it"
1 month ago
A team of hurling legends who didn't make their county minor teams
2 months ago
"I stay behind most evenings and I do that extra bit" - TJ's obsession
4 months ago
JJ Delaney tribute: A hurling legend made of different stuff
4 months ago
"Hurling is like a wardrobe, whatever you put into it you’ll get back out of it" - Life at St Kieran's
Next Page