Kieran Donaghy: From getting brought off in a Junior C match to becoming a Kerry legend

Kieran Donaghy was this close to jacking in the football.

Fellas were calling him a waste of space, he was feeling too much pressure in that environment, he wasn't performing and, to top it all off, he was actually a star on the basketball court. 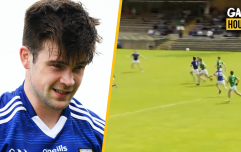 END_OF_DOCUMENT_TOKEN_TO_BE_REPLACED

The Kerry legend's new book, 'Kieran Donaghy: What do you think of that' has been released and it tells the remarkable story of a remarkable journey of one underrated Austin Stacks man who might never have gotten the chance to roar down the lens at Joe Brolly if he had listened to his doubters.

In 2016, the All-Ireland winner - who retired today with a beautiful poem - sat down with Colm Parkinson for SportsJOE's GAA Hour and recounted one under-16 loss as a bleak example; a time that saw him come face to face with one of his biggest critics.

Whilst him and his mates sat feeling sorry for themselves playing Pro Evolution Soccer and Donaghy was still reeling from the mistake that cost Stacks the game, his friend's dad came in and let rip.

By that stage, he was captain of the Ireland basketball team and ready to just focus on that. But the rise has been extraordinary.

Even now though, he's humble about his skills.

"I've always been the man who wins the ball and gives it off. Even my scores have come more out of necessity than choice. I never really took a shot unless I was pretty sure I was going to score."

Listen to his fascinating experiences silencing the critics the whole way throughout his career on The GAA Hour below (from around the 19:00 mark). This really is an inspiring story.


popular
QUIZ: How many of the 10 most successful football counties can you name without making a mistake?
Conor McGregor and Floyd Mayweather 'in talks' about a rematch
Éamonn Fitzmaurice explains Aidan O'Shea's best position and how it can be used against Kerry
Matt Le Tissier says he asked Sky Sports why they never sacked Jamie Carragher
Patrick Vieira claims he was 'much better' than Roy Keane in new interview
Steve McClaren issues warning to Man United players
You'll have to be red-hot to get 20/20 in this 2010s footballers quiz
You may also like
1 month ago
"Jesus, no, if he finds out, he'll think I'm going soft now." - the social life of inter-county GAA players
1 month ago
"It's becoming nearly embarrassing watching hurling at the minute" - Calls for hand-pass rule change in hurling
1 month ago
"You'd nearly want a telescopic loader to try and stop him." - Duggan back with a bang
1 month ago
"I've went through the appeals system four times, it's farcical" - Eamon McGee explains what's wrong with the CCCC
2 months ago
"People are savaged and you'll be saying to each other, 'we'll never do that again.'" - tough video-analysis for Galway
2 months ago
"The Aussies were brutal, they'd call you all sorts of names" - Hanley on sledging in the GAA
Next Page