Kevin Cassidy should be cherished and here's why.

Was he a wing back or was he a full forward? Over the course of a glittering 20 year career, he was both. You'd have to go a long way to find another two-time All-Star half back that inspired their club to provincial glory from full forward. Whatever Cass was, he was a bloody good footballer and as Eamon McGee so perfectly puts it in his clubmate's upcoming TG4 Laochra Gael tribute show, nothing 'changes the fact that he was one of the best footballers in the country.'

What makes that reputation all the more remarkable is that for the first nine years of his life, he lived in another country, grew up in another culture. Is he Scottish or is he Irish? Truth be told, he's a bit of both and he could talk to you all day about growing up in Glasgow just like he could about making a name for himself from the marvellous hills of Gaoth Dobhair.

Cassidy infamously missed out on an All-Ireland medal in 2012 but the 'what if' question doesn't drag him down. He'll say something like 'that's life,' and with a shrug of the shoulders and a cheerful face, move on. What's the point in bemoaning the past when you can't change it?

That Cassidy made it despite losing his father as a teenager sums up the different kind of stuff the Donegal man is made of. Kevin Cassidy should be cherished, because there aren't many out there like him.

On that Laochra Gael programme which airs on TG4 this Thursday night at 9.30, Cassidy bears all. He talks about all the events - some heart-filling, some heart-breaking in a documentary that gives an insight into one of the GAA's most colourful and inspirational characters. That insight is so moving because Cassidy meets every event head on and with unflinching honesty, as seen below when he talks about the death of his father and how it affected him.

'And just one day he left and he didn't come back'

Kevin Cassidy opens up about the death of his father, getting dropped off the Donegal panel and speaks about his wonderful career on @SportTG4, Laochra Gael on Thursday night🟢🟡pic.twitter.com/WghfUlaPuL 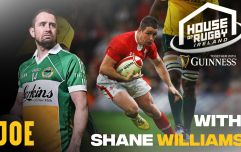 END_OF_DOCUMENT_TOKEN_TO_BE_REPLACED

From there, he talks club glory and he talks about 2012. Busts the myth that Jim McGuinness wouldn't have him back and in doing so, clears the Glenties man of any blame that may have been wrongly attributed to him over the years. That's life.

"He said, ‘Listen, we’ve no choice, we have to let you go.’ I stood up and shook hands with him."

“In April, Jim and I had a meeting. He said, ‘Listen, you’re welcome to come back to the panel. I didn’t think it would benefit Donegal if I was on the panel. I knew they were close to winning the big one, but at the same time, it just wasn’t right for me, and that’s the decision I made.”


popular
Referee Mathieu Raynal puts Sexton in his place after TMO mess
Owen Farrell rages at referee Pascal Gauzere as Wales catch England sleeping
Sexton compares "brilliant" Irish debutant Craig Casey to Jonny Wilkinson
The SportsJOE 12 o'clock quiz | Day 308
Three Irish forwards stand tall in player ratings after Italy thrashing
"I was like, ‘My ear is hanging off my head. Can you not see that?!'"
QUIZ: How well do you know Manchester United players of the 2010s?