"Unless God Almighty comes down and sits in the disciplinary hearing."

Joe Brolly was in flying form on SportsJOE Live on Wednesday evening and himself and Colm Parkinson got into many the heated discussion.

END_OF_DOCUMENT_TOKEN_TO_BE_REPLACED

After they had thrashed it out about Paul Galvin's claims that The Sunday Game was a liability to both the GAA and RTÉ, attention turned to another broadcaster, Sky Sports.

Brolly joked that more people went to mass in Donnybrook than watched Sky Sports and added that Parkinson was only bringing up the issue because he wanted to get on RTÉ himself.

Parkinson stated that fellow panellist Ronan O'Gara's favourite pundit, Conor O' Shea, was unique because he was fresh and young beside George Hook and Brent Pope.

END_OF_DOCUMENT_TOKEN_TO_BE_REPLACED

O' Gara argued that it was about getting "the dynamic right between the trio and the presenter. None of this 'you say this, you say that' - it's completely open agenda."

The SportsJOE Live host riled up Brolly again, however, by questioning whether RTÉ was completely open agenda or whether "you would be able to control what Dessie Dolan could say".

It was something that Brolly did not take lying down.

"I think that is very insulting to Dessie, Dessie is a very clever fella. It was a constant source of amazement to me. It seemed to me as if, Jim McGuinness, was imprisoned in a cage with Sky [Sports].

"I'll give you a good example, we went down to the Gaelic Grounds and it just gives you an example between a really commercial body like Sky who are interested in selling boxes and not offending the GAA and making sure relationships are right and ambassadors and all that stuff.

"Then something like RTÉ, when you love the game and say what's on your mind. The way anyone would after or before a game.

"Myself and [Colm] O' Rourke were sitting out on big packing crates while the people were streaming in because it took people [RTÉ] a bit longer than they thought to get ready.

"Sky had been rehearsing, Darragh Ó Sé had told me this, for two hours with the doors barred. There were thousands of people, schoolkids and all coming up to me and O' Rourke for photographs and selfies and that.

"Each time when a group would come up, I'd ask them 'does anybody here watch Sky?' and they would go 'oh absolutely not'." 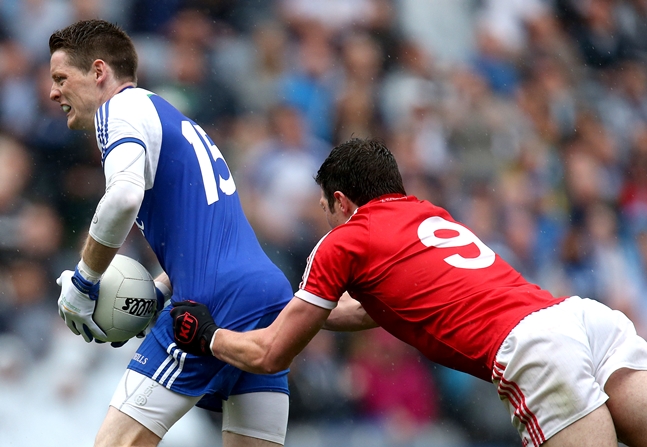 Parkinson wasn't giving Brolly time to catch his breath and also tackled The Sunday Game pundit on the inconsistency between his "hatchet job" on Sean Cavanagh and his defence of Diarmuid Connolly's push.

"What was the hatchet job on Sean Cavanagh? When he pulled down Conor McManus it really particularly annoyed me. There was a picture of McManus sitting on my knee when we won Sam. He dreamed about it since he was a kid. He was through on goal, all he had to do was stick it in the net and Sean [Cavanagh] pulls him down.

"He knew what he did and urgently we needed to stamp that out in the game. It was systematically ruining the game and they [Tyrone] were using it as any other tactic."

Brolly believed that Cavanagh's behaviour needed to be stamped out but that Connolly's suspension was an unfair, bending of the rulebook.

"If it goes in the referee's rulebook it's dead in the water. Unless God Almighty comes down and sits in the disciplinary hearing and in those circumstances you still wouldn't get it over turned.

"In this case there is an additional note appended to the referee's book which says Ciaran Branagan, stand-by referee, reported to me after the game that he had been pushed by the Dublin number 11. He only remembered it after the game Parky."

You can watch the Sky-RTÉ debacle from 45:15 onwards and the Connolly-Cavanagh comparison from 29:35.