One of the most unlikable things about Dublin is that it's hard not to like them.

And that's honestly unnatural when you're not from the capital and watching them completely dominate Gaelic football. You want to hate them and find any little reason to stick it to them but, on the pitch, it's very damn difficult to uncover anything.

As individual talents, they're flawless. As a team, they are perfect.

All over the pitch, it's just pure strength. No matter where you kick it, where you try to exploit, there's no weak link on that Dublin team and, from wherever they attack, they are devastating.

But they're decent men too. They get bad press for not always making themselves available to the media or for Jim Gavin's cautious words in interviews but they have a template for winning and that's all they give a toss about.

It doesn't mean they have any less class and, as Joe Brolly revealed on The Sunday Game after Dublin made it four-in-a-row, James McCarthy went out of his way to congratulate the RTÉ pundit on what was ahead for him before the final.

25 years ago, Brolly was corner forward on the Derry team that won the county's only All-Ireland senior title and they were being honoured in Croke Park before the showpiece in 2018. 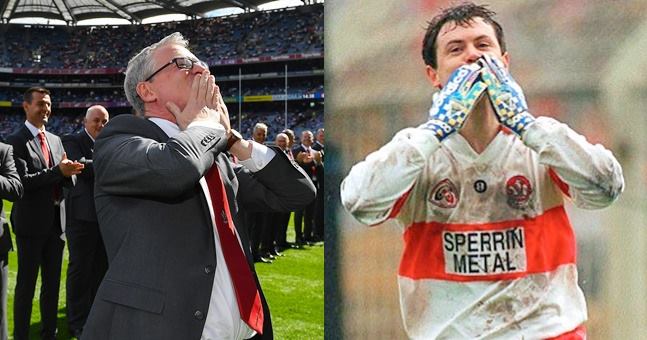 And McCarthy recognised what an important moment that was for the Oak Leaf Gael and reached out to tell Brolly how much he enjoyed watching that Henry Downey-inspired Derry outfit of 1993.

"James McCarthy, out of the blue, I got a text from him on Friday.

'Joe, I hope you enjoy your big day on Sunday. It is well deserved. I'm looking forward to seeing you. I have fond memories of that team.'

"These are classy guys who know something about the past and of Dublin of the future and they're there passing these jerseys on.

"They play with great respect and dignity for the game."

The Ballymun native, man of the match in last year's All-Ireland final, spoke straight after the game and paid tributes to his team mates.

He discussed what a tight group the Dublin panel is, how they train and socialise together, and it was clear that, even after winning four on the trot, it still means as much to him.

James McCarthy reflects on another All-Ireland win: "We're such a tight group. We're best friends. When all the work comes together it's special." #DUBvTYR #GAA pic.twitter.com/uzJkvcqMi6


popular
Rob Kearney taught a classic GAA lesson when he tried to have the craic in second game back
Ex-Down boss Paddy Tally will be part of Jack O'Connor's staff if he's offered the Kerry job
Shane Lowry had no problem setting reporters straight at Ryder Cup briefing
Meath superstar named player of the month after sensational final performance
GAA could learn a thing or two from AFL's parade and self-promotion
The scenes in Newbridge as the biggest hit and hope ever knocks Moorefield out
The SportsJOE 12 o'clock quiz | No. 384
You may also like
2 weeks ago
The scenes in Croke Park will have young girls saying 'why not me?'
1 month ago
"The pictures making out it was an elbow are a disgrace on John Small and his reputation as a footballer."
1 month ago
The show of respect between Lee Keegan and John Small is what Dublin-Mayo is all about
1 month ago
"It was a bad call by me" - McStay rows back on his commentary of McLaughlin hit
1 month ago
Diarmuid O'Connor made Mayo believe with a moment that will go down in GAA history
1 month ago
Aidan O'Shea gets into it with Philly McMahon as Mayo stun Dubs
Next Page