74 minutes into a pulsating, intense All-Ireland final and Dublin had just dragged themselves back from the brink.

Jack McCaffrey stepped up and would play key role in ensuring his side could not lose a game that would haunt them for decades. It was typical of a performance that man of the match accolades often fail to do full justice to.

On 66 minutes, Kerry hit the front when Tommy Walsh then Sean O'Shea curled efforts over the bar in quick succession.

END_OF_DOCUMENT_TOKEN_TO_BE_REPLACED

All over Croke Park, Dublin fans started to gnaw on nails and twist the life out of the match programmes. Jack McCaffrey called the ball on himself and, along with Ciarán Kilkenny, sought to punch holes in the Kerry defence.

Play drifted into injury time and Cormac Costello looked to have levelled the scores, only for Hawkeye to butt in and give it the big Níl.

Diarmuid Connolly was on the pitch at this stage and when he reeled off a sliced, outside-of-the-boot effort from 40 yards out, those in navy and blue lifted from their seats. That fairytale was not to be as the shot arrowed to the right and wide. Time ticked on.

In the closing stages, everything seemed to be going Kerry's way.

END_OF_DOCUMENT_TOKEN_TO_BE_REPLACED

It's funny how an invincible team can suddenly look all too human.

Still, this Dublin team is made of stern stuff. You may keep four or five lads quiet but they have born winners littered all over the park. McCffrey and Kilkenny kept at it and Eoin Murchan bombed onto a ball and tore into the Kerry 45. He suddenly looked hesitated, not willing to shoot, and sensibly popped a pass to Dean Rock, who swung the equalising point over.

The scores were level and the Kerry lads realised their chance to shock the reigning champions, and the nation, was slipping away. Green and gold jerseys streamed forward but Brian Fenton was there to block their path. The ball broke and McCaffrey was there to win his side a crucial turnover, and free.

Dublin had possession back and that was Kerry's last opportunity in the game. There were 90 seconds left and Dublin wound the clock down until, with 20 seconds to go, they made their play and tried to get a man into scoring position. Sean O'Shea was drawn into a foul and Dean Rock had a chance to win it. His free, from an acute angle, curled left and wide and we were off to a replay.

Everyone could breathe again.

The only shame is that the replay itself will draw focus and, come September 14, many may forget just how well McCaffrey played. This was his final. The game in which he confirmed himself as the Player of the Decade. 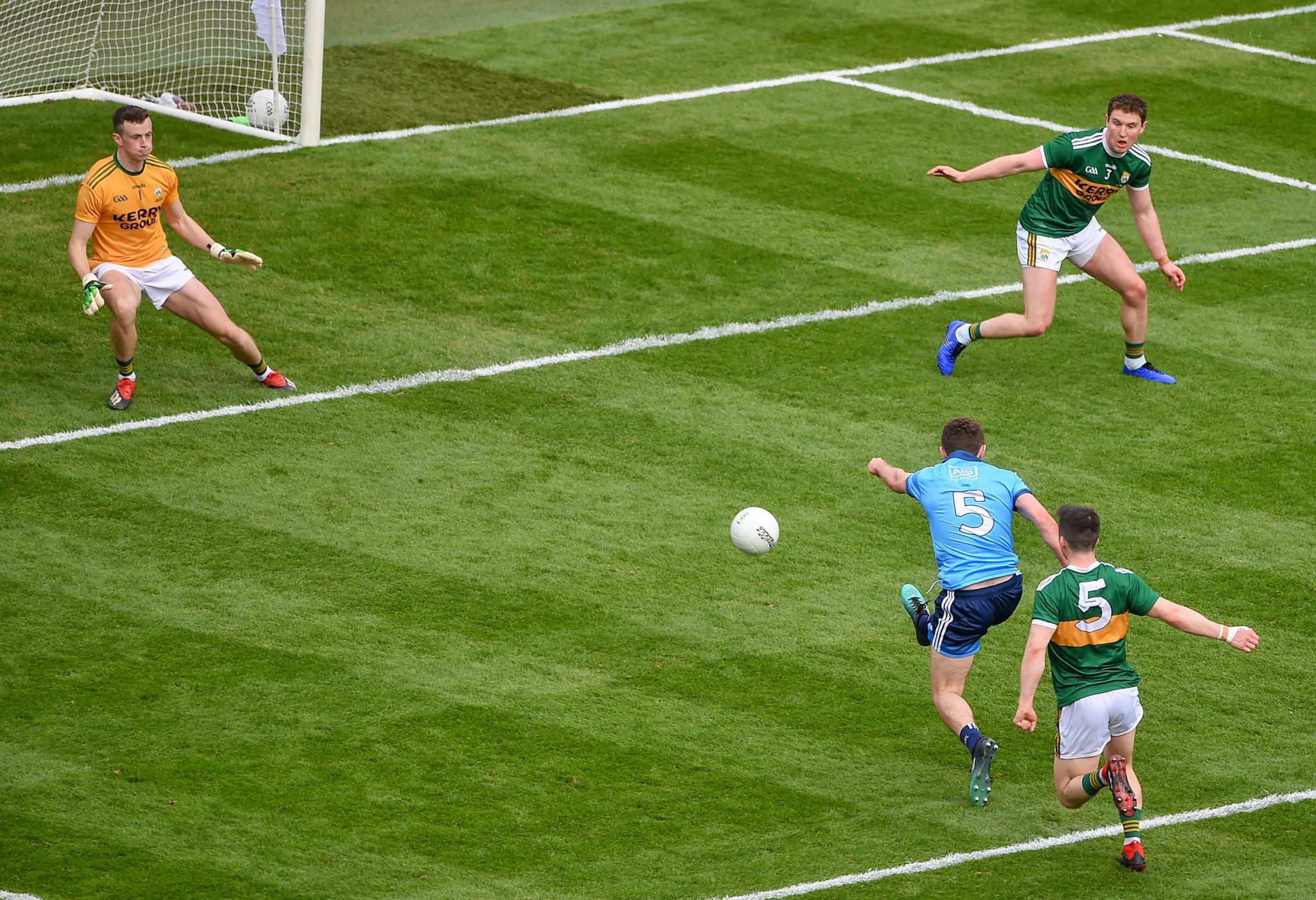 McCaffrey finished the final with 1-3 from play and had another shot blocked down for a 45 that Rock would knock over. The rest of the Dublin players combined for 0-6 from play and they were indebted to the Castleknock clubman.

Dublin were playing with 14 men for the bulk of a game that, with injury time in both halves, raged on for 80 minutes. That McCaffrey was still on a personal mission to cover every last blade on that vast Croke Park expanse says a lot for his fitness, commitment and zeal for the Dublin cause.

The Kerry defence handled the likes of Brian Howard, Con O'Callaghan and Niall Scully well but McCaffrey, bursting from deep, was the problem they could not solve.

Different players from the Kingdom tried to track and coral McCaffrey but most were left in his wake.

His goal after 18 minutes of the first half was pure McCaffrey. As soon as Howard fielded a Cluxton kick-out, he was away. He left four Kerry players trailing on a 70-metre pelt and still had enough class and composure to drive a dead-bolt past Shane Ryan.

Even more remarkable were his second half points. Dublin led by four at the break and knew they would have to do everything to keep Kerry at arm's length. Again, while others struggled, McCaffrey would arrive on the scene like a one-man possé.

Show for the ball. Get the ball. Dispatch the ball over the bar.

One of his points put Dublin five clear with 12 to go and it seemed to be the end of Kerry, only for Killian Spillane, O'Shea and Walsh to detonate the Dub's defence and throw the game into the mixer.

When the game, and the chance of five-in-a-row history looked to be pulling away from Dublin, McCaffrey gulped a lungful and got to work.

If Dublin do go on to win the replay, that achievement will stand on the shoulders of what McCaffrey did at Croke Park today.


popular
"Nowadays, even if I don't hit a ball, I don't care as long as we win" - Gleeson learning from the past
Cristiano Ronaldo 'agrees £173m-a-year deal' with Saudi club
Thibaut Courtois warns teammates after leaks emerge from Belgium camp
Argentina reach World Cup last-16 with convincing win over Poland
World Cup 2022 Day 11: All the major action and talking points
Damien Duff makes 'brutally honest' England World Cup prediction after Wales win
World Cup 2022 Day 10: All the major action and talking points
You may also like
1 week ago
"I was living day to day" - Shane Carthy and Cormac Ryan open up about their past and present struggles
2 weeks ago
"I'll try get that little bit faster, that little bit fitter. I'll try to put on a bit more weight" - How Gannon aims to improve during off-season
2 weeks ago
"I couldn't get over the amount of differences between the hurling and the football" - Leaving hurlers was never an option for O'Donnell
2 weeks ago
Shocking scenes as brawl extends into the stands during Oulart-the-Ballagh vs Naomh Barróg
2 weeks ago
"We've kind of gone away from stats" - the personal goals Dias sets for himself each game as a midfielder
1 month ago
GAA JOE Team of the weekend
Next Page